Eight years ago, I learned I had a gene mutation that significantly increased my risk of developing cancer. Breast and ovarian are two of the cancers I am at a higher risk for, so with the support of my doctor and my family, I chose to have a prophylactic bilateral mastectomy and complete hysterectomy/oophorectomy. I had my breasts, uterus and ovaries removed to lower the risks as much as I possibly could.

I was only 29 at the time, but I wanted to stop the cycle of cancer...and, thankfully, so far so good.

Finally, on 12/12/12, I had extraction surgery and my life truly started over. My discomfort was gone. I started looking at myself differently in the mirror. I felt better about myself than I had in years.

But I realized there's a whole host of challenges living without breasts in a boob-obsessed world. I realized I didn't have many people to talk to about my new life. Some of my friends had hurt me by not supporting my decision, and others simply couldn't understand what I was going through. Not even other women with mastectomies could relate since it seemed like everyone was living with reconstruction.

There was one incredible woman, though, who I was able to turn to. I met Barbie through the SCAR Project, an empowering photography series about breast cancer that shows women's bodies after surgery. Barbie had chosen to be flat after her mastectomy and was a source of inspiration and encouragement for me. 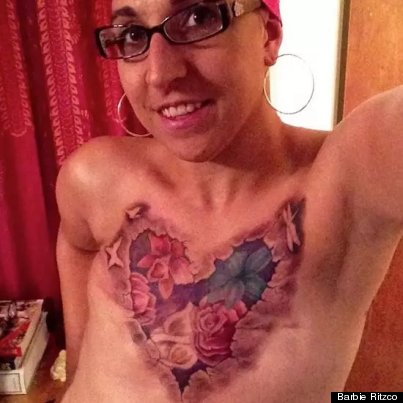 In January 2013, I talked with Barbie about starting a closed Facebook Group for women living without reconstruction after their mastectomies. I wasn't sure if there would even be other women out there who would join, but Barbie said right away, "If you don't do it, I will!" So we created the group together, and we've been partners ever since.

We called the group "Flat & Fabulous" because Barbie was always a huge advocate for women to "flaunt your flat." We didn't want to make just another cancer group. We wanted to make the community about empowerment and helping women find their beauty and strength. We also wanted a place where we could talk privately about anything related to our common reality -- from talking about whether other people can tell that we don't have breasts to deciding on what kind of bathing suit to wear.

What I thought would be a group of maybe a dozen people has become a group of nearly 1,200 members. It has been both validating and heartbreaking to hear from so many women who never knew there other women like them until they found our group. There's a perception out there that nearly all women choose reconstruction after their mastectomies, but it turns out that the majority don't. We want to help educate people and give them the support and information they need to decide the best path for them.

When I look back, I remember vividly the isolation I felt before my prophylactic mastectomy and again, feeling in the extreme minority as I was considering my extraction. I don't want other women to feel alone just because society only shows us one view of the world.

If you have chosen not to have reconstruction or are considering this choice, join our Facebook Group, Flat & Fabulous. And if that isn't you, you can still like our public Facebook Page to help send the message that flat is beautiful, too.

Sara Bartosiewicz-Hamilton lives in Vicksburg, Michigan. Through Flat & Fabulous, she seeks to support and empower women to embrace life without reconstruction after mastectomy.