REPRINTED BY PERMISSION OF THE NATIONAL INTEREST

"Anonymous sources within the US Navy's senior command have revealed that the US is not concerned over any immediate threat from the introduction of China's latest aircraft carrier in the Pacific, the Liaoning."
-- Defencereport.com

China's only aircraft carrier, the Liaoning, is a great source of national pride. It is also a grim symbol of the arrogance of an American defense establishment that largely dismisses Beijing's under-sized training carrier as an antiquated bucket of rusty Soviet bolts.

The prevailing Pentagon opinion is not wrong, at least when viewed through the keyhole of tactics and short term thinking. The Liaoning is indeed a refurbished Soviet carrier originally launched in 1988 that the Chinese picked up for a rusting song from the Ukraine in 1998.

The Liaoning is also a bit undersized. Its deck is just shy of 100 feet shorter than a American supercarrier like the Nimitz.

These limitations of the Liaoning notwithstanding, there is also this stark reality: In an era of a rapidly shrinking American fleet, the Liaoning and its picket ships and air wing pose a growing threat to many of China's neighbors in the South China Sea, particularly the Philippines and Vietnam.

For example, Beijing's revanchist navy took the Paracel Islands from Vietnam decades ago in a fiery battle based on an ancient historical claim unrecognized by international law. It now periodically sends huge drilling rigs backed by military forces into disputed areas of Vietnam's 200 mile Exclusive Economic Zone base - even as it engages in an almost constant bullying of Vietnamese fisherman, who have been driven further and further offshore.

In a similarly belligerent fashion, and with its growing naval forces and paramilitary China Marine Surveillance ships as the tip of its spear, Beijing has also taken land features from both the Philippines and Vietnam in the Spratly Islands - with full American acquiescence. These land features, in turn, have been transformed into "unsinkable aircraft carriers" replete with 10,000 foot runways, missile-guidance capabilities, and sophisticated sonar and avionics with which to track enemy shipping and aircraft - forcing an "under-shipped" US to futilely send "freedom of navigation" patrols into the area. 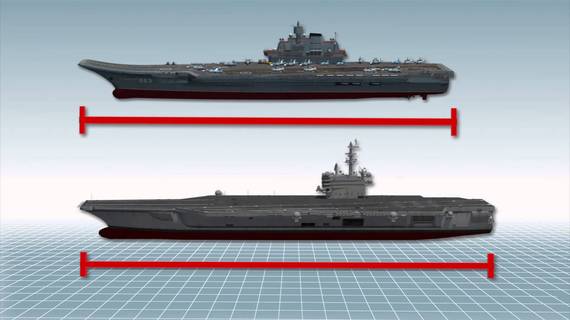 As to where the Liaoning fits into Beijing's overall pattern of revanchist aggression, Heritage Foundation scholar Dean Cheng has succinctly captured the essence of a problem that the Pentagon has woefully failed to acknowledge:

When you look at the South China Sea and when you look at where various countries have their airfields and their air forces, what you can very quickly see is that much of the South China Sea is very far from land. So, as a result, if you put even a small aircraft carrier there, what you can create is something like an air defense bubble; and one of the lessons the Chinese have taken away from the wars of the past twenty years - Desert Shield, Desert Storm, the Balkans, Afghanistan - is that air superiority is essential to winning modern wars.

You may not win with air superiority, but you will certainly lose without it; and so the ability to deploy an aircraft carrier, even if it is just to keep three or four modern aircraft overhead, is a huge advantage when everybody else in the area really can't put any aircraft overhead for any sustained period of time.

As for the Liaoning's broader strategic value, China looks to be playing the kind of long game that American leaders simply don't have in their intellectual and strategic wheelhouse. The White House and Congress are all about today and tomorrow. China's authoritarian junta is all about the 21st century. And the Pentagon doesn't really seem to grasp the fact that a threat to the Philippines or Vietnam from the Liaoning also poses a threat to the US presence in the Asia-Pacific.

From this perspective, the Liaoning should not simply be dismissed as a "training carrier." Rather, it should be seen as the first step in China's fielding of a fleet of flattops that will pose an ever-increasing threat from the Persian Gulf and Indian Ocean to the South China Sea, the East China Sea, and the waters of the Pacific out to the Second Island Chain and beyond to the Hawaii.

Here, no one should doubt the ability of China to steal America's aircraft carrier technology and eventually sail fine ships - it's stolen virtually every other major weapons system from the Pentagon. Nor should anyone doubt the ability of China's shipyards to rapidly churn out carriers - even as American shipyards whither and die on the budget sequestration vine.
_________________________
Peter Navarro is a professor at the University of California-Irvine. He is the author of Crouching Tiger: What China's Militarism Means for the World (Prometheus Books) and director of the companion Crouching Tiger documentary film series. For more information and to access film interview clips, visit www.crouchingtiger.net or see his book talk on CSPAN2.