A few nights ago I attended a hot yoga class on a whim. For the class, I didn't wear a shirt. A seemingly functional, but incredibly emotional decision.

I had an alternate option: the undershirt I had worn to work (hot yoga was an impromptu decision), which meant I would be commuting home in a soaked, salty tank top. But the real reason I wanted to go à la sports bra was on principle.

You see, I have not been feeling very confident about my body as of late. The change of season brings along with it the added comforts of unshaven legs, clothes with pockets, and cozy sweaters to hide my body. Crop top hell hath past. Hiking, swimming, climbing, spontaneous frisbee, and free yoga in the park are replaced by long nights curling up with a mug of hot chocolate (or a bottle of wine) and cookies (or cheese, if you went the wine route like me).

What I mean to say is that "summer body" and "winter body" are a thing for me. Whether it is a good thing or a bad thing isn't the point -- it's a thing, it exists. But when faced with covering my "winter body" in a hot yoga class or not, I chose to not. A silent rejection of the idea that only certain bodies which meet a very high standard set by society deserve to appear in public. My own personal protest.

Let's be honest: The only reason exposing my midriff was an emotional experience is because society has drilled into my head (and everybody else's') that women should hide their rolls, their chub, their cellulite, their curves -- their lovely lady lumps.

Photoshop 1.0 was released in 1990. One year before I was born. There has been no point in my life where magazines, commercials, TV shows, films, or even textbooks didn't use digitally-altered images. Photoshopping became a widespread practice in the late '90s for not just magazine covers, but all professionally produced media, and a new aesthetic norm became established. One where laugh lines, stray hairs, C-section scars, and a perfectly normal distribution of fat on women's bodies became unacceptable.

That's what it means, right? When something is photoshopped away, it's because somebody has decided it does not contribute to the beauty of the image. It detracts. It is unwanted. It's ugly. It's an eyesore.

As "impossibly beautiful" became the new normal, women attempted to follow suit to varying degrees of success. The Agency for Healthcare Research notes that there was a 119 percent rise in hospitalizations for eating disorders among children during the years when Photoshopping became widespread (1999 - 2006). Around the same time cosmetic surgery procedures skyrocketed 446 percent. When I graduated high school in 2009, two girls in my class received breast augmentations as graduation presents from their families.

Exposing my midsection made me wholly uncomfortable for the duration of the yoga class. Every bend and twist highlighted handfuls of flesh I wished weren't there. Warrior Two directed my gaze into the mirror, where instead of experiencing zen I winced from being forced to look at myself from the side.

But point is that there was no rational reason why exposing my midriff should make me uncomfortable -- in fact considering it was a hot yoga class, going shirtless logically should have made me more comfortable. I was uncomfortable because society tells us it's unacceptable, shameful, or at the very least not optimal for a women to dare to display her body when it does not fit our mold of the "ideal." So the "normals" hide. Which is what I perversely wished to do as well.

It is a fortunate coincidence that I have the unique joy of working with Jessamyn Stanley -- yoga instructor, body-positive advocate, and self-professed "fat femme." Jessamyn knows that representation matters, and believes it is so important for others to see a larger-bodied person completing postures and moving freely with confidence. But not only does Jessamyn show that people with bodies society has deemed "less-than" are fully capable of practicing yoga, she doesn't hide her body in any of her yoga videos.

Watching her perform yoga shirtless and so full of confidence gave me confidence in return. Not because of a nasty "well at least someone fatter than me is going shirtless" attitude. But because the confidence Jessamyn had for her body made me think that one day, I could feel that confident going shirtless, too. Even if it was just for a moment, in that moment Jessamyn helped remind me that our bodies are perfectly normal.

When I saw her yoga classes, I saw Jessamyn refusing to hide, instead choosing to re-normalize what we perceive as "normal." Why exactly do we need this re-normalization to happen?

Twenty years ago, the average fashion model weighed eight percent less than the average woman. Today, she weighs 23 percent less. The average model is thinner than 98 percent of American women, and only five percent of women on the entire planet naturally sport model-like proportions

William Leith over at The Telegraph writes

The Big Bang Theory features four normal-looking blokes and a stunningly beautiful woman. New Girl is about two normal blokes, a guy who's quite good looking, and two women who are... yes, strikingly beautiful. When I watch the news, on whatever channel, it's presented by the classic partnership of an ordinary-looking guy and a gorgeous woman. After the news, I watch the weather. Male weather presenters look like standard males. Female weather presenters look like models...

If you're a woman, a huge proportion of your role models are beautiful. So if you're normal looking, you feel ugly. And if you're merely pretty, men feel free to comment on how un-beautiful you are.

We as a whole have forgotten what "normal" women's bodies look like. When the only images we are exposed to have been digitally altered to perfection, it is easy to lose sight of reality. Looking at a "normal" body, an unretouched photo, after years image manipulation can be as jarring and strange as exiting a movie theatre during the daytime. It's been so long, our eyes have adjusted to something else. 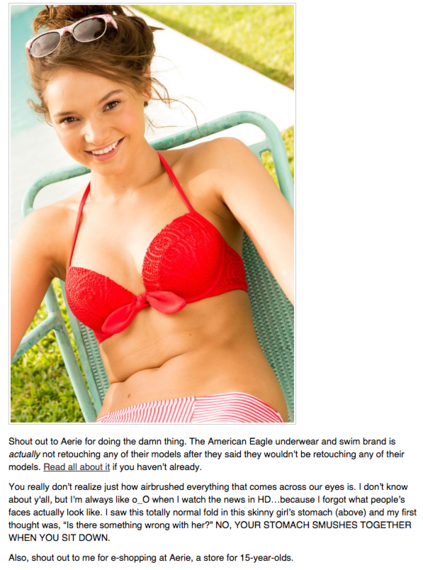 We have forgotten that perfectly healthy bodies have chub. We have forgotten how to be accepting of our own bodies. We have forgotten that we're perfectly normal. Perfectly beautiful. Perfectly great. And god damn it, if I have to be a one-woman crusade in showing people that it's ok for your belly to pooch over your waistband, then I'll do it. Because all over the country there are completely healthy girls so ashamed of their bodies they are hiding under baggy clothing, crying in dressing rooms, surreptitiously examining their stomachs in every reflective surface they pass, and experiencing anxiety over f*cking swimsuits.

And that -- to me -- is what is truly unacceptable here. Which is why I made myself uncomfortable for an hour of yoga, in hopes that I've added a little drop into a growing ocean of awareness and acceptance of all bodies.

Because women are slowly reclaiming their bodies and someday "Mom Bod" will be a good thing, a representation of the fortitude of motherhood. Cellulite will not be derided as "cottage cheese thighs," but something you have in common with Nicki Minaj.

Confidence is contagious. Maybe I wasn't 100 percent comfortable with my body during that hot yoga class but maybe, just maybe, it helped someone else in the class feel better about hers. But one thing is for sure: I'm done hiding, because having a little flub on my tum is nothing to be ashamed of. And the next time I go to hot yoga, I'll take off my shirt again and just roll with it.