Look closely and you can find me in the picture below. It was taken last month at the National Press Club. The occasion was the release of the Black Women's Roundtable 2016 election voter guide and the results of its survey of Presidential candidates. A black colleague of mine had invited me to join her. 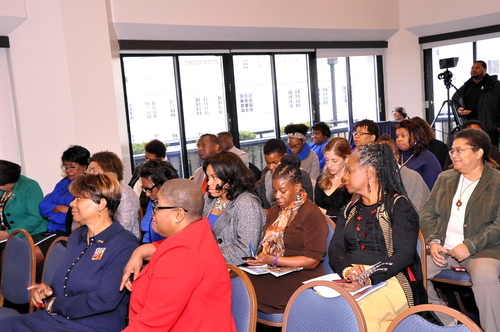 Excited by the panelists' presentations, I began to live-tweet.

One panelist, speaking of the need for black women's activism and leadership, proclaimed: "Black women must fight in the streets, sit at the head of board rooms and be delegates at the Conventions for both presidential parties."

As I typed that inspiring call to action verbatim into my Twitter box, it occurred to me that some followers might misinterpret "fight in the streets."

I showed my draft tweet to my colleague for her opinion, but she had a different concern. "You are a white woman," she explained. "You cannot say what black women 'must' do." She also suggested a better way of saying "fight in the street."

I had thought that my words, even though unattributed (because of space), were traceable through my previous tweets and the event's hashtag to a black speaker. The reality, though, was that people could also read my tweet, as written, to be a white woman telling black women what to do.

My friend's reaction stuck with me. I had to combat some feelings of defensiveness and felt awkward that I had completely missed her concern. My original tweet seemed to put my white privilege on display.

As I have written about before, my white privilege can make me blind to black people's different perspectives. I am pretty sure that I would not have missed the problem if a man attending a women's rights event had tweeted about what women must do. Even worse was the thought that I might not have noticed the problem because on some subconscious level I somehow felt comfortable publicly declaring what black women must do. Ugh.

My friend's reaction taught me an invaluable lesson. When I engage as a supporter of racial justice (and in life outside of intentional advocacy), I must be as conscious as possible of where my words or actions either are, or could be perceived to be, perpetuating existing power dynamics around race.

It was not long before I learned another lesson. In writing this article, I interviewed Reverend Jennifer Bailey, whom I first met when she spoke at the Union for Reform Judaism's Biennial this past winter. At the beginning of our conversation, I explained that I was writing an article about how to be a good "white ally," and then prepared to move on to my list of questions.

Reverend Bailey was not ready to move on.

"I have wrestled a lot with the term 'allyship,'" she explained. "It still centers whiteness in the conversation."

"I am still wrestling with it, but I prefer the term accompaniment. It's about the ability of white people to be led by people who don't have the same background or may not have the same education, but have something prophetic to say. Like the words of a young black boy who is 17 without a high school degree who might be speaking a certain truth. People have abused allyship to elevate their own voices or center whiteness where it should be about listening to those at the margins."

Just like at the Black Women's Roundtable event, I had arguably chosen language that conveyed the very white privilege I had showed up to work against. But again, I learned something critical from being challenged. White supporters of racial justice need to be sure they are recognizing in their words and actions black people's rightful role as leaders of this movement for change.

Still, like before, my discomfort about my original word choice lingered.

In Uncovering My White Privilege on Yom Kippur, an exploration of white privilege on the Jewish Day of Atonement, I explained that my discomfort about white privilege stems from a myriad of emotions including guilt, defensiveness and feeling responsible.

Today, I am adding to that list my fear of appearing to assume, and of assuming, an inappropriate level of power when I accompany my black brothers and sisters in their work for justice.

I have begun to notice how common this sentiment is.

Is this awkward? / Should I even be here marching? ...
I want to take a stance cause we are not free / And then I thought about it, we are not "we" ...
Is it my place to give my two cents / Or should I stand on the side and shut my mouth for justice?

This past November, my oldest daughter, a white freshman at the University of Michigan, joined a group of predominantly black classmates at a rally to support students of color at Mizzou. In the middle of the rally, she wrote a poem called "Listen" (excerpted below), also about her struggle to figure out her role:

She concludes with the best she can offer- a commitment to try to do it right:

Both my daughter and Macklemore were clearly trying hard to be white supporters of racial justice. In my experience, the fact that they were trying is more important than any missteps they might have taken as participants.

I have learned that my black colleagues and friends are aware of my genuine intentions. I believe this is a key reason why they have invested in me by challenging me to see where my white privilege is getting in the way.

I imagine they do so in the same spirit Dr. Martin Luther King Jr. described in his "Letter from Birmingham Jail." In the letter, Dr. King responds to the public statement of eight white Alabama clergymen, urging him to abandon his strategy of civil rights demonstrations in Birmingham for fear that it would not be constructive.

Dr. King begins his letter by explaining why he bothered to take the time to respond:

"If I sought to answer all of the criticisms that cross my desk, my secretaries would be engaged in little else in the course of the day, and I would have no time for constructive work. But since I feel that you are men of genuine good will and your criticisms are sincerely set forth, I would like to answer your statement in what I hope will be patient and reasonable terms."

Because Dr. King believed these white men of faith were well-intentioned, he gave them -- and all of us -- the gift of one of the landmark civil rights documents of all times, filled with the promised patient explanation of the perspective the white clergy could not see.

I have accepted the steepness of my learning curve. The more I show up to participate in the work of racial justice, the more I risk bringing along and demonstrating my white privilege. Although when this happens it is both upsetting and uncomfortable, I am becoming less afraid. My experience has taught me that my black friends and colleagues, knowing my true desire to become the most effective "accompaniment" I can be, will continue to challenge me in these moments. From these challenges, I continue to get better at knowing when to challenge myself.

And so, flawed but determined, I continue on my journey as a white supporter of racial justice.