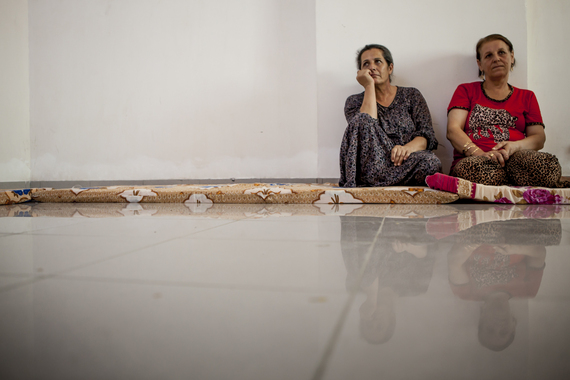 Khalid Zaki is an acting coach. A few months ago the 35-year-old Assyrian Christian stage managed Shakespeare's Merchant of Venice at a local theater in Qarakosh. Today, he is one of approximately 100,000 Christians who sought refuge from the wrath of the Islamic State in and around Erbil, the capital of the Kurdistan region of Iraq.

"We came here in the morning of August 7, most of us with nothing but our clothes on," Khalid recounts. The Christian exodus was total. More than 40,000 Christian refugees fled Quarakosh -- until then the largest Christian town in Iraq. According to refugees interviewed, there are but 120 Christians left in Qarakosh, who are employed by the Islamic State as auxiliaries to prevent looting in the abandoned Christian homes.

In Erbil, Nazar Hana, a manager at the Nisthiman Mall in the city center, opened up the whole sixth floor of the building to around 1,100 Christian refugees. Due to construction delays, funding problems, and local opposition by shopkeepers, the Nishtiman Mall was never completed and is now in a derelict state, with only a few shops open on the first and second floors, as well as a thriving black-market in the basement of the building.

The 1,100 refugees at Nishtiman Mall have benefitted from media attention to the plight of Iraq's minorities fleeing ISIS. Christian NGOs, UNHCR, as well as the International Red Cross are delivering food and medical supplies. Some of their living space is even air-conditioned which with outside temperatures of over 100 degrees is a vital necessity and in stark contrast to their lives two weeks ago.

And while there are only enough matresses for the women and children to lie down on (the men sleep on the marble floor), the mall refugees are better off than most of the other Christians, spread out in approximately 23 camps in the city and its vicinity, and who often have to make do with mere tents or canvases shielding them from the elements.

This, however, is little comfort for the displaced people of Qarakosh who see the most recent attacks as perhaps the final act in their expulsion from Iraq. Hundreds of thousands of Iraqi Christians have left the country in the last two decades. Estimates of the remaining total number of Iraqi Christians are as low as 200,000.

While sipping a cup of chai, Khalid Zaki recounts the last 24 hours in the city: "On the morning of August 6, the Pesh Merga promised to defend us to the death and we believed them once the
shooting started."

IS fighters began shelling the city with both artillery rounds as wellas missiles. Soon the first casualties appeared.

With tears in his eyes, Kaleed Kackwani, a 27-year-old construction worker, tells the story of his neighbor's children who were killed while playing in the street. A shell exploded in their
midst, killing two boys, aged 12 and five, as well as a 10-year-old girl: "One of the boys was torn apart by the shell and all that was left of him was one arm and one leg. His family collected his remains in a nylon bag. People were panicking."

"Around 5 p.m. we gathered for the funeral of the children," continues Khalid, who lives in the same neighborhood as Kaleed. "Then the congregation held a service at the Church of Saint Mary. After the service I went home." On August 7, at 3 a.m. Khalid received the news that the Pesh Merga had started withdrawing from their defensive positions. He and his family lost no time. They got into their car and started heading towards Erbil. On the road they were held up at Pesh Merga checkpoints. "It took us five hours to pass one single checkpoint," tells Khalid.

Khaleed Kackwani explains that Ram, the brother of his wife, was hit in the head by a bullet while caught in the crossfire of IS fighters and retreating Pesh Merga forces at one of the three checkpoints that Kurdish forces had set up between Qarakosh and Erbil. "There was nothing we could do for him. We had to leave him behind. It took us 15 hours to cover the 80km from Quaraqosh to Erbil. The road was filled with cars and refugees. We were only allowed to pass the checkpoint one by one."

The same night ISIS suicide bombers tried to break through a Pesh Merga checkpoint with a stolen ambulance but were spotted and killed before detonating the charge.

In the room next to Khaleed's, Bydaa Bhnam Khtya, mother of three, also recounts the long wait in front of the checkpoints leading to Erbil. She and her husband owned a gas station and a chicken farm in Qarakosh. Dressed in pajamas, a baby girl on her lap, she emphatically states that she will not return to Qarakosh: " I do not trust the Pesh Merga anymore. They left us undefended. I do not trust anyone anymore connected to the Iraqi government."

Majeed Iyu Gorgies and his four sons fled on August 6. He sits on his bed in a small room on the 6th floor in the Nishtiman Mall resting his left leg on a worn out matrass. He lost his right leg in March 2003 during an American aerial bombardment at the beginning of the Iraq
War. He was sitting in a café in Mosul when the bombs were dropped: "It was March 31, 2003 at exactly 6 p.m. when three bombers dropped half a dozen bombs on our neighborhood. Nine people were killed and 45 wounded -- I was one of them." Numbers are still hugely important for the 55-year-old former teacher of mathematics.

Majeed Iyu Gorgies story is typical of the lives of many Christians in Iraq in the last few decades.

Majeed wanted to become a teacher. He studied natural science and mathematics at Mosul University. Yet, two months after my graduation the war with Iran started. "I had to serve for five years in an anti-tank unit and fight on the frontlines. Only then was I allowed to begin teaching. After another five years the next war came and the school officials laid me off because I was not a member of the Baath party, and in addition, as a Christian, I was considered anti-patriotic." Until 2003 he had to work on various construction sites as a floor tiler, and, although the American invasion cost him a leg, he was immediately singled out as a traitor by Sunni extremists once the insurgency intensified in Mosul. In 2007, he had to flee his beloved hometown: "The extremists called us and told us that they would come over in 10 minutes and kill me and my family unless I left the town immediately." The family moved to Qaraqosh. Now in August 2014 they had to flee again.

According to some sources, Iraqi and Kurdish forces are planning the recapture of Mosul as well as Qarakosh. Yet only a few Christians are thinking of returning to the city once it is liberated. They are scared. According to Khalid many Muslims welcomed the IS fighters to Qarakosh. In disbelief he relates the story that former Muslim students of his tried to convince him on the phone that it was safe to return to the city.

"We will only return under the protection of an international intervention force," Rabee Yussef Sorani emphatically states, the unofficial spokesperson of the refugees at the mall. Majeed has resigned himself to indefinite exile, but like so many he does not know where to go: "Mosul, Qarakosh, and now Erbil! How far do I need to run to escape the war? Where do we go from here?"