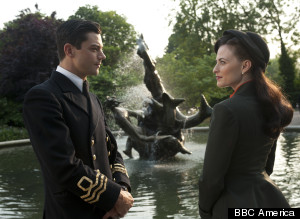 Would it surprise you to learn that the man who created Bond -- James Bond -- liked fast cars, fine living, custom-made cigarettes and cocktails made in a very particular way?

Probably not, but unless you've read a biography of Bond's creator, portions of the well-acted four-part miniseries "Fleming" (10 p.m. ET Wednesday, BBC America) may come as a surprise.

Dominic Cooper infuses the role of Ian Fleming with the right mixture of insouciance and world-weariness, and half the fun of "Fleming" is seeing what a failure the author was before he turned to spycraft and writing, two careers that turned out to be perfect for his strange emotional makeup and his odd mixture of talents.

When we first meet Fleming, he's in debt, flailing professionally as "London's worst stockbroker" and regularly infuriating his disapproving mother, who comes off throughout as a character straight out of a P.G. Woodhouse novel. Fleming has luck with ladies, but in all other respects, he's outshone by his far more respectable brother, who is regarded as the family's only promising prospect.

With his mother's help, Fleming stumbles into a job in the Navel Intelligence Division just as World War II begins, and that's when the story really gets going. Samuel West plays Fleming's boss with winning drollness, which helps to distract the viewer from some underwritten supporting roles, including a Fleming flame who's supposedly a prototype for a Bond Girl but is mostly forgettable here. Anna Chancellor ("The Hour"), who has been absolutely terrific in everything I've seen her in, plays a warm, witty Intelligence aide, and she adds a lot of spark to the scenes of Fleming at work.

It's a good thing that the actors know how to deliver this sometimes-clunky material, because dialogue is often all they have to work with. It's true that Fleming wasn't engaged in field work for most of the war, so scenes set in offices and luxury hotels make sense, but "Fleming" feels curiously constricted for a story about a well-traveled writer who created an archetypal "man of the world." There are some lovely sets and decent action scenes here and there, but the limitations of "Fleming's" paltry budget become obvious as it trundles through the author's pre-literary life. Don't come to this expecting the flash and big-budget thrills of a Bond film; like its overextended lead character, "Fleming" simply doesn't have the cash for it.

The drama is also almost hilariously unsubtle at times, as if it doesn't trust the viewer to have a working knowledge of the most basic Bond lore. Characters pointedly discuss Bond tropes like the "license to kill" and have to deliver lines that are painfully obvious or on the nose ("What made you like this?" "Ian's a puzzle!").

That said, Cooper does a solid job with the title role, and the early installments have an engaging briskness. Fleming is repeatedly told that war isn't a game, but the weapons and tactics of espionage suit his irreverent intelligence and lively imagination very well indeed. However, "Fleming" drags a bit in its second half; given its slender budget, it might have worked better as a three-episode miniseries.

Even if you're not particularly into Bond-ian history, a reason to give "Fleming" a try comes in the form of Lara Pulver, who manages to steal the show from its ostensible lead.

Pulver, who gave such memorable liveliness to Irene Adler on "Sherlock," plays Ann O'Neill, a society beauty with whom Fleming has a tortured love affair, and the actress gives texture, depth and pathos to O'Neill's emotional states. The Fleming-O'Neill affair goes around in circles a few too many times, but the fact that Cooper and Pulver are able to access the characters' brutality, affection and carnality so readily makes the storyline more watchable than it almost has a right to be.

Cooper's been burbling around the edges of film stardom for a while, but I wonder if the movies or the TV industry will figure out what to do with Pulver, who has a retro look but exudes a very modern confidence and intelligence. The fact that Pulver is stuck on "DaVinci's Demons" making do with material that is far beneath her talents is a migraine-inducing crime. But I have faith that, as was the case with Fleming, the talented Pulver will rise above the occasional indignities of her early career.

Podcast fans! There's a new installment of our TV gabfest, and Ryan McGee and I are excited to say that we've made some adjustments to the audio quality of the pod -- we hope you enjoy the new and improved version. Ryan and I talked about "Fleming," "The Good Wife," "American Horror Story: Coven," "Parks and Recreation" and "Looking" in this week's Talking TV podcast, which is here, on iTunes and below.