Ever wondered how to get that extra bag of pretzels during a flight?

Flight attendants have a lot of power in the skies, and it turns out some simple, easy-to-follow rules can be the difference between a stressful travel experience and an extra pleasant one.

While most airlines prohibit flight attendants from accepting monetary tips, there are plenty of little ways you can help make their days better, such as giving them your magazines, newspapers and books to read during breaks or layovers, or just saying hi when they welcome you aboard.

Flight attendant Galen David calls it “Jetiquette” -- the basic rules all travelers should know to ensure everyone -- passengers and flight attendants alike -- enjoys the ride.

For instance, Abbie Unger, a former attendant for United, Continental and US Airways Express and author of a book on career advice for flight attendants, told The Huffington Post that during boarding, “You would be surprised at the number of passengers who are so focused on getting to their seat that they completely ignore the flight attendant who speaks to them.”

Something as simple as saying hello and acknowledging your flight attendants can go a long way, especially since Mulder said flight attendants "have some of the most interesting stories [to tell], if you just take a second to listen.”

Consider it the Golden Rule of the skies. “It starts with the basics," Unger said. "Use the good manners that your mama taught you.” 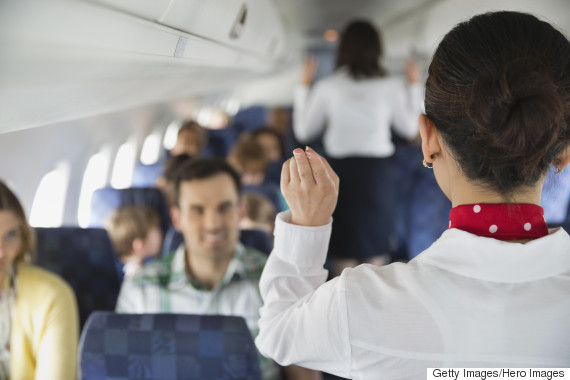 Flight attendants have a whole list of things to think about during a flight -- everything from making sure you’re boarded on time to running through emergency scenarios and getting food and drinks delivered efficiently.

They work strange hours in physically demanding environments, and they frequently deal with unpleasant or dissatisfied passengers.

Mulder, who also blogs on this topic for HuffPost, said that it’s all about perspective. “So often, as passengers, we think that the flight attendants are always supposed to smile, be beautiful, bright, and cheery. But we are just human… it's an airplane (not always the most comfortable), delays aren't the flight attendants’ fault, and it's the catering and management department -- not flight attendants -- who decide what food is served and if there are blankets."

Getting boarded on time is one of the flight attendant's most stressful tasks. Don't make it harder on them. Be sure to have everything you’ll want during the flight ready before you get on the plane. “Boarding take so much longer when a passenger is digging through their bag, looking for their headphones while standing in the aisle,” Unger said.

“It's walking on and not having these huge carry-on bags and clogging up the aisles when the flight attendants are under pressure to get everybody on and get that door closed,” David told NPR.

And if your bag is too heavy for you to lift, you should check it. Alice, a flight attendant for United Airlines who asked us not to use her real name, told HuffPost that most airlines do not let flight attendants pick up passengers’ bags.

“Because so many flight attendants have been hurt in the past from lifting passenger bags, the company has to pay occupational claims for their medical expenses. So most airlines have a standard policy now that we don't assist with bag lifting," she said. "Also, if we did it for one person, everyone would expect it and we would be lifting hundreds of bags a day.”

4. During the flight, plan ahead.

Alice added that when people don’t know what they want to order from the food cart by the time it’s at their seat, some passengers won’t get served if on a shorter flight. Remember, the menus are printed on most inflight magazines.

“Know what you want to drink before we get to your row, and already have your tray table down. Sometimes we have a limited time to do the service, and it goes way faster if people know what they want ahead of time.”

Giving a flight attendant a treat is a nearly-foolproof way to get them on your good side. David told NPR that flight attendants aren’t fed by the airlines and generally don’t have time to get something to eat during their 12-hour day.

Whenever Unger flies, she runs through the dollar store to pick up a bag of candy bars for each leg of her flight. “Giving the flight crew a little treat is just an extra special thing, and believe me, they will remember who you are and return the favor any way they can.”