In their southern world, dominated by wind and ice and water, penguins fly in the water while albatross rarely power their flight; they glide.

I learned this and more a quarter century ago when I visited their cold ocean and continent of ice and prepared a short series of lectures to the Yale alumni cruising to the Antarctic in December of 1990. The lectures were the dues I paid to join the trip.

Since then, I have updated my notes on that wondrous part of the world as I have become aware of new studies of these birds and their changing environment.

Antarctica wasn't always cold and remote from the rest of the world. It was part of the great southern continent block, Gondwana, binding what would become Australia, South America, Africa, and India together. 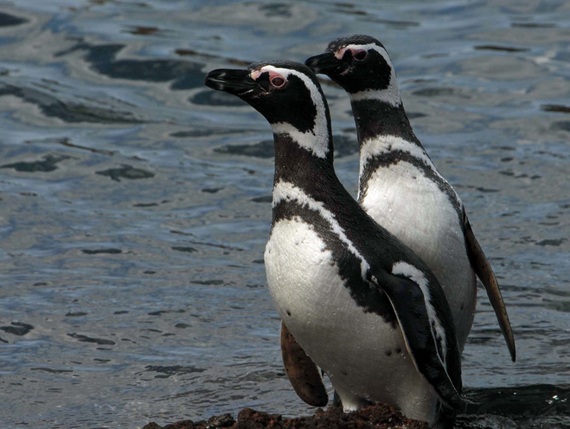 The essence of penguins is understood underwater with their aquatic flight, not from their awkward gait on land. These Magellanic Penguins have come ashore in Patagonia to tend to their dependent young in burrows. Photo by Steve Zack © WCS.

The breakup of Gondwana literally reshaped our world. It started some 180 million years ago. By the time Antarctica began to separate from Australia and South America (ca. 55 million years ago), the breakup had: allowed the mixing of the Atlantic and Pacific Oceans; created the Drake Passage; and, critically, set in motion the Antarctic Circumpolar Current.

The Southern Ocean emerged as a productive, cold, and windy ocean with ample ice.

The evolution of seabirds, prominently albatross and penguins, is tied to the emergence of that cold, windy Southern Ocean surrounding Antarctica. These birds -- and the whales, seals, fish, and other vertebrates tied to this frigid world -- all feed directly or indirectly on the hyper-abundant Antarctic krill (Euphausia superba), perhaps the most important single species of any food chain in the world.

Albatross fly tremendous distances in the open ocean. They have been shown to circumnavigate the globe in but a few weeks. They may fly 600 miles a day and 6,000 miles or more in single foraging flights to help gain food for their young nested on remote islands. They are able to do so powered by the wind of the southern world oceans employing "Dynamic Soaring."

The only energy the bird expends is in the turns. Specialized tendons "lock" the extended wing in place. Near effortless movement built on the energy of the wind.

The most abundant of southern world albatross, the Black-browed Albatross, has its largest nesting populations on Steeple Jason Island, part of the Falkland Islands/Malvinas. It was donated to our organization in 2002. This video gives you a sense of their near-effortless flight.

Penguins, so awkward on land, are brilliant fliers underwater. Their feathers are short and are distributed throughout their body (other birds have feather tracts and featherless areas). They move quickly (flying up to 15 mph) and the bigger species can dive deeply (up to 1,800 ft) and for long duration (more than 20 minutes). 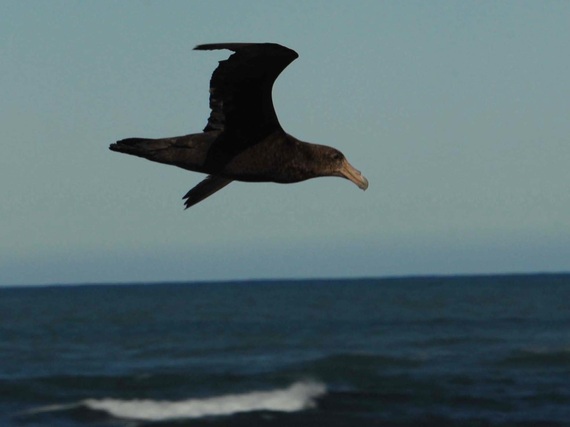 Giant Petrels, like their albatross relatives, use dynamic soaring amid the steady and strong winds across the southern oceans to move widely for food. Photo by Steve Zack © WCS.

The feathers trap air and compress those feathers upon ascent to inject trapped air. As a recent study proposes, this boundary layer ("air lubrication") reduces friction and drag while accelerating speed prior to "jumping" up onto land or ice from the water. The study's researchers used a recent David Attenborough film to expose and analyze this incredible phenomenon.

Alas, the Southern Ocean and its denizens are now at risk. Seabirds are the most threatened group of birds in the world. Global warming and growing industrial fisheries are a powerful one-two punch in this once remote part of the world.

A warming Southern Ocean means melting ice, freshening of the salt water, and acidification from absorption of more CO₂ and lower O₂ levels. Warming with acidification and deoxygenation of marine water is a signal common to the Earth's previous five biggest extinction events.

For penguins, recession of sea ice is very worrisome for haul outs and -- even more importantly -- because krill larvae depend on algae growing underneath sea ice. Less algae for krill means less food for the food chain. Our global protein requirement has also driven a doubling of the fisheries harvest for krill in Antarctica in recent years. Populations of penguins have declined up to 50 percent in recent decades.

Albatross are not only affected by the loss of their food to fisheries but are often caught by such fisheries -- both as bycatch and snared by hooks as they plunge to eat bait of long-lined fisheries.

As our increasingly connected world has brought the once-remote Southern Ocean and Antarctica closer to human populations than ever before, the 50-million-year history of penguins and albatross has been brought to the precipice in a span of a mere quarter century.

Their loss would be tragic conclusion to the fantastic evolution of these exquisitely adapted ocean flyers and wind-borne gliders.