Flint used to be a place of hope.

When Daddy and Ma came up from Mississippi with the first two of their six children, big tractor graders were out in the meadows cutting roads for new neighborhoods. A great post-war migration was underway from south of the Mason-Dixon Line to the steel and car and truck plants that were to set America rolling toward an almost incomprehensible economic boom.

And there was Flint, in the middle of all the prosperity rolling down the Dixie Highway from Detroit to Pontiac and up through Flint to Saginaw and Bay City. There was eventually so much demand for the sleek new Buick Dyna Flows and Chevy Biscaynes and Ford Thunderbirds that Michigan had giant factories just to build parts. AC Delco had a huge plant to meet the demand for spark plugs and Saginaw Steering Gear provided thousands of jobs in the river valley up near Michigan's thumb. 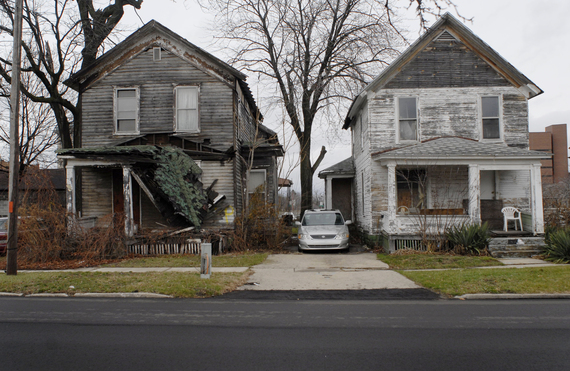 My parents were drawn up from the cotton fields of the rural South. Daddy wanted to be a farmer when he got home from France, but the best he could do was sharecropping and there was never a man who made a fortune growing another man's crop. They lived in a bit of a shack with no electricity or indoor plumbing and sheets were hung in the single room to provide privacy for sleeping and when the wind blew cold in the winter Ma said they tacked newspapers over the spaces between the wallboards because there was no insulation.

But the stories of jobs and gleaming new industrial cities in the Midwest kept making their way down the turn rows of the farm fields in the Mississippi Delta Country and Ma finally convinced Daddy they needed to buy bus tickets and go north. I have never come to understand what it must have been like for my father to leave the land and go to a city where he knew no one and had no skills other than growing and chopping cotton but I have felt my parent's bravery grow with the years.

"We didn't know what we were doing, son," Ma told me one day during a conversation at my sister's house up in Michigan. "We just knew we had to do something. Other people had left and made out all right and we thought we could get jobs. Everybody was getting jobs."

They ended up on a mattress on the floor of an elderly woman's house and Daddy got up every morning and went to stand in line outside a car factory door. A foreman walked down a line of waiting men and tapped the chosen on the shoulder and they got jobs. Daddy had broad shoulders from swinging a hoe and tossing hay bales into wagons and barn lofts so they gave him work, lifting bumpers out of a metal press at the Buick Division of General Motors.

A year later Daddy borrowed $500 from his sister and my parents made a down payment on a VA loan to buy a tract house in one of those multiplying subdivisions. The 850 square foot structure cost $10,500, had three tiny bedrooms, and a sapling punched into the ground of the front yard. The porch was a four by eight foot square slab of concrete but I remember there was a white flowerpot hanging beneath the picture window in the living room and it seemed like an extravagance not really intended for us "hillbillies." Daddy turned most of the backyard into a small farm and grew corn and radishes and even watermelons.

Ma got a job, too, as a waitress at a hamburger joint up at "The Point" where the two major highways intersected coming up from Detroit and the factory workers from the Tank Plant came in daily to order open-faced sandwiches and leave her dime tips. Ma's hair looked really dark and shiny against her white uniform and when she came home after her twelve-hour days she smelled of French fry grease and fish. She rarely made over $60 dollars a week and even when her wages were combined with Daddy's the $62 dollar a month mortgage was often late to the bank.

But there we were in Flint and the city streets were filled with waxy new automobiles that had crazy options like power windows and power steering and assembly line workers were often making enough money to buy weekend cabins on the pristine rivers in Michigan's north woods. There were still more forests then than there were tract homes and Daddy and his buddies from Dixie often went out at night with hounds and hunted raccoons that they brought home and skinned. There were sometimes coon pelts hanging and drying on clothes lines in backyards and the men who could not let go of old southern traditions tried to sell them to furriers like they were urban mountain men working their traps. When he was short of money for groceries Daddy also used to shoot rabbit and squirrel with his .22 and bring it home for Ma to cook but she made him do the skinning.

Daddy also used to take us fishing when we were little up on the Shiawassee and Flint Rivers but he did not like the Flint because he said the water was dirty. There were hardly regulations of any sort; no one wanted to get in the way of progress, and the river was brown with poison long before Michigan's current governor abandoned the city's residents. There has never been any one living around Flint who would have considered taking a drink of that water even at gun point so there is no surprise that a switch was made from Lake Huron to the Flint River as a water supply without informing the citizens.

I doubt I will ever be able to reconcile Flint's contemporary situation with what I saw as a young man coming of age. Our daughter cried as an 11-year-old the first time we drove her down Dort Highway on a visit because she could not understand what had happened to the buildings and the houses and why people still had to live among what seemed to her young eyes like ruins, which I guess, was kind of accurate. There was a time, though, people from all across America were hurrying to Michigan because we had jobs and the latest in technology and Motown's music filled the air. Unions had fought for health care and retirement and paid vacations and Michigan represented a future where a family did not have to work itself to death just to survive.

Automotive executives began to act as foolishly as politicians, though, and Flint decayed into an American Beirut. The factories kept building V-8 muscle cars while Japan was churning out economy engines that got three times the gas mileage. The market shrank for "Detroit Steel" and now there are great concrete slabs with weeds growing through the cracks where industry used to build cars and trucks and parts that made America run. A few years ago I drove past the vast concrete foundation that is all that remains of the AC spark plug factory and I struggled not to cry because I thought of all the people I grew up with who had spent their working lives on that floor. I suppose they are grateful for the time and the jobs.

Flint is mostly poor now and majority African-American and lacks any kind of political clout. When the state government and Governor Rick Snyder took over the city's administration they probably thought none of their decisions were likely ever to be called to account because the electorate lacked sophistication or influence. The governor apologizes as if what has happened to my hometown is a failure of the government's administration but it was a calculated decision he made with other elected leaders.

We live in a culture and a country now where people win elections by promising to cut government spending so our votes mean we are also responsible for our bad roads and failing schools and decaying infrastructure. Americans have been convinced that liars in suits can cut their taxes and still do them no harm, and Flint has become a warning sentinel that we cannot further tolerate such harmful political absurdities anywhere in our country. Thousands of children will have their development affected by lead poisoning because a corner-cutter did not want to pay a $100 daily bill for a city's water and because wretched pipelines have never been replaced.

Flint is a view into our tomorrows and we cannot fail to fix it and get it right. The population is animated and angry and there has to be collaboration between government entities or we will see the acceleration of a larger national deterioration. Blame, in this case, must be assigned and accounted for. Watch the news on television or the Internet and listen to the citizens and voters and you will believe they are not going to be treated poorly or denied basic services or the truth. The government might not lead us but there are families living along that river that will not compromise over the future of their children. The rest of us need to watch and learn and then act to rebuild our democracy to be representative and prosperous like Michigan when there was nothing over the horizon but another bright and optimistic sunrise.

Flint can still be a place of hope.

Also at: Texas to the World.