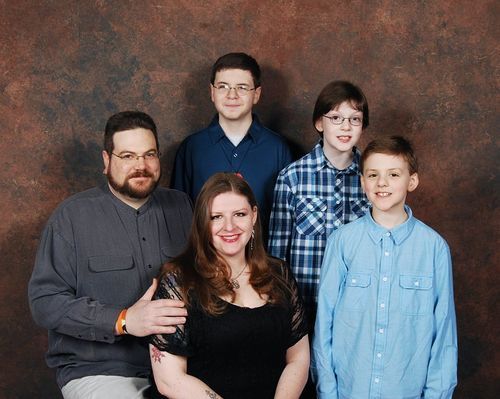 Most of us don't think twice about hopping in the shower or running a load of dishes in the dishwasher. But for Flint, Michigan, resident Melissa Mays, 37, these daily acts are fraught with anxiety and fear.

The city, where 41 percent of the population lives below the poverty line, has made national headlines in the past few months as shocking details have emerged about levels of copper, lead, and other materials in its water. These levels have had a disastrous effect on Mays and her family.

To save money, the city of Flint switched its municipal water source in April 2014 from the Detroit water system to the Flint River. Mays and her family began developing rashes; their hair started falling out. Now Mays strategizes, trying to minimize her exposure to the water. When her boys (11, 12 and 17) take baths, they can only use warm water -- never hot -- and they must use a cup to rinse the shampoo away. There's no lingering, and definitely no soaking.

Mays started talking to her neighbors, and she realized that other people were having the same issues. In January 2015, Mays formed Water You Fighting For, a grassroots organization dedicated to making Flint reconnect to the Detroit water system. She told The Stir her story.

The Stir: When did you first notice that something was wrong with the water?

Melissa Mays: It was about July 2014, after the switch [from the Detroit system to a new consortium, using water from the Flint River in the interim]. Our water started coming through yellow. The kids would come and find me, running and screaming: "Mom, the water is yellow!" Sometimes it smelled like rotten eggs, sometimes dirt. Sometimes bleach. Depended on what day it was.

Then the cat started throwing up and losing fur. You'd pet him and his fur would come off in clumps right in your hand. He used to be bunny-soft, but now, his fur is rough and coarse. Same thing with my sons. Their hair went from being long and silky to rough and wiry. That's caused by copper, which strips the collagen from your system. Copper, lead, chromium, aluminum, and tin, that's what we have in our water. Around the fall of 2014, my hair started falling out, too.

The Stir: What were some physical symptoms the whole family started to experience?

MM: The biggest thing was rashes, bumpy and lumpy. I went out and bought eczema cream, but it didn't work. You couldn't put makeup or lotion or anything over it -- it burned when you touched it. It feels like a chemical burn on our faces, backs, and arms. There was nothing I could do to soothe it.

The Stir: What did the city of Flint do to notify people of the problems with the water?

MM: In September 2014, we saw on Facebook that there had been boil advisories for E. Coli. That was how they notified the citizens -- just put it on Facebook. They told us if we boiled the water, it would kill the E. Coli. But here's the thing: When you boil water with metal in it, it becomes more concentrated. Then it enters your bloodstream directly. So basically, they were poisoning the city by telling us to boil the water. They knew that and they didn't tell us. They should have told us to use bottled water and a filter. People were showing up at meetings with brown, red, yellow water, and [the officials] just said, "You have a rusty pipe, you have to deal with it." They took away our ability to protect our families.

MM: My kids were complaining of muscle and bone pain. I was feeling it, too. Our arms hurt, our bones hurt. And then one day my 11-year-old son -- who was otherwise healthy -- fell over on his bike and his wrist shattered. The doctor didn't understand why it shattered so easily, but it turns out lead makes your bones weak. I knew nothing about bad water and what it could do. Now I know.

The Stir: And how about you?

MM: I'm ANA [antinuclear antibodies] positive now. My DNA is so damaged, the antibodies are attacking my joints, brains and liver. I have seizures now. My liver is starting to fail, and I have the beginning of cirrhosis. When's the last time you heard of someone getting cirrhosis of the liver from drinking water? I was diagnosed with thyroiditis, an autoimmune disorder, and all of us developed upper respiratory infections. I also have osteoarthritis. I'm 37, and I hurt every time I move.

The Stir: When did you stop using the water?

MM: We stopped drinking the water in September of 2014 and stopped cooking with it in January 2015.

The Stir: What did you do as soon as you found out about the lead poisoning?

MM: As soon as we found out that we had lead in the water, we got our blood tested and it was heartbreaking. We had been talking about the dangers of lead, but since our water was never brown and they told us it was safe [we didn't know].

The Stir: And you have to pay for this water, too, correct?

The Stir: And it's illegal not to pay your water bill.

MM: Yes, not to pay it would be in violation of child safety laws. They would condemn your house and take your kids and put them in foster care. Forty-one percent of us live under the poverty line. Meanwhile, right next door, Flint Township [which was not switched over] pays $40-50 a month for safe, clean water.

The Stir: Do you think this could happen in any other city or town in the U.S.?

The Stir: What kind of response has there been since this has become a national story? What has changed?

MM: From the governor's office, still lies. People have sent water filters and bottled water. We appreciate it so much, but we can't bathe in bottled water. The pipes are completely destroyed and they need to be replaced, and right now the [city and state officials] are trying to fight this off by throwing more chemicals into the water. It's just one stupid wall after another.

The Stir: What have you told your kids? How much do they know?

MM: My kids know pretty much everything. I try to keep the severity from them so they'll stay positive. But I can't lie to them when they ask why they're so sick and hurt so much. They know that people did this to us, but I try to enforce the fact that we're fighters, not victims. I would like to give them back some semblance of control and allow them to have positive outlooks for their futures.

The Stir: Did you grow up in Flint?

MM: I grew up in a tiny town in Southern Indiana. My husband and I actually grew up across the street from one another. We've been together over 20 years.

The Stir: Have you thought about leaving?

MM: Every day. I get home listings in my email every day. I look at each house and covet the homes that are on well systems. I wish we could sell our home, that I love, but it is illegal to sell your home with a known copper and lead problem. Plus, I cannot leave all of the people I am fighting with and fighting for.

The Stir: Have other families left? How have other moms reacted?

MM: Moms are terrified!! And we have such a deep-seated guilt that we handed this poison water to our children. Even though our brains tell us that we didn't do this to our children, our parent-guilt when we see our kids hurting is out of control.

So yes, families have left and abandoned their home, their American Dream, to save their families from further poisoning. They're still billing us the highest rates in the nation for lowest quality water in the nation and aren't replacing the decimated pipes poisoning us. What choice do we have?

The Stir: When you think about the entire situation, how do you feel?

MM: I feel betrayed by my state government, the Michigan Department of Environmental Quality, and every single person put into place to protect us from exactly what they did to us. I am furious that they took away our voice with the undemocratic Emergency Manager Law. I am disgusted that the governor still spends more time and money trying to put a PR spin on his involvement than actually fixing the problem he caused. But I also feel proud of the citizens who banded together and did all the protesting, marching, rallying, researching, and testing.

I'm proud of us who did the state's job to find out the truth and demand justice. I'm proud of the sacrifices my family and many others have made to help people we have never met. I hope this is an example for citizens all over the U.S. that moms and dads can stand up for their families and force change.

The Stir: What's your message to the other moms of America?

MM: My message is that this has been a mother-run movement. When you cross our babies, no. That's not going to happen. Go with your gut. Because when you think there's something wrong, that's because there probably is. And you can stand up against the government. It doesn't matter what your background is. You can make a difference and make your voice heard. No one would be doing anything now if it wasn't for a bunch of moms getting mad.

Mackenzie Dawson is a contributing editor at the New York Post. She writes about parenting, pop culture, and workplace issues.

More:
Momsflint michiganMotherhoodParentswater safety
Newsletter Sign Up
Raise the kind of person you'd like to know
Subscribe to our parenting newsletter.
Successfully Subscribed!
Realness delivered to your inbox