The tide is turning on Arctic protection. Actors that you may not have expected to play a role, are now stepping up to protect the Arctic; to embrace it as global commons, rather than exploit it. Some of the world's largest seafood and fishing companies like McDonald's,Tesco, Iglo, Young's Seafood, Icelandic Seachill, Russian Karat Group, Fiskebåt -- representing the entire Norwegian oceangoing fishing fleet, and Europe's largest processor of frozen fish, Espersen -- have now committed to stop their search for cod in the "Galapagos of the Arctic", a huge area in the northern Barents Sea and all the way up to the North Pole. This is big news which must drive governments to speed up the legal protection for the Arctic. 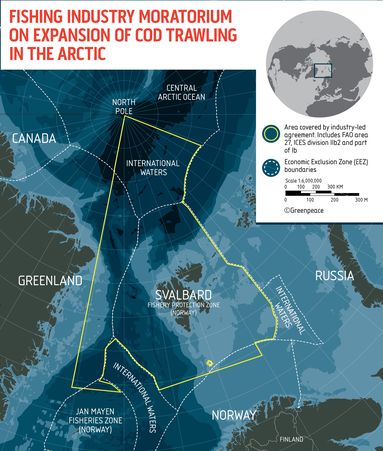 Let´s face it, in recent years, the Arctic has been in the midst of a real-world Game of Thrones. Arctic countries have rushed to stake claims of this fragile place for themselves. Corporations have exploited the tragedy of climate change -- which results in more ice-free waters in the Arctic -- to recklessly hunt for oil and fish. Non-Arctic countries have tried to get in on the game, too, not least by fixing their eyes on the "Northwest Passage" and dreaming of magical shortcuts for their commercial shipping fleets.

But, in recent years, this Game of Thrones plot has been disrupted by millions of people all over the world coming together to #SaveTheArctic as a common treasure of humanity. And now, finally, the plot twists. After many episodes in which things kept getting worse, we now see protection becoming a reality. Shell has left the Alaskan and Norwegian Arctic.

Now, worthy of a new season, for the first time ever, the seafood industry has voluntarily imposed limitations to industrial fishing in the Arctic. This means that any fishing companies expanding into unindustrialized Arctic waters will not be able to sell their cod to major seafood brands and retailers. This is not just a big step forward for the protection of the Barents Sea, this is a landmark move from a significant chunk of companies in the fishing industry, who have heard the calls of the millions of people to safeguard the ocean on top of our planet.

These voluntary measures are needed, because the Arctic Ocean, for all its beauty, lacks any significant legal agreements to protect it. Therefore, every piece of sea ice coverage lost is another piece of ocean open to reckless exploitation. Luckily, politically, too, there is change in the air.

Under the Unites Nations, for example, governments, have just started developing a new UN Ocean Agreement that could help protect two thirds of the world's oceans and set up rules to create and manage ocean sanctuaries, including in the central Arctic.

The Convention for the Protection of the Marine Environment of the North-East Atlantic (OSPAR), meanwhile, is deliberating the creation of a Marine Protected Area roughly the size of the UK in the Arctic high seas. The upcoming OSPAR meeting, 20-24 June, will be critical in delivering this vital first step to an Ocean Sanctuary. Governments who have spoken up in favor of Arctic protection, such as Germany, France, Spain, Netherlands, Sweden and Finland, need to show leadership and lead the way for the first marine protected area in the Arctic high seas.

National moves have also made headway. The United States has facilitated a moratorium on unregulated fishing in the Central Arctic Ocean among the Arctic coastal states. They are now working to bring in other nations, too. More recently the US and Canada agreed that commercial activities like shipping, fishing, and oil and gas exploitation, should be based on scientific evidence and be in line with global climate and environmental goals, as well as Indigenous rights. Of course, full Arctic protection requires action by other Arctic nations, like Russia, Denmark and Norway, who are still a bit of a stone in the shoe when it comes to Arctic protection. 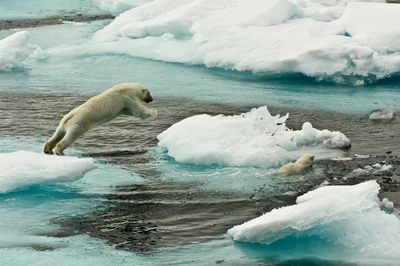 It's clear that "Winter did not come" [s1] to the Arctic this year as Arctic sea ice just hit a record low maximum in winter. With the extreme loss of sea ice, large areas of water are left open for longer periods and the need for legal protection to replace the protective ice-shield is urgent.

Science tells us that all Arctic oil should stay in the ground if we are to live up the goals of the Paris Agreement on climate change. As for fishing, there is plenty of evidence that shows that trawling the Arctic spells disaster for the sensitive seabed of the high North.

Coming back to the Barents Sea; Norway must now react to the momentum created by industries agreeing to end the exploitation of significant ocean areas. Voluntary action can only be the beginning. Norway needs to legally protect it's own most sensitive Arctic waters in the Northern Barents Sea, including Svalbard. These areas are home to a wide range of whales, as well as cold water corals and tiny creatures like the mystical sea butterfly. Doing so could make Norway deserve its own episode in "Protect the Arctic" (Anti)-Game of Thrones. Especially, if Norway delivered on their their international commitment to protect 10% of their oceans. Shamefully, right now Norway is moving in the opposite direction, allowing yet more oil to be drilled in the Arctic, and is still not on track to achieve its 10% commitment to marine protection by 2020, neither in the Arctic nor elsewhere.

Which is just another sign that, ultimately, we need a global agreement on an Arctic Sanctuary.

When we started to call for such a Sanctuary a few years ago, many called us unrealistic. But the tide is turning. As Bob Hunter, one of the founders of Greenpeace, observed: big change looks impossible when you start, and inevitable when you finish. In a few years, I trust, a day will arrive when the Arctic is safeguarded and we will no longer be thinking of a Game of Thrones, when we think about the Arctic.