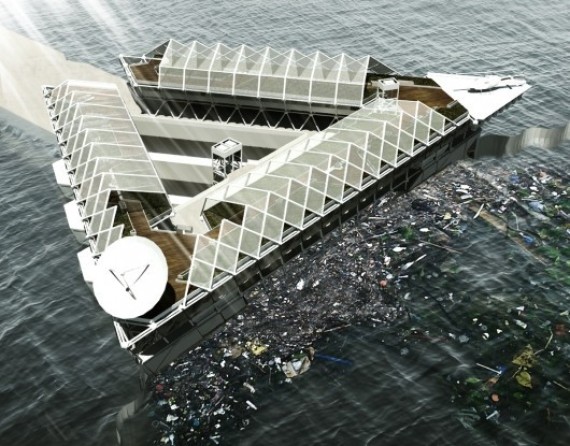 "Plastic is an extremely durable material, taking 500 years to biodegrade, yet it’s designed to be used for an average of 5 minutes, and so it’s thrown away. Few know where this mass of junk will end up … in the oceans, killing and silently destroying everything, even us.”

Cristian Ehrmantraut has developed a prototype for a floating platform that filters the ocean and absorbs plastic. Located 4 km from the coast of Easter Island, close to the center of the mega-vortex of plastic located in the South Pacific, the tetrahedral platform performs a kind of dialysis, allowing the natural environment to be recovered as well as energy and food to be produced. 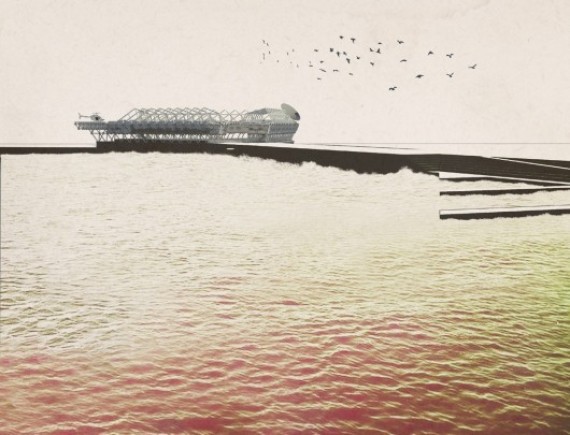 From the Architect: The idea for the project comes from a reality that, although few realize it, affects us all: the disposable culture and its principal actor — plastic

Since the 1960s, plastic has become a part of our daily lives, allowing us, among other things, to extend our lifespan. However, behind this remarkable reality lies an uncomfortable fact: plastic is an extremely durable material, taking 500 years to biodegrade, yet it’s designed to be used for an average of 5 minutes, and so it’s thrown away. Few know where this mass of junk will end up … in the oceans, killing and silently destroying everything, even us.

Today there are six mega-vortexes of floating plastic: five between the continents and a sixth close to the Arctic, which is similar in size to Brazil (8.5 million square kilometers) and is 10 meters thick. It is in this environment that Halobates – a wild insect that feeds on zooplankton – thrives. The insect has experienced such exponential growth, in fact, that it’s endangering the zooplankton, essentially eliminating the base of the oceanic food chain. 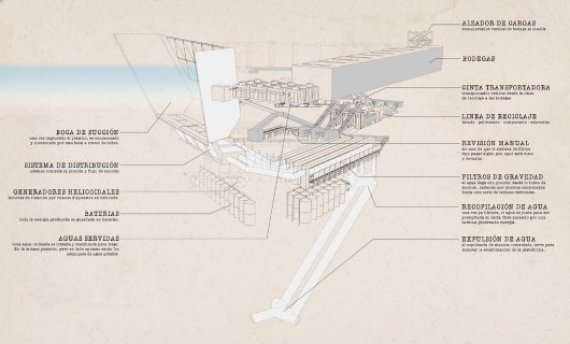 In the center of the mega-vortex of the South Pacific is Easter Island. Tons of micro-plastic trash arrive with every wave (Special Report – TVN – Plástico, el doble filo), making it a strategic place to start cleaning the global oceans. Easter Island, which hosts over 50,000 tourists annually from all over the world, could well become the world’s referent for a new ecology, which, whether we like it or not, will be focused on cleaning up this disastrous mess for the next 1000 years (see the documentary: Charting the garbage patches of the sea). This effort will enlist architecture, which will not only have to sustainably produce energy without polluting, but also actively clean the environment.

Thus, the project, which would be located 4 km off the coast of Easter island, is a prototype for a floating platform that filters the ocean, absorbs plastic, and protects the island from this ceaseless attack. 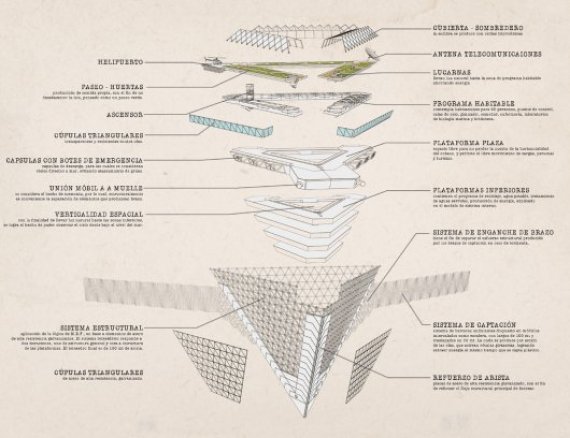 The design of the sub-structure is based on the application of the M.E.F. logic, which is similar to the Sierpinski fractal, but in three dimensions in order to achieve the overall coordination of the small, prefabricated elements. Its tetrahedral shape is simple, clean, stable, and static.

At the conceptual level, interesting things also occur, such as the verticality of the space in its natural state; just by being submerged, it’s possible to see the sky from below sea level. Aspects of emergence at a non-invasive, horizontal level were also considered, which results in a volume no bigger than a freighter, with the habitable zone on the surface and the recycling zone underwater. Ocean water is directed toward the recycling zone via gravity filters that separate the water from the plastic, which is later processed into plastic bricks, tiles, or anything that could be used to improve the quality of life of those in need. The habitable zone also has gardens to produce food for its 65 workers, without having to resort to supplies from the Island. The roof is made from photovoltaic cells. 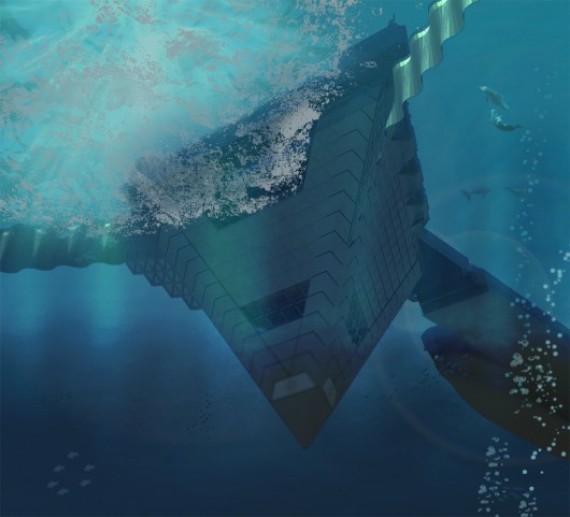 To capture the plastic and lure it to the platform, we developed a modular system of rolling barriers that use the waves to separate the living from the inert, all while producing energy and preserving the free passage of fish, boats, etc. Due to the the huge magnitude of ocean currents, a platform would be needed every several kilometers.

The ocean is dynamic, so it’s not necessary that the platforms move; eventually, all the water will pass through the same zone. A range of platforms operating systematically will cover hundreds of kilometers – a good start to fixing the disaster we’ve all collectively caused.

So let’s get to work.

This Floating Platform Could Filter the Plastic from our Polluted Oceans originally appeared on ArchDaily, the most visited architecture website on 16 Jul 2014.