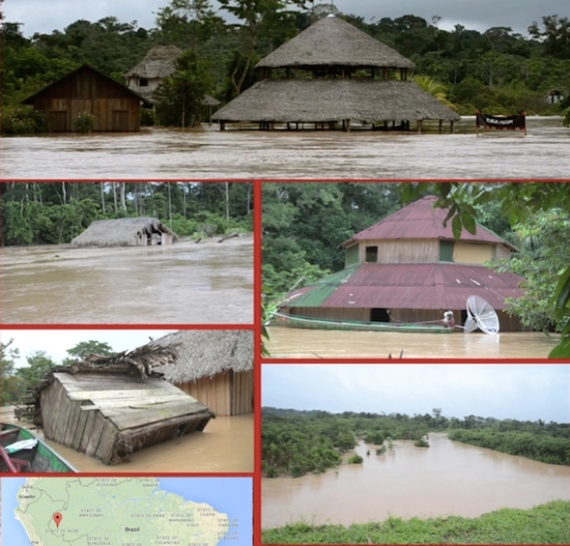 Images of the Yawanawá community, after flooding
(Photo credit: TEDGlobal)

The rain hit hard and fast, and in the dead of night. "The people woke up around midnight, and the water was everywhere. Houses were destroyed, children were crying," says Chief Tashka Yawanawá of the Yawanawá indigenous people in the Brazilian Amazon rainforest.

On November 15, a devastating flood hit Tashka's community in the Rio Gregório Indigenous Territory in the state of Acre, Brazil. The disaster took a heavy toll on all seven villages of the Yawanawá, where more than 565 people now live. Along with their homes, many families lost all their belongings, including essential items like boats, generators, well pumps, solar panels, clothing, food, and furniture. Livestock and crops were washed completely away in the deluge.

The community straddles the Gregório River, which rose to never-before-seen heights, sweeping away the villages. The people fled the rising water into higher land, in the jungle, remaining there until the waters began to recede.

"There was nothing anyone could do," says Tashka. "Because the water came so fast and strong. For three or four days, it was all under water. That was really scary. Thanks to the Creator, nobody died. But we lost almost everything we had. It makes people really sad. People are trying to find their belongings now, but it looks like the water has taken everything."

The Yawanawá plan to rebuild on higher land, but they need support. They are establishing a fund, "SOS Yawanawá," through which people can help out.

"I heard of one man who was in another village during the flooding," says Tashka. "When he came back to his house, he found nothing. Nothing was there. He could not believe it. Imagine if you returned to your home, and your home is disappeared. That man just sat down and started crying."

A Leader in the Fight Against Climate Change

Just last month, Tashka gave a TEDTalk during the opening session of one of the largest conferences in the world, TEDGlobal in Rio, which featured speakers and performers from all over the world. Of the 65 speakers, Tashka was the only indigenous person presenting. He told the audience how his community has been working hard for decades now to protect their home--the forest--from outside interests like ranching and mining, which see more value in a clear-cut forest than a living forest.

Tashka told the crowd of his dedication to working in response to climate change, a problem to which his people are particularly vulnerable--as last week's floods revealed in sharp and tragic focus.

November is the start of the rainy season in the Amazon, but last week's unprecedented amount of rain, explains Tashka now, is symptomatic of a changing climate.

"One of the shamans in our village told me that the rain looked like somebody was very angry and passed by here and destroyed everything," he says. "They did this to advise us about what's really happening with our planet."

While scientists are reticent to tie any individual disaster to climate change, they consistently warn of extreme weather--deeper droughts and unprecedented intense rains. This one certainly fits that pattern.

"We have lived in this territory for time immemorial, and this has never happened," says Tashka. "Never in our history. How we see it is that the whole climate is changing. Nature reacts differently now."

Communities like the Yawanawá are especially threatened by the impacts of climate change, as explained in a 2008 "backgrounder" paper from the United Nations Permanent Forum on Indigenous Issues: "Indigenous peoples are among the first to face the direct consequences of climate change, owing to their dependence upon, and close relationship with the environment and its resources. Climate change exacerbates the difficulties already faced by vulnerable indigenous communities, including political and economic marginalization, loss of land and resources, human rights violations, discrimination and unemployment."

In Tashka's case, the damage wrought by the flooding is particularly heartbreaking, given the fact that he dedicates his life to engaging in practices and with tools that enable his community to keep their forest home alive standing--and doing its vital work of keeping carbon locked in trees instead of in the atmosphere, a key component to global warming and climate change mitigation.

"Climate change poses threats and dangers to the survival of indigenous communities worldwide, even though indigenous peoples contribute little to greenhouse emissions," reports the UN paper. "In fact, indigenous peoples are vital to, and active in, the many ecosystems that inhabit their lands and territories, and may therefore help enhance the resilience of these ecosystems."

Tashka has been collaborating with the D.C.-based nonprofit Forest Trends on innovative ways to keep the forest standing, such as implementing economic incentives for supporting the Yawanawa's traditional forest stewardship via public and private financing. Forest Trends' Communities and Markets Program has been working with Tashka and other indigenous communities to enable them to better adapt to climate change, by supporting the communities' Life Plans and integrated territorial governance.

"I am deeply saddened by this loss, as I was there just a few months ago and saw that the community was thriving," says Beto Borges, Director of Forest Trends' Communities and Markets Program. "The Yawanawá, like other indigenous communities, are the most vulnerable to the effects of climate change such as extreme flooding. On the verge of the 20th climate change Conference of the Parties in Peru, global leaders have an obligation to acknowledge and respect the rights of indigenous and other forest-dependent communities into the negotiations.

"Indigenous peoples," he adds, "have been effective guardians of their forested territories, preventing large amounts of carbon from being released into the atmosphere through forest clearing and degradation. Yet, the important contributions of these forest guardians to climate change mitigation have resulted in surprisingly few benefits for them."

The Yawanawá are reeling, understandably. But they are also resilient, and they will rebuild their community. The same determination and focus that has made Tashka Yawanawá an effective and respected leader both within his community and internationally will aid the Yawanawá greatly as they recover.

The world should know, though, explains Tashka, that what happened last week on that terrible night in a few tiny villages in the Amazon has implications that go far beyond his community and his work. As the international climate change negotiations of the Conference of the Parties take place next week in Lima, the representatives in attendance--from all over the world--would do well to remember that fateful night of flooding.

"What has happened to Yawanawá," Tashka says, "It's just a little piece of what is really happening in the world because of climate change and global warming. A lot of people do not believe that this is really happening right now. But people like us who live with the struggle know what is happening."

Yet Tashka is hopeful. The same optimism that so impressed audiences at TEDGlobal last month is still with him: "We are doing our part, but other people must also do their part. If we all come together and do something, our little work can become bigger and bigger, and make a real difference in the world."

This report was filed by Ann Clark Espuelas.