This is the first in a three-part post about the potential for sustainable recovery along the Atlantic Coast in the aftermath of Hurricane Sandy. 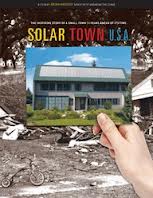 As the communities on the East Coast contemplate rebuilding after Hurricane Sandy, here is a story they might consider. I've told it before. It seems like a good time to tell it again.

In the late 1970s, a small community in Wisconsin made a big decision. The Village of Soldiers Grove decided that when people and nature come into conflict, it's sometimes better for people to get out of the way.

A little history is necessary. From its founding in 1856, the Soldiers Grove had been a river town. It was built on the banks of the Kickapoo River, a 126-mile-long tributary of the Wisconsin River in the southwestern corner of the state.

Being "river rats," as the townspeople liked to call themselves, made sense then. The river furnished mechanical power for the village's principal industry, a sawmill, and provided an easy way to transport logs cut from the forested hillsides upstream. The Kickapoo eventually provided the village with electricity, too.

But in 1907, the community's relationship with the river began to change. The Kickapoo hit Soldiers Grove with its first big flood. Forestry and farming were denuding the hills so that runoff flowed more freely into the river. More big floods slammed into the community in 1912, 1917 and 1935. Each time, the villagers cleaned up the muck, repaired the damage as best they could, and resumed their routines.

The 1935 flood persuaded Soldiers Grove and its neighboring river communities that they needed to lobby Congress to dam the Kickapoo River. But Congress, always slow, was slowed down more by World War II.

There still was no dam when in 1951, the Kickapoo surged down Main Street with such force that it sent cars tumbling side-over-side and pushed homes off their foundations, floating them away like houseboats.

In 1962, Congress finally authorized the U.S. Army Corps of Engineers to build a dam and recreational lake on the upper Kickapoo River, the largest public works project in Wisconsin history at the time. In the late 1960s, the Corps used eminent domain to buy 149 farms. Construction began in 1971.

That's when I came into the picture. I bought the village newspaper in the mid-1970s and became its editor, looking forward to a bucolic country life. That dream ended with my first assignment: a public meeting in which the Corps presented its plan for saving Soldiers Grove from more floods.

Because the village was far downriver, the dam would not offer much protection, so the Corps proposed to build a $3.5 million levee around the community. It didn't make much sense to the villagers. The levee would protect only about $1 million worth of property, including the community's business district and a few homes. If the levee were ever topped, it would keep water inside the village rather than keeping it out. To prevent that possibility, the Corps recommended several pumping stations. But the cost of maintaining the levee and pumps would double local property taxes.

As we left the meeting, the owner of one of the community's several taverns cracked: "They ought to just pick this town up and move it out of here." We laughed.

But at 3 a.m. the next morning, the idea of moving the town woke me up from a sound sleep. I got dressed, went to my office and hammered out a counter-proposal to the Corps: Let us spend the $3.5 million to move the town's flood prone buildings to higher ground. We'd never ask for federal disaster assistance again.

In 1975, after opposition to the dam grew intense and after the Corps had spent $19 million and built half of the dam, Congress withdrew its support for the Kickapoo Valley flood control project. Soldiers Grove decided to march on with the idea of relocation anyway. In the late 1970s, with innovative local financing and federal grants, the village began moving its business district to higher ground.

It was not an easy project. Soldiers Grove was an economically depressed community. Students from the University of Wisconsin helped with much of the planning. There were regrets about leaving the "river rat" tradition behind. There were frictions about who got the best lots at the new site, or whether disaster recovery funds were distributed equitably. Some people took their disaster assistance funds and left town for good. Others believed the village should remain where it was -- that there wouldn't be any more big floods.

In searching for federal help, the villagers found there was no single source of government money for relocating a community, so they became skilled grant writers and lobbyists. At one point after public attention in Washington shifted from Soldiers Grove to other more current issues, federal funding stopped, leaving the village only partly moved. But in 1978, another record flood hit the community and funding resumed.

The relocation was completed in the early 1980s. The villagers had not only accomplished one of the country's first nonstructural flood prevention projects; they also had built the nation's first solar community, requiring every new building in the cold Wisconsin climate to obtain at least 50 percent of its heating energy from the sun. Memories of the Arab oil embargoes in the 1970s were still fresh.

The community planned its new construction carefully to capture benefits well beyond flood prevention. The entire business district was built to be handicapped accessible long before the Americans With Disabilities Act became law. Students surveyed townspeople to identify retail services the village needed, so people wouldn't have to shop elsewhere. The Village Board set energy efficiency standards for new buildings, far more ambitious than required by state law. Those standards combined with solar heating meant that some of the new buildings had very small energy bills compared to the leaky buildings in the old town.

New ordinances encouraged business owners to use indigenous materials in their buildings to provide a few additional jobs for local lumber mills. Even the local Mobile gas station was a solar building.

In 1983 when the new village was largely finished, everyone turned out to dedicate it with a plaque that read:

Respectfully dedicated to all the minds who had the courage to dream, to all the hands who helped make the dream a reality, and to all the souls, some yet to come, who will nourish this idea: that people working together can make a better life.

Although we didn't know it at the time, Soldiers Grove was a pioneer in what today is called "mitigation and adaptation" in the vocabulary of global climate change. Solar energy and energy efficiency reduced the community's contribution to greenhouse gas emissions, while relocation adapted it to growing extreme weather events.

Those of us involved in the project hoped it would shift the paradigm of disaster mitigation by showing a viable alternative to the Corps' practice of deploying bulldozers to tame rivers with dams, levees, river channelization and the like. Congressional studies showed that despite billions of dollars of investment in flood control structures, deaths and property damage were increasing, often because the dams or nature didn't perform as expected.

It wasn't until 25 years later that the Kickapoo River confirmed the wisdom of relocation. In 2007 and again in 2008, all of the villages along the river were hit with the largest floods in their history -- back to back "500-year" disasters. The floods caused incredible devastation to other Kickapoo Valley villages, but Soldiers Grove remained virtually unscathed.

Does the Soldiers Grove story offer lessons for how the neighborhoods in New York, New Jersey and elsewhere on the East Coast might rebuild? Can they find a silver lining in this disaster?

I'll suggest answers to those questions later. First, there are a few more stories to tell.

Bill Becker is the Executive Director of the Presidential Climate Action Project. For more specific information about the Soldiers Grove experience and its lessons for other disaster-affected communities, see Becker's report, "Rebuilding for the Future". Photo compliments of Koss Films.