Google has just released a video and story about plans for a new "futuristic" headquarters at their Mountain View, California location. As described in an article in the Guardian, Googlers can look forward to "woodland glades and wildflower meadows, next to trickling streams and verdant allotments, among bike paths and yoga classes and gushing fountains, with fresh produce on tap. It will be a pastoral utopia-with-WiFi, all safely swept beneath a series of gigantic glass tents."

A key to the architectural concept is "flexibility." David Radcliffe, Google's vice-president for real estate says:

The idea here is simple. Instead of constructing immoveable concrete buildings, we'll create lightweight block-like structures which can be moved around easily as we invest in new product areas.

This may be a good idea for more reasons than he thinks. The map below, taken from Pacific Institute research, shows the current and future vulnerability of Google's Mountain View headquarters to sea-level rise from human-induced climate change. Their property at the south end of San Francisco Bay is extremely vulnerable to projected sea-level rise. Indeed, forecasts over the next several decades show Google's property to be smack in the area vulnerable to flooding with a 1.4 meter sea-level rise. Even smaller increases will boost the risk of flooding during storm events and high tides. New York recently learned a hard lesson when Hurricane Sandy struck at high tide, made worse by an increase in sea-level of 20 centimeters (nearly 8 inches) over the past several decades. Lloyd's of London (pdf) estimated that this rise in sea level contributed to an increase in billions of dollars of damages from storm surges. 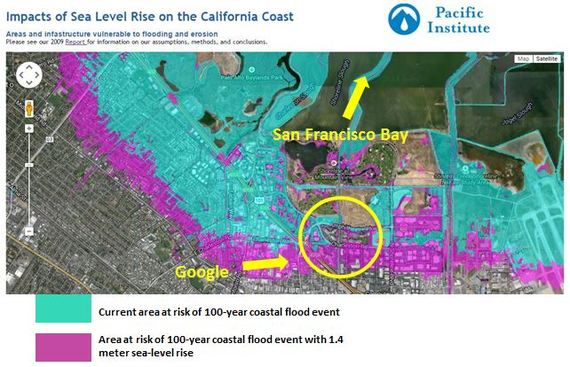 The Pacific Institute study on the risks of sea-level rise for California identified $100 billion in existing infrastructure and nearly 500,000 people living in areas at risk from projected sea-level rise. Without planning, these numbers will grow. 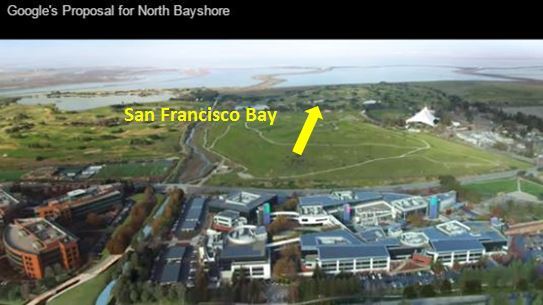 Google is a forward-looking company. But are they looking forward to, and planning for, the now-unavoidable impacts of climate change as they design new multi-billion dollar infrastructure investments? Are the rest of us?

Because more and more climate impacts are coming, ready or not.