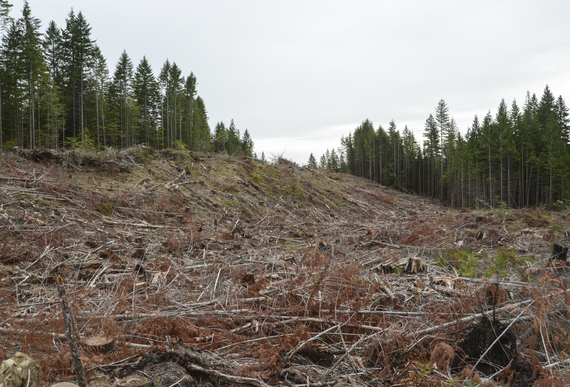 For decades, crews of illegal loggers have traveled deep into Peru's Amazon rainforest, cutting valuable hardwoods for sale on the international market while threatening indigenous communities, our environment, and the climate. Rampant corruption has plagued Peru's forest sector, allowing timber mafias to use fraudulent documents in order to obtain permits that they use to illegally harvest timber. According to a study by the World Bank, up to 80 percent of the timber exported from Peru has illegal origins. A new documentary from Al Jazeera shows just how widespread illegal logging is in Peru and how that illegal wood is making its way to the United States.

With illegal logging and associated trade as pervasive as it is, you may be surprised to learn that the United States has a trade agreement with Peru, passed in 2007, that includes a detailed set of binding obligations to curb illegal logging and associated trade. As we've previously discussed, these obligations have failed to stem the problem. And as the new Al Jazeera documentary makes evident, the failure to enforce violations of the U.S.-Peru free trade trade pact in its early years has allowed bad actors to continue to operate and enabled illegal wood to enter the U.S. market. The result? American businesses have been undercut by the entry of cheap illegal products into our market, and American consumers have financed illicit trade by unknowingly purchasing timber illegally harvested from Peru's Amazon rainforest.

Here is some background. In 2012, the Environmental Investigation Agency (EIA) published a multi-year investigative report which documented that at least 112 illegal shipments of cedar and mahogany wood -- laundered with fabricated papers and approved by the Peruvian government -- arrived in the U.S. between 2008 and 2010. EIA identified Oroza Wood SAC as one of the entities supplying illegally taken timber to Maderera Bozovich SAC, which would then export the illegal timber to the U.S.

Using rules in the U.S.-Peru free trade pact, EIA and the Center for International Environmental Law petitioned the U.S. Trade Representative (USTR) to take action under the trade pact and verify the legal origin of shipments from two companies, including Maderera Bozovich SAC, because of their history of exporting significant volumes of timber to the U.S. from logging concessions with illegal activity. But USTR never did so, and the illegal activity continued.

Over the past two years, Peru's customs and forest management agencies have conducted investigations to check the legality of timber exports. As a part of the latest investigation, as Al Jazeera documented, Peruvian officials found that several shipments from a company called La Oroza had falsified documents, claiming that the wood was legally cut on land belonging to an indigenous community when instead it had been illegally taken elsewhere. This is particularly significant because La Oroza is owned by the same proprietors as Oroza Wood SAC, which EIA identified in 2012 as a supplier of illegally harvested timber to Maderera Bozovich SAC. Because USTR and Peruvian officials failed to investigate the well-documented violations back in 2012, the owners of Oroza Wood were able to continue operating, under a slightly different company name, illegally.

Al Jazeera then followed the illegal shipments of timber from La Oroza to the United States. The main American importer of La Oroza's wood is a company called Global Plywood and Lumber which is registered in Nevada (a state notorious for its lack of corporate ownership transparency, as EIA explains) and operates in Poway, California from the backroom of a volleyball training facility. No one has yet to trace where the wood from Global Plywood has gone, but it could be anywhere--including your floor.

The lack of enforcement of the U.S.-Peru free trade agreement has allowed the illegal timber trade to flourish and has put our environment, climate, businesses and consumer rights at risk. And now the United States is negotiating a new free trade deal, the Trans-Pacific Partnership (TPP), that includes the U.S., Peru, and ten other countries. The fact that Peru is ignoring its existing obligations gives us little reason to believe it will make good on any environmental rules that may be included in the TPP's environment chapter. Therefore, if the TPP concludes, Congress should withhold its vote on the agreement until Peru has addressed these past violations and until it has come into compliance with its new obligations in the TPP.

Luckily, the trade pact isn't the only tool to combat illegal logging and associated trade. Timber harvested illegally in Peru and shipped to the U.S. represents a violation of the Lacey Act, which requires companies to take due care in ensuring their wood products are sourced legally. Violators of the Lacey Act can face fines or jail time. But a law is only as effective as its enforcement, so please help by telling the Obama administration to crack down on companies that knowingly import illegal wood products and to fully enforce the Lacey Act.

This post originally ran on the Sierra Club's blog, Lay of the Land.