Years ago I did artwork for The New Yorker and would sit myself on the corner or anywhere in New York City and draw. I've done that in Europe, Africa and Asia as well. Last week I packed up my paints and headed to Florence and as I drew and painted the city and countryside from various vantage points it reminded me of that young girl with her many sketchbooks painting her way through Europe.

It may seem like somewhat of an oxymoron to consider Florence as anywhere near "off the beaten path," but in a city overflowing with art and history, there are always under-appreciated works to be seen and enjoyed. Having visited this Mecca for art-lovers several times in the past, I returned for another look -- you can never take in Michelangelo's David or wander through the Uffizi too many times, but other, less-visited sites are worthy of one's artistic admiration. 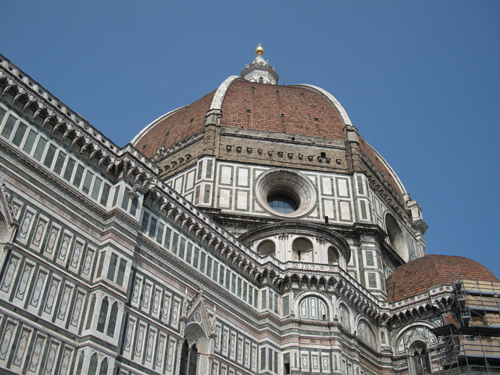 As a painter, I particularly enjoyed seeing the unfinished paintings of Leonardo DaVinci and Raphael because it showed the process of creating these monumental works of art. Many of the artworks were old friends from my art history degree days at Williams College and classes at Harvard, rounding that out was an internship at the Metropolitan Museum. My travel companion did not share my background, making the trip even more enjoyable as seeing these masterpieces through fresh eyes added a new dimension in addition to thoughtful insights.

In the Uffizi, at the Museum of San Marco and Pitti Palace, I found three exceptional works -- all unfinished altar pieces. Works by da Vinci, Raphael, Fra Bartolomeo are exhibited in different stages of completion -- a rare gift from the artists that offer the modern student an idea of how the masters approached their work.

While walking the Oltrarno (and looking for painting ideas), I happened upon a most interesting museum; not due to the works exhibited, but rather because of the history behind the museum itself. The Museo Casa Rodolfo Siviero, the private collection and home of Rodolfo Siviero who became known as the "007 of Art Repatriation". The reason people flock to Florence is largely due to the singular collection of art gathered and exhibited there. This museum reminds the art lover of the work required to reclaim lost and stolen masterpieces following World War II. Having studied under Lane Faison, who was also involved in this great work, I felt a sense of kinship for those who recognized the importance of understanding and preserving what has been handed down to us.

When you visit the church of Santa Croce (which you must...), they offer a ticket to the Casa Buonarrotti. It was purchased by the artist Michelangelo, was left to the artist's nephew, Leonardo and transformed into a museum by Leonardo's son Michelangelo (named after his famous uncle). Given everything else the city has to offer, you might be tempted to skip this. Don't. The exhibit of drawings by Michelangelo and Leonardo DaVinci, shown side-by-side, is a treasure trove for casual art lovers and serious students alike. This exhibit provides a preview of a major show opening in October at the Musei Capitolini in Rome. I highly recommend putting this one in ink on your agenda.

On the way out, the Strozzi Palace offered a fascinating look at an interactive contemporary work in the courtyard. What looked like saran wrap (but which later turned out to be a bit sturdier) was stretched between the columns in the sort of shapes you might get from complex mathematical formulations. I was quite surprised when people began to climb in them, and was impressed by the structural integrity of the clear wrap (after I moved out from underneath in case they fell through). All is not old, nor is it "hands-off" in Florence.

Our flight home connected through Amsterdam and in the middle of the busy airport was a small satellite of the Rijksmuseum called the Rijksmuseum Schiphol (the innovators of the airport gallery). There was an excellent exhibit titled Dutch Flowers of paintings from the 17th century, I particularly enjoyed the painting by Rachel Ruysch and some of the titles were amusing such as Jacob Marre's "Still Life with Vase of Flowers and Dead Frog". What a great idea and welcome break from duty free -certainly on the beaten path, but a refreshing diversion from the rigors of travel. 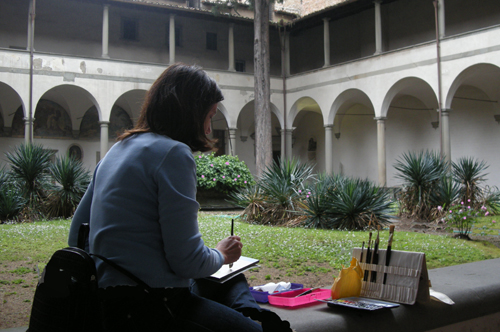