A nurse shark at the Birmingham National Sea Life Center in England appears to have become the world's first vegetarian shark after developing a palate for heads of lettuce and other veggies, TreeHugger reports.

Florence, a 6-foot nurse shark, made headlines in 2009 after undergoing a risky out-of-water surgery procedure to remove a rusty hook from her jaw. It was only the second time the operation had been performed on a shark, according to the BBC.

Florence recovered from the surgery and was put on exhibit at Birmingham Sea Life Center, but was never quite the same: Handlers reported that she started avoiding meat and has now gone "completely veggie."

Graham Burrows, a curator of the Sea Life Center, said in a press release that caretakers have had to find creative ways of getting Florence proteins and other nutrients missing from her preferred diet.

"We're having to hide pieces of fish inside celery sticks, hollowed out cucumbers and between the leaves of lettuces to get her to eat them," Burrows said. "And it has to be well hidden, because if she realizes it's there she'll ignore the offering and wait for the strictly vegetarian option."

Burrows said Florence's diet isn't entirely unique -- nurse sharks in the wild have been known to eat a little algae here and there.

“We just weren’t expecting her to go completely veggie. We wouldn’t want her to be an embarrassment to the other flesh-eating hammerheads and black-tipped reef sharks in the ocean tank," Burrows said.

Florence isn't the first case of a carnivore refusing to eat meat. During the 1950s, a couple running a farm in Washington state published a book about Little Tyke, a lion who refused to eat meat from the time she was born.

In the book, George and Margaret Westbeau wrote that Little Tyke was born in a zoo to a mother taken from the wild. The mother killed each of her cubs as soon as they were born, but George, a zookeeper, was able to save one "poor little tike."

When Little Tyke refused to eat meat, George and Margaret Westbeau adopted her and raised her on a diet of grains, milk and raw eggs.

Check out pictures of Florence, below: 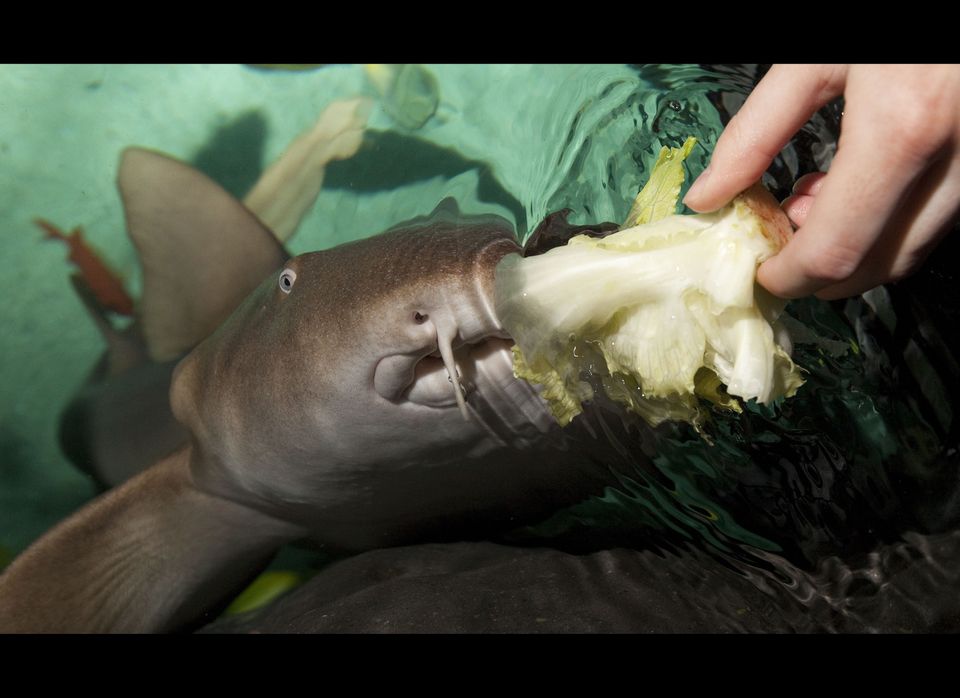 1 / 6
Florence the Vegetarian Shark
The first shark anywhere in the world to survive a surgical procedure 'out of water' Florence may now lay claim to the title 'world's first vegetarian shark.'
National Sea Life Centre