Officials in south Florida were in for a surprise last week when they cut open the belly of a 16-foot Burmese python they had captured and killed in the Everglades.

Inside the reptile they found a 76-pound, fully intact deer, the Sun-Sentinel reports.

According to the South Florida Water Management District, the snake, which was a female, weighed 215.4 pounds with the deer, and 139.1 pounds without it. The girth of the snake's stomach, stretched to accommodate the carcass, measured a whopping 44.1-inches. From head to tail, the reptile measured 15.65 feet.

CBS Miami reports it's one of the largest reptiles ever found in South Florida.

The Sun-Sentinel spoke to Skip Snow, a biologist and python specialist at Everglades National Park, who explained how the snake may have killed the deer:

The python, an ambush predator, had staked out a known deer trail, he said. When the deer walked by, the snake presumably seized the animal in its sharp, backward-pointing teeth, crushed the deer under its weight and coiled around it, killing the deer before consuming it, he said.

Officials from the Florida Fish and Wildlife Commission used a shotgun to kill the snake in an effort to prevent the species from spreading north, according to LiveScience.

Burmese pythons are native to Southeast Asia but are popular pets in the United States. According to the University of Florida, a 20-inch Burmese python can become eight feet within a year of captivity. This rapid growth leads inexperienced pet-owners to release the snakes into the wild when they become too big for their containers, where they reproduce and threaten the fragile ecosystem.

Between 2006 and 2007, 418 Burmese pythons were found dead or killed in Everglades National Park, reports the University of Florida.

In July, Jaren Hare and Charles "Jason" Darnell, a Florida couple, were found guilty in the death of Hare's 2-year-old daughter, Shaianna. The toddler was strangled in 2009 by a pet Burmese python that had escaped from its aquarium. 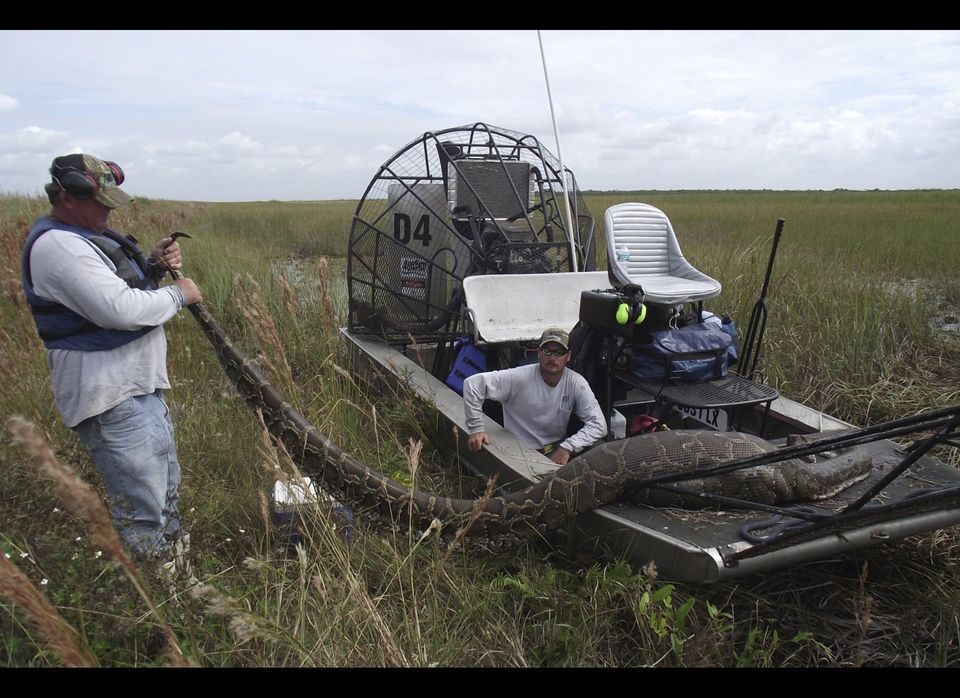