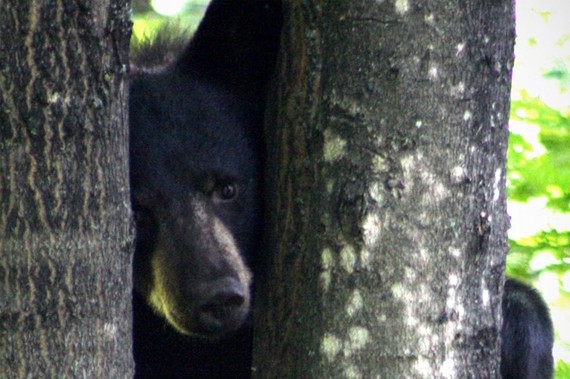 For the first time in twenty years, and against huge opposition the Florida black bear hunt went ahead. The slaughter started on Saturday, October 24th and was set to continue for seven days, but was closed after the first weekend as the "kill" quota (320) was nearly reached. The permits allowed anyone to hunt, and there was no limit to the amount of permits sold. One of the first bears to be shot and killed was a lactating mother and two bear cubs. Provisions in the laws stated that only bears over 100lbs would be permitted to be killed and no cubs. I doubt very much there will be any consequences for the person who shot the bear cubs. One can hardly mistake the cubs that were killed for a 100lb bear. They did not however belong to the dead mother bear, so presumably those cubs will be left to die of starvation as will any other cubs whose mothers were shot. Close to 3,000 permits were sold including apparently one to Ted Nugent who was his usual posturing self, but as yet there are no reports of a Nugent sighting at the hunt. 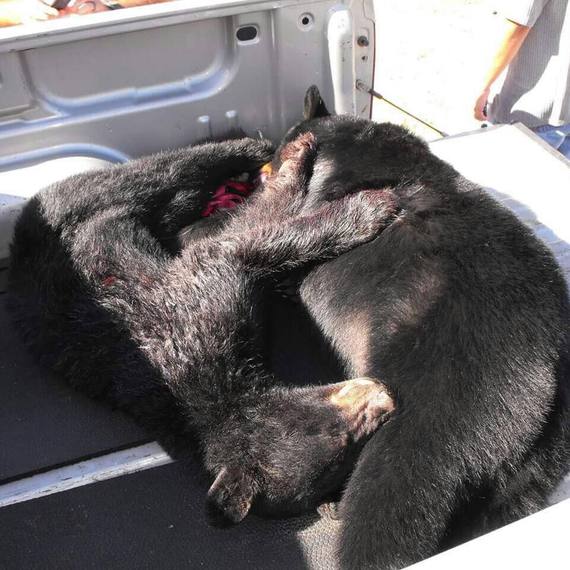 Major efforts were launched by multiple animal rights groups before the hunt was rubber stamped by Florida Fish and Wildlife including opposition at a commissioners meeting, which took place on September 2nd. A local group, Animal Hero Kids, did various actions trying to bring attention to this issue by hanging a banner at the meeting location and projecting anti-hunt images at an event the Governor was attending as well as state wide protests organized by another local coalition, Stop The Hunt, all to no avail. The powerful pro-hunting lobby won again against common sense, science, and public opinion.

Have we learned nothing? According to scientists, we are facing the sixth mass extinction, and we are losing animals in unprecedented numbers. The recent killing of well-known celebrity lion Cecil caught the world's attention and set the internet alight with outrage. His killer, a dentist from Minnesota, called Walter Palmer, even in the face of a new interview ascertaining that the hunt was entirely illegal, and Cecil was indeed the target, has not faced any charges.

In another incident amongst countless, the Yellowstone Parks services took it upon themselves to kill a mother bear after she attacked and killed a hiker who was walking alone without protection and came upon her and her two cubs. Again, the murder of Blaze was done amidst massive protest from the public, activists and bear behavior experts alike, and yet again, officials chose to ignore all of these protestations. Her cubs were subsequently shipped to zoos to face a lifetime of incarceration, boredom, and frustration (see my previous post about Blaze).

The owner of a gourmet sandwich chain, Jimmy John Liatuad shot and killed an endangered female black rhino after paying $350,000 in a lottery! How is this allowed to happen? How is it that the hunting lobby, elitist, wealthy and mainly predominantly white males are allowed to continue hunting our wildlife to extinction? Why do we have this attitude that wildlife is ours to auction off for a thrill kill and why does it appear our wildlife protection agencies have a culling policy instead of a protection policy and seemingly refuse to listen to scientific expertise? How on earth does anyone believe killing one of an endangered species is a conservation effort? And the money that is paid for these hunts? Is anyone tracking that it ends up paying for conservation efforts and not in a government official's bank account?

The list of attacks on our wildlife goes on. Six conservation groups are fighting to save the rare black wolf in Alaska as they are perilously close to extinction thanks to hunting and habitat loss. They even had to sue the U.S Fish and Wildlife Services to force them to make a decision on putting the wolves on the endangered species list to protect them!

The Florida bear hunt was a bloodbath. A mass killing of innocent bears and nothing less unopposed by a Governor, who has come under attack previously for his dubious leadership. Some media have reported the bears as being "nuisances" and indeed, this hunt was created to cut the population of bears down so that they would not be discovered rummaging through people's trash and terrorizing the neighborhood dogs. It is contemptible to kill animals because we human beings can't figure out a bear safe trash bin. Educating humans and providing bear safe containers for trash was offered as the real solution but was ignored.

One of the main food sources for the black bear in Florida is the Saw Palmetto Berry. Because of the demand for a natural remedy for a host of ailments, illegal harvesting became such a problem in Southwest Florida the state stopped issuing permits for collection on public lands. However, people were still cutting fences to drive into state reserves to harvest the berries illegally. This, of course, creates a huge issue for hungry bears looking for an alternative food source, and where else are they to go but to easily obtained garbage cans in suburbs close to their habitat. Instead of coming down hard on this issue, again the Fish and Wildlife Services, whose main job should be protecting wildlife, issued hunting permits. Enacting laws that would protect the bears habitat and food source should have been the priority.

A sea change needs to happen in the mindset of people when it comes to wildlife management. We must all keep up the pressure to change the kill, kill, kill attitude and start protecting animals habitat and lives. We can no longer allow trophy hunting or the wholesale slaughter of animals such as happened in Florida against the black bears. Enough already.