A Florida couple arrested for DUI has aroused attention for what they allegedly did while in a police car waiting to go to jail.

On Friday night, Nassau County Sheriff’s Deputy Mark Hunter pulled over two bicyclists who were riding around without their lights on and had almost been hit by a vehicle,

The officer said both suspects, later identified as 35-year-old Megan Mondanaro and 31-year-old Aaron Thomas, smelled of alcohol and had bloodshot, watery eyes and slurred speech, according to FirstCoastNews.

Hunter said that after Thomas failed some field sobriety tests and declined to do others, he was arrested. Mondanaro was also taken into custody after she declined to take the tests.

Although both were then handcuffed in the back of Hunter’s police car, they apparently didn’t let that minor detail stop them from appreciating the romance of the moment.

According to the police report obtained by The Smoking Gun, Hunter was outside of the car when both Thomas and Mondanaro “took their clothes off and started to have sex.”

The officer said that when he “opened up the door to stop them,” Thomas “was naked and [Mondanaro] had her pants down where her vaginal area was visible. I also observed her bra was halfway off and her breasts were fully visible.”

After Hunter removed a naked Thomas from the car, he knocked the deputy to the ground and ran away before being arrested at a Cold Stone Creamery, according to Jacksonville station WJAX-TV.

Meanwhile, Mondanaro allegedly “became violent and starting kicking at” another deputy. She was forced to the ground and suffered abrasions on her face, according to The Smoking Gun.

Mondanaro has been charged with DUI, exposing sex organs, committing an unnatural and lascivious act and resisting without violence, according to FirstCoastNews.

Thomas was charged with a threat against a public official, committing an unnatural and lascivious act, exposing sex organs and DUI.

Mondanaro remains behind bars in lieu of a $12,508 bond. Thomas is being held without bail.

Both Thomas and Mondanaro have lengthy rap sheets, according to the New York Post. Mondanaro recently served 60 days in jail for a parole violation and Thomas served 46 days behind bars for assaulting a law enforcement officer. 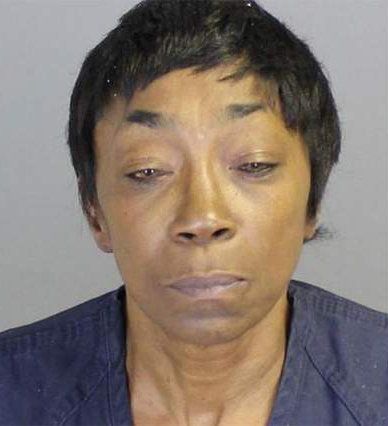