No, seriously. There's no way any sane golfer would approach this alligator, who laid claim last week to the seventh hole at Myakka Pines Golf Club in Englewood, Florida.

The alligator made its first move last Friday, casually strolling onto the green to the surprise of onlookers, who snapped a couple pictures. Course management posted the photos on Facebook, telling readers the gator was simply trudging "from one pond to another."

"Our club has been in existence for 37 years and we have never had a problem with the gators," Myakka's general manager, Mickie Zada, told The Huffington Post on Wednesday. "There are probably hundreds of gators on [the club's] 27 holes of golf." 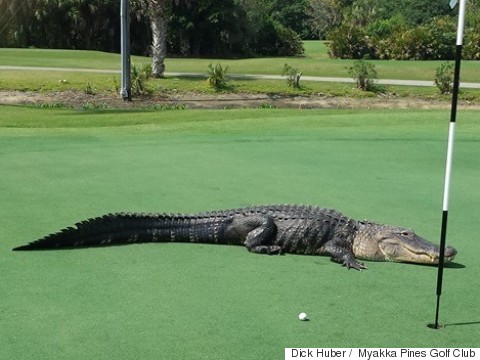 Zada said they used to have a 15- or 16-foot alligator nicknamed "Big George" make frequent appearances on the course. This latest guest, which Zada estimated at 12-13 feet long, has yet to earn a moniker -- though in a nod to its new online celebrity status, Zada joked it should be called "Viral." 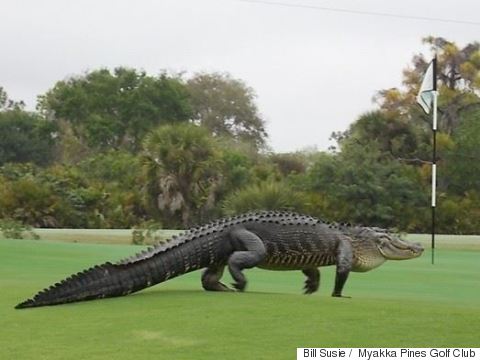 Zada told HuffPost the golf course is miles from the nearest house and is proud to host all manner of wildlife. An Audubon study this year counted 157 species of birds who call the course home.

"Lots of people think the pic is photo shopped," club staff wrote on Facebook "Nope! We just grown 'em big in these parts!"