The Republican Party of Florida is sending out a new mailer that accuses Barack Obama of being "dangerously unprepared" and "no friend of Israel."

The direct mail piece, which was passed on to the Huffington Post by a reader, pairs two noxious quotes from Iranian President Mahmoud Ahmadinejad along with some (very brief) quotes from Obama on Hamas, Hezbollah and his willingness to hold talks with the leaders of rogue nations. (The mailer's graphic layout also seems to place Obama's head as literally springing from the region of the troubled Middle East.) In a section slugged "The World On Obama," the mailer quotes four different op-eds from conservative outlets that are critical of Obama -- including the Wall Street Journal, a FoxNews.com blog, The Jerusalem Post and the New York Post.

But one of the editorials, in particular, is selectively quoted to the point of distortion in the mailer -- specifically the line that Obama believes Hamas and Hezbollah have "legitimate claims." Those two words come from a David Brooks New York Times op-ed from May 2008. With respect to the violent tactics employed by Hezbollah and Hamas, Obama told Brooks that "they're going down a blind alley with violence that weakens their legitimate claims." Only the last two words of that line are quoted in the Florida GOP's mailer. Elsewhere in the same piece, Brooks wrote: "Right off the bat he [Obama] reaffirmed that Hezbollah is 'not a legitimate political party.'"

Of course, one doesn't have to perform a close-read of a David Brooks column in order to discover Obama's position on Israel and its security. The Democratic nominee has repeatedly made clear that his support for Israel is "nonnegotiable," winning raves from pro-Israeli attendees of this year's AIPAC conference. 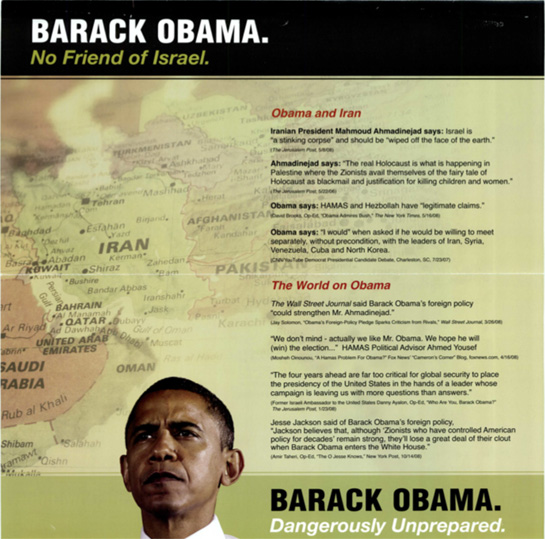 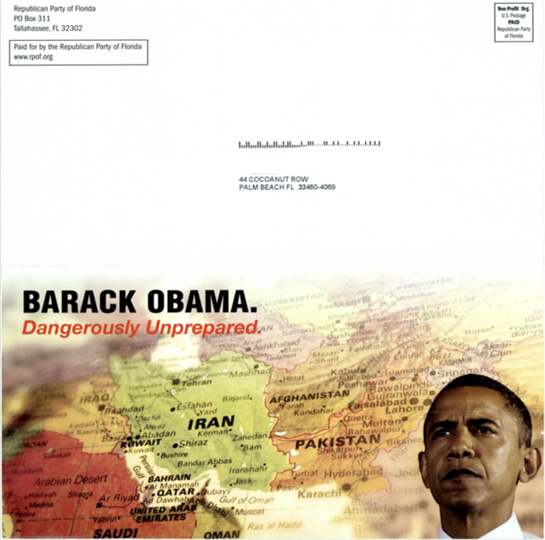