It was a cool blustery morning at Albert Whitted Park in St. Petersburg. It had taken us well over an hour to travel there through the frustrating traffic of Tampa and across the bay to Pinellas County.

I could hear the traffic -- sirens, tires screeching and the occasional horns of impatient drivers. It was one of those drives that made me glad that I am resigned to be a passenger for the foreseeable future.

I lost my eyesight only days after we arrived in the Tampa Bay area in June of 2007 while still in my early 40s, and the Howard Frankland Bridge is one of the few sights I remember of Tampa Bay before the lights went out.

My husband Gary (he amusingly calls himself my seeing-eye husband) parked the car and led me out to the stage area. I couldn't see the look of excitement on people's faces, but I could feel it in the air, swaying with the music over the sound system.

Someone placed a sign in my hand. I knew what it said without even asking -- Charlie Crist for Governor in 2014.

I never had the chance to see what the former governor looks like, although I may have seen him on the news while we still lived in Cincinnati. I've heard that he is handsome and I've been told his tan looks far more natural than the orange-toned skin of our congressman in Cincinnati, John Boehner, whom I met in 2005 when I could still see.

One might say that my blindness allows me to judge people not by their looks but the content of their character, and I consider that an advantage. Dr. Martin Luther King alluded to that ability as a way to measure a person, and I truly believe that.

When the program began, I heard the familiar voice of Congresswoman Kathy Castor, followed by a heartfelt speech by former Attorney General Bob Butterworth, whom Gary had praised for his efforts with the tobacco settlement in the 1990's.

He was followed by Rick Kriseman, whom I had met just minutes before the rally began. His firm handshake and pleasant, yet authoritative voice gave me a picture of a confident and intelligent man, so I was pleased when he won the St. Petersburg mayor's race the following day.

Kriseman was followed by Watson Haynes, a close friend of Crist and his family, who worked the crowd into exuberant anticipation.

But above the din of the crowd, I could hear a singular heartbeat. I knew that I was hearing the sound of Charlie as he waited to address the crowd.

This was not the first time that I'd met the former governor. Gary had taken me to the opening of his campaign office when he ran for the U.S. Senate in 2010. He confused me at that time. Gary had told me that he was a moderate Republican, a vanishing breed. But I did not understand why he would leave his party and become an Independent -- until I heard him speak.

My blindness allows me to better hear a political speech. It allows me to listen far more intently than I ever could before. It also allows me to have a sixth sense to compensate for my lost sight. I can feel what is behind the words. I could tell that while he would support a party's platform, he would not be controlled by it.

I have looked at others who have changed parties. Some, like Joe Lieberman and Arlen Specter, were blatantly opportunistic.

But Crist's reasons felt more like Arianna Huffington, who felt a change in party should be based on intelligent, self-confident and independent thought. Too often parties try to manipulate candidates. I could feel that Crist had had enough of the GOP's policy shifting, and he wanted to stand on his own ideals. 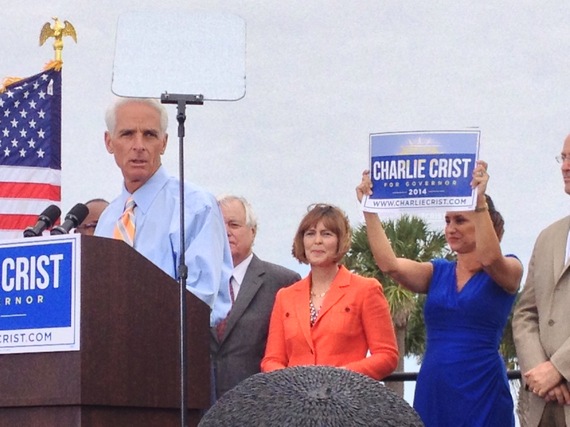 His speech did not disappoint me. This was a matured, seasoned candidate, ready to set things right.

I don't want a perfect person in Tallahassee. I don't think one exists. I want someone mature enough to know what to do and the courage to ignore party politics if he must.

That takes the confidence that I felt when Charlie Crist announced that he was ready to take back the Governor's mansion, not for his own sake, but for the sake of the people and land of Florida.

I couldn't see it, but I could feel it.