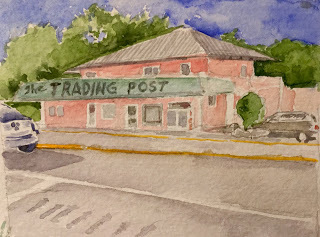 Key comes from the Spanish word "cayo," and it means reef or low island. There are l700 hundred of them in the Florida Keys. Among the largest are Key Largo, Key West (also known as the Conch Republic, which threatened secession in l982, "we secede where other people fail"), Plantation, Lower Matecumbe, Upper Matecumbe, and Sugarloaf. Driving down Route 1 from Miami, along the Everglades National Park, you know you're in the Keys when you start to see signs advertising "Bait." Islamorada, the village that comprises Upper Matecumbe, Lower Matecumbe, Windley and Plantation Keys is known for its fishing while Key Largo attracts the divers. Passing the town of Tavernier you come to an establishment called the Ocean View bar, which has retained its name though due to a hurricane it was swept across the highway and now faces a golf course. Many of the homes you see are on stilts since it's the only way they can be insured. There's a subtropical refulgence mixed in with an air on indulgence. Asian massage parlors and in the age of cybersex one of the last XXX theaters in the United States are scattered amidst dilapidated shopping malls and million dollar houses which come with their own landing strips. A strip club is the neighbor of a Sotheby's Realty franchise. Facing The Ceeca Lodge, the sprawling resort in Upper Matecumbe, is a 24 hour store called The Trading Post, outside of which is the display for a plot of artificial turf with the picture of a boy and his dog and the question "Has you grass EVER looked THIS good? followed by the misspelled "ask inside for detals."