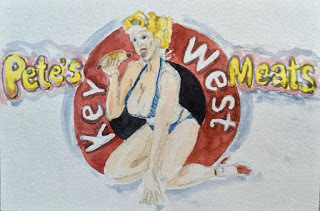 Remember Mel Fisher who discovered the Nuestra Senora de Atocha, the treasure laden Spanish vessel which sank in 1622. If you're in Key West you can go to the Mel Fisher Maritime Museum or purchase some coins and artifacts from sunken vessels that are for sale in his shop on Duval Street. Mel Fisher is only one of a long line of treasure hunters who have come to Key West. Searching for sunken boats or "wrecking" as it's called was one of the industries producing the revenues that built Mallory Square and other major pieces of Key West real estate. Only a few steps down from Mel Fisher Treasures, you'll find the banjo player in the Darth Vader costume along with the artist David Linehan who has tattooed his van with sharpies. Be sure not to miss a desolate bar where anything goes called the Garden of Eden which on a recent night sported a totally empty dance floor or a hot dog stand called Pete's Meats whose logo features a girl in a cheesecake pose together with the soubriquet "You'll love Pete's Meat in your mouth!" Then there's the boutique called French Kiss. You always think you're arriving at the wrong time when you walk into places like these. Duval Street is filled with aging hipsters supporting Key West's open cup policy (which means you can carry your drink in your hand as you walk down the street) and who sport hanging front porches in addition to the long hair, tattoos and piercing. Many of the them have the bombed out look of the character of Oswald in Ibsen's Ghosts, who got syphilis from his father. If you keep walking and take a left on Truman Avenue you will come to Better Than Sex, which is billed as "a dessert restaurant (featuring such specialties as "two naked balls of sorbet") and whose blackened windows give it the look of an adult video store. And if you're still unsatisfied, the lap dancing establishment Bare Assets is further down. Most cabs everywhere else are yellow, but in Key West they also have a fleet that's painted pink which will take you to Sloppy Joe's the bar where Hemingway hung out and in which his gun is still on display. You see pictures of Hemingway everywhere, including right in the entranceway of Old Town Fitness on Truman where the members of the 1200 Club (those who have lifted 1200 pounds and above) are listed by the front door.