Florida's legislators get a $22,000 annual health benefit paid by the state and 165 out of 180 of them accept the benefit.

Meanwhile, Florida's poorest and most vulnerable residents aren't being covered by Obamacare today and wait for answers, and insurance coverage.

Nearly 1,000,000 Floridians who'd benefit from expanding Medicare coverage, instead are reduced to petitioning the deaf ears of a legislative body whose health-care premiums cost a ridiculous 13 percent of the typical insurance premium residents in state pay for coverage.

"Rejection of the plan by House Republican leadership is part of a dangerous trend: Florida politics, at least in the House, are becoming nationalized." said Rodriguez, he added:

"That is not a good thing."

That same legislature objects to a program where the Federal government pays all of the costs of Medicare expansion for 3 years, and 90 percent of the costs afterwards. 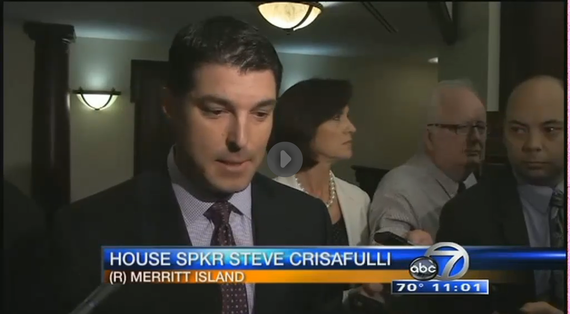 I guess an 87 percent subsidy is good for the Florida Legislature, but 90 percent is too good for Florida residents.

Most of the legislators who decline the state's Cadillac health plan coverage, are already covered by the VA.

A small minority declined for actual, moral or political reasons.

"Four House Republicans voted with all of the Democrats for the Florida Senate's bipartisan Medicaid expansion bill on Friday but it wasn't enough," continued Rep. Rodriguez which he contends will, "hurt hundreds of thousands of uninsured in the so-called coverage gap, and local taxpayers who will be on the hook."

Florida's Governor aka "Corporate Felon in Chief" Rick Scott pays a paltry $30 a month for a family group health plan under the state's Senior Management and Select Exemptive Service plan.

Rick Scott is a billionaire.

Florida is our nation's third largest state, and it's state Senate, House and Governor's office are all in the hands of one party: the Republicans.

The Florida legislature has one task, enshrined in the state constitution that stands above all others: create and ratify a budget by June 30th of each year.

Normally, the part-time legislature only meets once a year.

However, this year Florida House Republicans refused to complete any budget that might give healthcare to the poor and needy.

Their important work was left undone, so the Florida Legislature had to schedule a second "special" session for this June to keep kicking the can around.

The main topic of disagreement? Florida's Senate (also Republican controlled) wants to accept Obamacare's expansion of Medicare. Florida's House, and now Governor too want to reject expansion - even though it means leaving sick people to die, losing hundreds of millions in Federal dollars that residents already pay in taxes.

Slick Rick Scott even decided to play games with Obamacare by swearing on his dead mother's grave that Medicare expansion was morally right in 2013, shortly after her death.

Now we find out that that, was all just a sick political game to the former CEO of Columbia-HCA Hospitals, seeking a few points in the polls ahead of an election year.

Republicans are quick to point out when someone is "flip flopping" on an issue - which normal people call changing their conclusions to fit the facts.

I guess Republicans only get upset when it's not one of their own flipping the bird at the poor and flopping their mouths instead of making sure those less fortunate have decent health care.