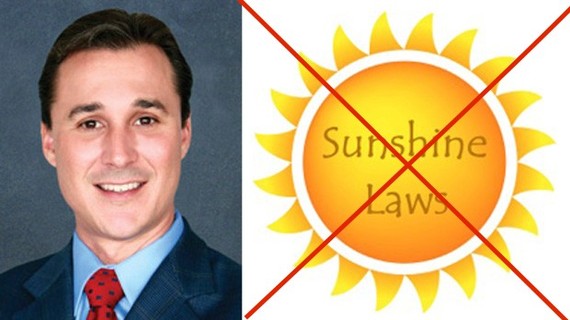 Florida's famous Sunshine Law is under attack in the state legislature today as a state House Committee has already voted to eliminate the provision that guarantees government agencies must pay citizens' attorney fees when public records are illegally withheld.

Republican Senator Rene Garcia proposed the Senate Bill, and maintains offices in both his district - which can be reached by phone at (305) 364-3100 to leave comment -and another office in Florida's capitol of Tallahassee which can be reached at (850) 487-5038 while the legislature is in session as it is right now. Emails to the legislature can be sent through Garcia's official page of office as well.

Please call him, let him know that you prefer government in the sunshine.

Today, judges must order the state and its covered agencies to reimburse citizens' attorney fees mandatorily, and this acts as the only enforcement mechanism to keep Florida's government agencies, school districts, cities, counties, tax districts and town honest about responding to public records requests and providing citizens with the records created at taxpayer expense.

Garcia's proposed bill 1220 would give judicial discretion to award attorneys fees to Florida citizens who've had their civil rights violated under the State Constitution's much ballyhooed "Sunshine Law", which is
Article 24
of its Declaration of Rights also known as Article I.

"This is without a doubt the worst attack I've ever seen on open government in Florida," said Florida open government activist Joel Chandler, "If it passes, it's going to be a train wreck."

"The "shall pay" provision in the Sunshine Law saves taxpayers money in a few distinctly important ways," says Chandler, whose Sunshine Law advocacy includes lawsuits which he pursues pro se (without a lawyer), "First, it greatly incentivizes agencies to settle public records actions, rather than going the distance.

"Second, it limits the amount of fees these cities and agencies spend on outside counsel defending these actions. Also there's an immeasurable value to the possibility of official misconduct being discovered, which acts as a check on government abuses."

Chandler says that he will only settle with a government agency that agrees to ensure future compliance with the Sunshine Law as part of its terms, including remedial training and/or to place and maintain a printed copy of the Florida Attorney General's Government in the Sunshine Manual (free download) in the publicly accessible areas of their government offices.

"Keeping the Sunshine Manual available is intended to avoid future litigation," said Chandler, "so that if I or anyone were to show up in the future and have a dispute about the Sunshine Law, the reference is right there for our public servants to use."

Additionally, changes proposed in Garcia's bill would force citizens to put their governments on further notice of non-compliance and crucially, the changes would require citizens to list all documents for which they wish to sue and deliver those formal notices five days before the lawsuit.

How can a citizen who is denied access to public records, know all names of the records to which they're denied?

Present Florida statute 119 known as the Public Records Act recognizes that delay of delivery constitutes an illegal imposition on Floridians' right to records by allowing an "immediate hearing" which can take weeks to obtain in practice, or more, and cost nearly $500 in legal filing fees and service of process alone.

It seems like this kind of prior notice requirement and discretionary fee system would create a system whereby insiders have access to remedies, but lawyers who aren't favored with judges will be denied fees, or to those shouted down by crowds of government employed attorneys, without any standards or reason since the rest of the Sunshine Law gives no reason for payment other than actual violation.

A Florida Constitutional challenge to the equal protection of this key law is sure to follow if this rancid piece of legislation is passed.

And if it passes, just kiss Florida Man goodbye too.

It'll become nearly impossible to obtain any sorts of public records in a reasonable amount of time when governments face zero penalty for stonewalling the public.

Corruption will flourish in Florida without the Sunshine Law's already expensive and time prohibitive, but ultimately available remedy of the attorney fees and costs paid back to citizens who've been denied public records access.

The Sunshine Law is actually a three-part combination of civil rights protections for Floridians aimed at keeping "government in the Sunshine" which include the Open Meetings Law, the Public Records Law and a listing in the Florida Constitution's Bill of Rights which gives citizens, "the right to inspect or copy any public record" subject to a few limited exemptions.

Pushed by the Florida League of Cities, legislators in both the Florida House and Senate filed bills this session to gut provision of the law which awards attorney's fees to citizens only when state law is broken, and records are unlawfully withheld.

The relevant portion of the Public Records Law, which is Chapter 119 of Florida Statutes reads thusly:

119.12 Attorney's fees.--If a civil action is filed against an agency to enforce the provisions of this chapter and if the court determines that such agency unlawfully refused to permit a public record to be inspected or copied, the court shall assess and award, against the agency responsible, the reasonable costs of enforcement including reasonable attorneys' fees.

The word "shall" is underlined, because as you're about to see, it's the heart of this problematic legislative proposal. Changing it to "may" as shown below is enough to gut the law of any power of enforcement for citizens. 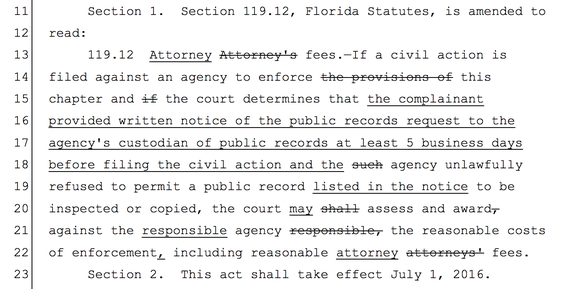 Currently, most lawsuits for public records in Florida are pursued by citizens on a "contingent fee" basis. Without a guarantee of payment, lawyers require hefty up front fees when suing for public records because of the difficulty of encountering a municipal corporation's legal department and bottomless, tax-money filled pockets.

I am also currently pursuing a case in civil court under Florida's public records act. Thousands of pages related to a local zoning decision were withheld by that municipality, and many of the withheld documents have been delivered since the start of the lawsuit in November 2015, but still to this day key documents which are known to exist remain entirely missing.

The case is being handled on a contingent fee basis, because that is the only way this author could afford to pursue the claim.

"Elimination of the mandatory fee provision would significantly undercut Florida's constitutional guarantee of access to public records, and only the wealthiest citizens could afford to enforce the public's rights to obtain records about what the government is doing," said Florida lawyer Sam Dubbin whose Coral Gables, Florida practice includes representing clients filing suit to obtain records.

"Even now, it is all too common for local governments ignore the law and place the burden on the citizen to hire a lawyer and go to court. Any change that further incentivizes local governments to stonewall their citizens would be catastrophic."

'It Was A Murder': Law Enforcement Officers React To Police Beating Of Tyre Nichols

Grant Stern is a professional mortgage broker, radio broadcaster and columnist based in Miami, Florida.