A Florida man has so far avoided arrest after killing his neighbor and bringing the body to his attorney’s office, in what his lawyer calls a “classic case of self-defense.”

John Marshall's lawyer, Robert Harris, told the Huffington Post that his client had been fearing for his life in the days before he was forced to shoot neighbor Ted Hubbell, 65, over a property dispute in Bokeelia on Wednesday.

"A couple days before the shooting, Mr. Hubbell threatened my client's life," Harris said. "Mr. Marshall called police and made a report about it, so we have a history of [Hubbell] being agitated over someone developing this rural property near him."

Marshall, 52, told his attorney that Hubbell approached him in what would be a mock apology wrought with sinister intentions. As Marshall approached the seemingly-apologetic man, Hubbell pulled a gun on him, his lawyer said.

"[Hubbell] brought out his gun and hit [Marshall] in the face with it, knocking out at least one tooth and chipping another, leaving a bloody mess," Harris said. "It was at that point he pointed the gun at Mr. Marshall and Mr. Marshall grabbed his arm."

The two men fell to the ground, fighting and struggling with one another before the gun went off, striking Hubbell and killing him, according to the attorney.

"Marshall shortly after getting his tooth knocked out. Click to reveal." 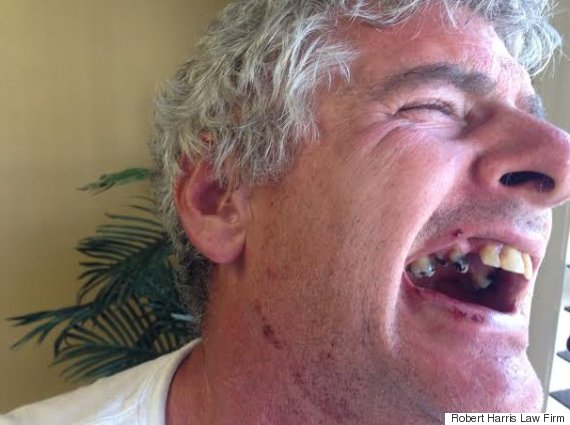 What happened next left Harris dumbfounded.

In what Harris described as a "state of shock," Marshall took his neighbor's body, put it in the back of his pickup truck, and drove to Harris' law firm.

"Marshall was put in a position that none of us could ever fathom, and he did something that doesn’t make a whole lot of sense," Harris said. "But he felt like he could only trust his lawyer. Now why he brought the body, he doesn’t really know. He sees bits and pieces in his mind and flashes, but logically speaking it doesn’t make a lot of sense."

When Marshall arrived at the law firm, he told his lawyer that Hubbell's body was in the back of his truck and covered up.

"As soon as I learned the body was in his truck, I excused myself from Mr. Marshall and called 911," Harris said. "I was in a bit of shock at that point, you can only imagine. Nothing like this has ever happened before. As his lawyer I had to gather my wits about me pretty quickly and deal with the investigation and not worry about my own concerns."

Marshall was taken in by Lee County police for questioning and later released. When asked if moving Hubbell's body constituted tampering with evidence, Harris clarified that there would need to be reasonable proof that his client attempted to destroy evidence, which he said there is none.

The disputed property where Marshall had planned to build his "dream home," his lawyer said.

A spokesperson for the Lee County Sheriff's Office told the Huffington Post that their department is treating this as a death investigation, and "have not ruled one way or the other" if this is a case of self-defense.

Last September, Marshall was arrested on a battery charge following an incident at a McDonald's parking lot. More from News-Press:

According to a Cape Coral police report, the victim said he was struck by a Honda Ridgeline pickup in the restaurant's parking lot after a dispute over a parking spot. A witness gave police the pickup's license plate number, which matched Marshall's, and surveillance video backed up the victim's and witness's version of events.

Harris said he represents his client in that case, but declined further comment.

Neighbors told the publication that Hubbell was a practicing Buddhist, and it was Marshall who was often argumentative over the property. In a report obtained by the Huffington Post, on Feb. 27 Marshall called police to say Hubbell had threatened him over the placement of an outhouse, which Hubbell denied.

A nearby neighbor, Jill Hammer, told News-Press that Hubbell had only asked Marshall to remove the outhouse because of the smell. That's when Marshall called authorities.

"It made it look like [Hubbell] was the aggressor," Hammer told the publication.

Despite prior incidences, Harris said ultimately it was Hubbell who was brandishing a weapon on the day of his death.

"I understand that people who know him or love him believe he’s a peaceful, friendly person," Harris said. "Everyone can find people like that in their lives, but that doesn’t change the fact that Mr. Hubbell brought a gun to confront Mr. Marshall."

Harris said that he had sent private investigators to speak to other neighbors, who claimed Hubbell often "threatened them" and described him as "a bully."

While Marshall stays with his cousin, processing what has happened, Harris said he doesn't expect his client to face charges as the investigation continues.

"At this point it’s a pretty classic case of a man fearing for his life and doing what he had to do."