If there was ever one thing that would compel Republican state leaders to set aside their political and ideological opposition to President Barack Obama's health care reform law, it was going to be lobbying by powerful health care interests in their backyards.

That may be playing out right now in Republican Gov. Rick Scott's Florida.

Representatives of the Sunshine States's hospital industry pleaded with state lawmakers at a hearing Monday for Florida to buy into Obamacare's Medicaid expansion to more poor people, a move GOP legislators have resisted and about which Scott recently has been mum.

The Associated Press summed up the hospitals' case like this:

Florida hospital executives warned they will be hit hard if the state does not expand Medicaid coverage under the federal health overhaul because hospitals will lose federal funding they've been relying on to care for uninsured patients. Florida hospitals spent more than $2.8 billion caring for uninsured patients in 2011, hospital officials said Monday.

There are two main things going on here that worry hospitals and may persuade Florida Republicans to change their tune on the Medicaid expansion.

First, hospitals and other health care providers generally prefer their patients to have some sort of health care coverage lest they be stuck with big unpaid bills. Nationwide, hospitals provided $41.1 billion in so-called uncompensated care in 2011 to patients who couldn't or didn't pay what they owed for treatments, according to an American Hospital Association report issued last month. Putting more people into Medicaid would make that number shrink.

Second, the health care reform law scales back existing federal funding streams that currently serve to partially compensate hospitals that provide medical care to large numbers of people without the means to pay. Whether a state opts to expand Medicaid or not, those dollars are going away.

The American Hospital Association and other big national lobbying groups for the industry looked at those two factors and decided it was in their best interests to endorse the legislation that became Obamacare. But when the Supreme Court ruled states could refuse to expand Medicaid under the law, it threw the equation out of whack. Already, 13 Republican governors have decided against broadening Medicaid.

One Florida hospital executive put it this way, the Associated Press reported:

"If Florida doesn't expand Medicaid, we're going to have the money taken out of one pocket, we just won't get it put back in the other," Tommy Inzina, chief administrative officer at BayCare Health System, said at a House meeting in Tallahassee on Monday.

Of course, state policymakers have another incentive to buy into the Medicaid expansion: a huge influx of federal money. Under the health care reform law, the federal government will pay the full cost of enrolling newly eligible people who earn up to 133 percent of the federal poverty level, which is $15,282 for a single person this year, for the first three years. That share will gradually decline until it reaches 90 percent in 2022 onward.

So if Florida decides to expand Medicaid, the federal government would send $66.1 billion to the state between this year and 2022 and Florida would chip in $5.4 billion, according to an analysis issued in November by the Urban Institute and the Henry J. Kaiser Family Foundation. That money would extend Medicaid benefits to 1.3 million Floridians, the report projects.

(Scott used to tout a much higher cost estimate for Florida's share of the expenses but was forced to drop it after the numbers were revealed to be bogus.)

And the federal government took a step Wednesday that could further push Florida toward a Medicaid expansion. Federal Medicaid officials have tentatively agreed to Florida's plan to enroll more of its Medicaid beneficiaries into private health plans, which has been a big priority for Scott's administration. 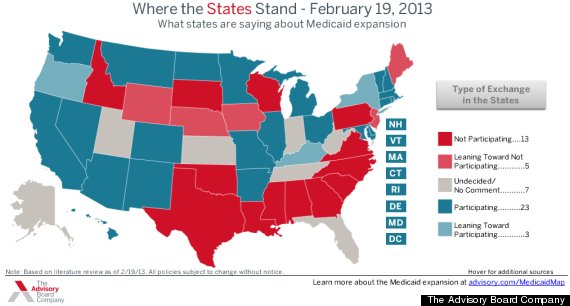