One of Florida's official state animals -- the endangered Florida panther -- was hit by a car last month and left to die on the side on State Road 82 in Collier County, according to Florida Fish and Wildlife.

After FWC rescued the 12-week-old male kitten on the highway on April 23, the feline has been receiving rehabilitation at the Animals Specialty Hospital of Florida in Naples.

But veterinarians say the kitten, whose brother was struck and killed by a car April 7, will be unable to return to the wild -- the accident caused head trauma that will forever impact the panther's life. 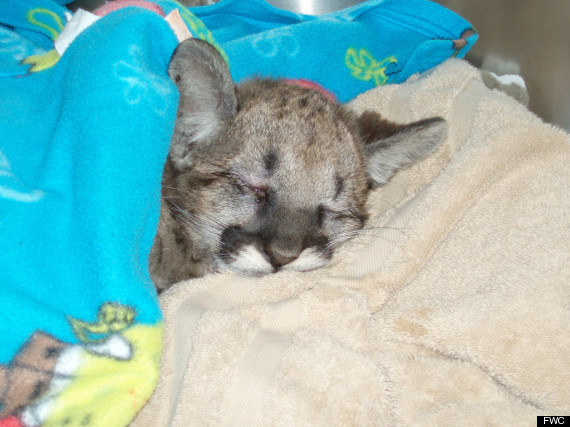 When the kitten first arrived at the hospital, his eyes were swollen shut, he wasn't eating, and he was unable to stand or lift his head, neurologist Michelle Carnes told Naples News.

Now 14 weeks old, the kitten can now stand for short periods of time and get around with the help of a "quad cart," a sling on wheels that was built for a disabled dog. 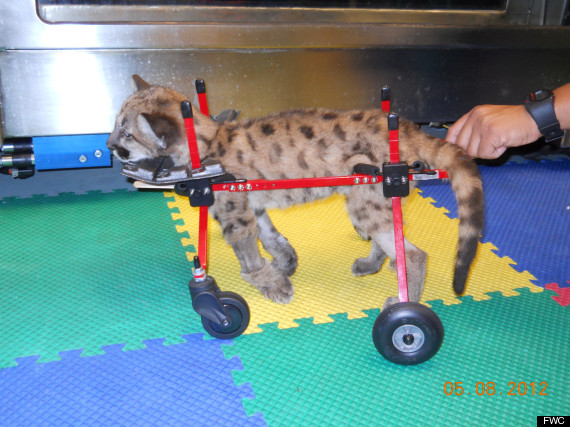 FWC reports that the state's panther population has grown five-fold since the 1980s, when the population hovered at around 20 panthers in the entire state. Now with 100 to 160 panthers roaming Florida's hammocks and forests, drivers have an increased chance of encountering the stately creatures on the road.

"The increase in panther numbers also means that more panthers are crossing roadways," Capt. Jayson Horadam, supervisor of the FWC's Collier County law enforcement office, said last year. "The vehicle collisions that have occurred to date this year were all outside of panther speed zones. We urge drivers to slow down and watch for panthers on all rural roads in panther country."

The FWC says that motorists are the leading human-related cause of panther deaths in the state -- a third of last year's panther morality was traced to car collisions.

Drivers caught speeding near a panther crossing will receive fines exceeding $200 for their first offense, and any violation of more than 29 mph over the posted limit will result in a mandatory court appearance.

Darrell Land, FWC biologist and panther team leader, cautions motorists "to be on the lookout for the large cats in wild areas near panther zones, especially around sundown and sunrise."