As a raft of newly-elected governors take office across the country, the one I'm most excited about is Florida's Rick Scott, who's getting sworn in at this very moment. Scott rode the Tea Party wave past the Republican establishment pick, Bill McCollum, and went on to post a tight victory over Democratic nominee Alex Sink. Of course, prior to his electoral success, Scott was best known as a record-setting fraudster whose bilking of Medicare reached cartoon-villain proportions: under his stewardship Columbia/Hospital Corporation of America pleaded guilty to 14 felonies and was forced to pay a $2 billion fraud settlement, the largest in the history of the United States.

Now, he'll be taking over for Charlie Crist, running a state best known for passels of shambling old people, swamps riven with non-native species of python, and the statewide inability to pass a law banning sex with animals, including, perhaps, the aforementioned pythons. And if there ever was a man conditioned to rule over what Matt Taibbi refers to as "Griftopia," it's Scott, whose overall shadiness is well-established in advance of his taking an oath of office.

It only took a week for Scott to show his shady side, after campaign workers complained that they were paid for their services in gift cards, rather than the hard coin of the realm:

Mark Don Givens told Florida's WTSP News that he was expecting a paycheck after he made phone calls and knocked on doors for the Scott campaign, which made jobs a top issue in the election. Givens said he and other workers were upset after they were told by the campaign that they could not offer them a paycheck and given American Express gift cards instead.

"This would violate both tax laws and labor laws," Melanie Sloan, the Executive Director of Citizens for Responsibility and Ethics in Washington (CREW) told TPMmuckraker in an email. "It looks like the newly elected AG will be investigating the newly elected governor.

Across the country, most governors seem pretty clued in to the fact that Americans are struggling in this economy, and are responding by dialing down the inaugural festivities. As incoming Michigan Governor Rick Snyder put it, "It's a tough environment...You want to set the right kind of tone." Not so with Scott, who plans a gaudy self-celebration:

Before he's even taken office, however, some Floridians are criticizing Scott for planning an extravagant inauguration ceremony in the midst of the state's economic turmoil. The Governor's Inaugural Ball will take place in Tallahassee on Jan. 4, and any Floridian that can scrape together $95 can attend. So far, Scott -- who won by the narrowest margin in 134 years in a Florida gubernatorial race -- has raised $2 million for the ball, primarily from large corporations that conduct business in the state.

When challenged on the expensive ceremony, Scott responded that "he's not sure what the right number is" to spend on an inauguration, and that "it's important to have a celebration." This is a view that was not held by his predecessor, Gov. Charlie Crist, who canceled his inaugural ceremony in 2006 after similar criticisms over the cost and scale of the party. "I made a mistake, and, yes, it was a doozy," Crist said at the time. "Upon reflection, it doesn't feel right to me when there are people having trouble paying their insurance bills and making ends meet."

Scott's inaugural festivities include a trip to Disney World, the go-to location for U.S. governors seeking refuge from the demands of their constituents.

Because so many people move to Florida in order to die, and then fail to do so, there is a broad swath of the voting population that just doesn't care about how anyone in the state gets educated. And so Rick Scott's plan to turn Florida's public schools into a giant corporate social experiment isn't going to encounter much resistance. What it will encounter is graft by the ton, since the proposal, as Mother Jones' Stephanie Mencimer points out, is "a fraudster's dream."

As soon as the state starts handing families $5500 a year, it's virtually assured that enterprising thieves will devise various schemes to help them part with those funds, including by starting "independent" for-profit virtual schools, charter schools, and other predatory "educational" institutions. While the idea of privatizing the education system may seem like a big money saver, and no one really loves school bureaucracies, putting that much taxpayer money out there without adequate oversight (i.e. bureaucracy) is a formula for disaster.

It's not just a hypothetical harm, as charter schools in many states have demonstrated. Charter schools get paid by the number of kids they enroll, and they are free from much of the bureaucracy Republicans like to bash so much. All that money mixed with all that freedom hasn't produced much in the way of an education boost: Charter schools perform no better and often much worse than traditional ones. But they have produced a bumper crop of fraudsters.

In recent years, the US Department of Education's Office of the Inspector General has been raising red flags about charter school fraud and embezzlement, a problem that is increasing. In March, the OIG wrote that it had opened more than 40 charter school criminal investigations that resulted in the convictions of 15 charter school officials, with 24 cases still pending. Most of the cases involved charter school operators and employees who falsely increased enrollment figures and used the extra money to bankroll lavish lifestyles. They often engaged in testing and grade-fixing antics to ensure the money kept rolling in. At the time the report was released, prosecutors had recovered more than $4 million stolen by charter school employees and operators since 2005.

Welcome to the Columbia/HCA-ization of Florida schools, everyone! That former D.C. schools Chancellor Michelle Rhee wants to help out with this should, for all intents and purposes, halt plans for her canonization.

The New Front In The War On The Unemployed

Currently, the nation's unemployed face a steep hurdle on the road to getting their lives on a stable footing -- there exists only one job opening for every five job seekers. That basic fact should be seen as the larger problem in this massive unemployment crisis, but the economic advisers who will be guiding Rick Scott are instead telling him that the problem is that people are shiftless and lazy. Citing Alan Krueger, a Princeton University professor of economics, Scott's economic advisers have been telling him that the unemployed spend only a scant amount of time looking for work and are otherwise living high on the hog of unemployment benefits. They recommend that Scott "tighten job-search requirements for people getting benefits, cut off assistance for those who don't comply and assign community work for those who don't get a job in 12 weeks."

Naturally, as ThinkProgress has noted, their advice is predicated on massive distortions of Krueger's work.

Krueger, who is a well-regarded professor of economics at Princeton University, took issue with the characterization of his research.

First, he said, the research -- which was conducted during the stronger economic period of the mid 2000s -- actually shows that the average amount of time spent job-searching is double what the report says -- more than 40 minutes a day, not 20.

Secondly, "the unemployed in the U.S. devote more time searching for a job than unemployed workers in other countries," Krueger wrote in an e-mail, "yet they [Scott's team] make it seem that the unemployed put little effort into finding a job."

And lastly, he added that the real problem faced by the unemployed today "is lack of jobs, not overly generous benefits." The team, he said, "misspelled my name and misused my study!"

Indeed, it only takes a few minutes access to Google to sufficiently prove that unemployed Americans are actually busting their humps, trying to find scarce work.

Maybe I spent too much time watching "Miami Vice" growing up, maybe it's the fact that I witnessed a drug arrest with swarming, rifle-carrying cops at a Burger King drive-through within 20 minutes of arriving in Florida for the first time, but one thing I associate with the Sunshine State -- besides Disney and the elderly -- is drugs, lots and lots of drugs. But maybe there's nothing to Rick Scott's plan to eliminate the Jeb Bush-created Office of Drug Control.

Or maybe there is:

"We've got a heck of a problem in this state with drugs. And it's not going to be over any time soon," Grant said. "What you're saying by getting rid of this office is that's not a priority. And that's a mistake. Because it is a priority. We all have been connected to somebody with a substance abuse problem, and we all know how devastating it can be for a family and for our economy."

Fontaine said a recent study showed that substance abuse has a $43 billion negative impact on the state economy due to loss of job productivity, and costs associated with hospital and emergency room visits and incarceration. Fontaine said about 65 percent of Florida inmates have substance abuse problems. Meanwhile, a 2009 Florida Department of Law Enforcement study concluded seven people in Florida die every day due to prescription drug abuse.

So basically, things in Florida are headed in the precise direction I imagined they would under the direction of America's Top Fraudster Scumbag: toward a future in which everyone is poorly educated, high on drugs, underemployed and paid in Wal-Mart gift cards, as Scott lavishes himself with attention and perks. Good luck with that, Florida.

UPDATE: Rick Scott, magnet for hecklers, was apparently interrupted by one today, as he delivered his inaugural speech:

"You are a criminal, you are not a Christian," the heckler said at the beginning of the speech.

The governor did not respond, just paused, then kept talking. Capitol police quickly quieted him. There also were a couple of protesters in the crowd.

The heckler raises an interesting point! In additional fun Rick Scott news, Tampa Bay Online provides us with a pair of word-clouds, for our amusement. The first is derived from Scott's speech: 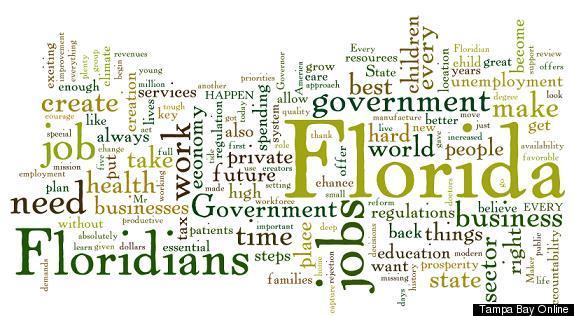 The second is titled, "One Word Feelings About Scott Taking Office": 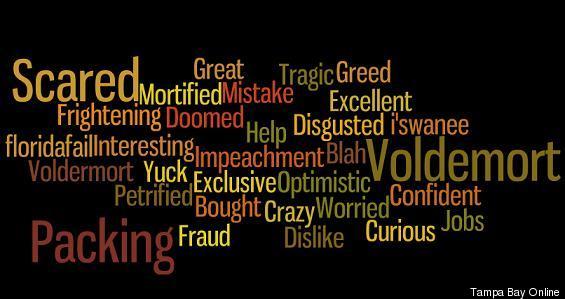