It's interesting how you can find out what's really on someone's mind when they're under pressure. It happened to Florida Attorney General Pam Bondi, but if you blinked, you may have missed it. But this is something we cannot ignore.

During her interview with CNN's Anderson Cooper following the Orlando tragedy, Ms. Bondi claimed (on Fox News) that she expected to talk about one topic, only to be called out by Mr. Cooper on her anti-gay rhetoric. When asked if she was being hypocritical about supporting gays on that day after previously fighting gay marriage with thousands of Floridians' tax dollars all the way up to the U.S. Supreme Court, she fought back by telling Mr. Cooper that she was merely defending the Florida Constitution when she stated that gay marriage would "induce public harm" to Floridians.

When she realized that her interview was not going well, she decided to shift the subject. It sounded like a statement that came from nowhere. A non-sequitur. She went from saying that she insulted the LGBT community because she was defending the Florida Constitution to a whole different subject.
Here is the transcript from CNN:

It's funny how that topic floated to the top of an already very busy mind. Even though it's possible she could be investigated because she declined to pursue the Trump University case in Florida after taking a campaign donation from Donald Trump,(which has to be on her mind) the topic of medical cannabis pops up.

That first medical marijuana amendment she opposed failed. When the revised "Florida Right to Medical Marijuana Initiative," Amendment 2 , went to the Florida Supreme Court for review after the petitions were filed, Attorney General Bondi decided not to fight it this time. "Based on the Court's decision in 2014, I have not filed a legal challenge to the current amendment, but my concerns with it are the same," Bondi said. 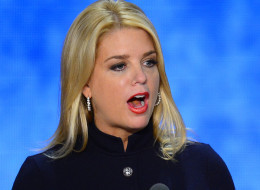 Florida Attorney General Pam Bondi speaking out against the medical marijuana initiative in 2014. Photo courtesy of the Huffington Post.

Many people who support the new Amendment 2 cheered, and optimism started to grow. But there were a lot of folks who thought that Amendment 2 was going to pass easily in 2014 as well. It won a majority, but not the required 60 percent.

It's important to note that many young Britons felt that there was no way the Brexit would pass, either. So they didn't show up to vote. It wasn't until the results were in that they began to protest, calling for a new referendum. Something similar happened to the younger voters in Florida, who showed up at the polls in conspicuously lower numbers than had been suggested by the polling.

Bondi's verbal reflex against medical cannabis shows there's strong opposition that cannot be ignored. Unfortunately, she wasn't alone in her ways of thinking when she went to the courts to fight gay marriage, and she isn't alone here. There are many in Florida who are just not ready in their minds for legalizing medical marijuana.

A case in point: my wife, Monique, lost her eyesight primarily from glaucoma, still has pain and gets treated with burning drops and injections. When I wrote in a Huffington Post blog that she would like to use medical marijuana for the pain, she and our family got hassles from every direction, including our neighbors.

To get the 60% needed to pass this ballot initiative in November we must consider three questions:

1. Who is against this source of a large number of medicines that actually predates our modern civilization, which holds the keys to treating everything from chronic debilitating pain to epilepsy to even cancer, and does, without side effects, what Big Pharma, with billions of dollars to spend on research, has yet to accomplish?

2. How do we get them to understand that there are Floridians suffering and even dying who need these medicines because the ones we have now either don't work well or don't work at all?

3. How do we get the message to them that they have to vote Yes on Amendment 2?

The first solution is my upcoming book, "The Great Green Hope" which will be released later this summer. It highlights the stories of real people whose lives have been saved or treated by the use of medicines derived from cannabis. Watch for it and look for someone who may need it. It will change their minds and lives, and maybe save them one day. 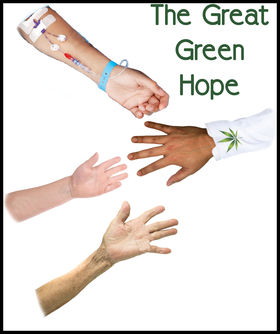 The second solution would be to get those with "celebrity status" who use medical marijuana for real medical reasons to start explaining to Floridians that this is not about getting high, it's about getting well. It's not about caregivers selling joints to 12-year-olds; it's about caring about someone who is suffering.

The opposition to Amendment 2 is mainly funded by Mel Sembler, who believes anyone who uses cannabis is an addict and deserves "Clockwork Orange" treatment (like those unfortunates in his involuntary rehab centers), and Sheldon Adelson, who generously sends massive amounts of money to Israel for medical cannabis research, but funds the opposition here to push his favorite conservative candidates and his casino agenda, with a war chest of $10 million.

I would like to invite well known personalities like Whoopi Goldberg, who uses a vape pen to control the pain from her glaucoma; Montel Williams, who uses it to manage his Muscular Sclerosis; Oliver Stone, who used it to avoid the agony of PTSD; Morgan Freeman, who manages the pain from a near-fatal car crash; and a host of other great celebrities who have used their fame to advocate for the medicine that helped them and lend their star power to us fighting here in Florida.

To the celebrities I mentioned and the ones who have not yet stepped into the spotlight to save millions of lives, Florida is waiting for your help and guidance.

Then if Amendment 2 passes, we get to see if Pam Bondi will defend it in court, like she promised.