Thousands of dollars have been raised for a Washington florist after she was fined $1,000 for refusing to provide flowers for a gay couple’s wedding.

Supporters of Barronelle Stutzman, a 70-year-old florist in Richland, Washington, have donated more than $94,000 to a GoFundMe campaign that seeks “to protect Barronelle and her livelihood.” 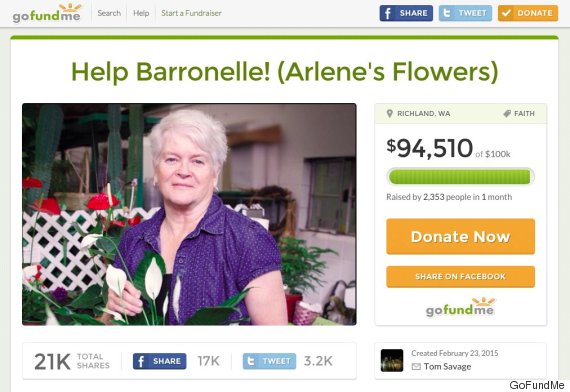 Stutzman, a Christian, refused to sell flowers for the 2013 wedding of longtime customers Robert Ingersoll and his partner, Curt Freed, for religious reasons.

“[Robert] said he decided to get married, and before he got through I grabbed his hand and said, ‘I am sorry. I can't do your wedding because of my relationship with Jesus Christ,’" Stutzman told KEPR in 2013.

"It really hurt because it was somebody I knew," Ingersoll said. "We laid awake all night Saturday. It was eating at our souls. There was never a question she'd be the one to do our flowers. She does amazing work."

Last month, a judge ruled that Stutzman's refusal to sell flowers to Ingersoll and Freed violated the Washington Law Against Discrimination, which makes bias based on sexual orientation illegal. She was ordered to pay a $1,000 fine, plus $1 for court costs and fees.

Following the ruling, Stutzman’s legal team said that the fine, together with additional penalties and fees, would “financially devastate Barronelle’s business and personal assets.”

Thanks in part to the promotional efforts of conservative talk radio host Dana Loesch, the GoFundMe campaign in support of Stutzman went viral this past week. Thus far, more than 2,300 people have donated money to the florist.

As the Seattle Times points out, this campaign bears similarities to a fundraiser launched for Memories Pizza, an Indiana pizzeria that closed after its owners said the restaurant would not cater a gay wedding in light of the state’s Religious Freedom Restoration Act. The owners said they shut their doors after receiving threatening messages. A GoFundMe campaign for the pizzeria raised more than $842,000 in four days.