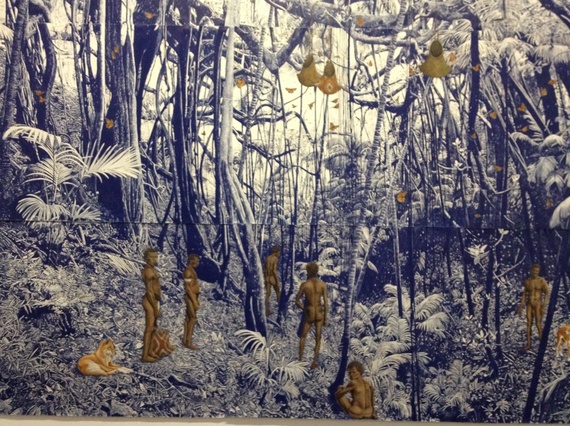 The rock carvings and paintings by Aboriginals in the outback of Australia are considered to be some of the oldest examples of the artistic creativity of man on this continent. Some dating back at least 25,000 years are representations of the lives of people who claim a heritage of over 50,000 years, and are still dramatically accessible to visitors today.

Recently I was among the thousands of tourists who travel yearly up through the Northern Territory near Darwin to a prime site for rock paintings in and around Kakadu National Park. While my visits to expressive rock carvings and paintings were fascinating, I was most interested in seeing the art that is being produced in recent times.

Fifteen years ago during my first visit to Australia, I met with a number of Aboriginal artists, mainly female, working in Sydney. Several of them had organized a cooperative called Boomalli, an Aboriginal Artists Cooperative devoted to the support and exhibition of their work throughout the country. As I returned in 2014, I found that Boomalli was still active with a lively schedule of exhibition programs that included paintings, sculpture, photography and mixed media works in and around Sydney. Seeing this work had been my introduction to the contemporary Aboriginal art scene. Brenda Croft, artist and curator, had introduced me to members of the coop then and I was impressed by the breadth of their talents and their dedication to making art.

My focus this trip was a journey up through the Northern Territory with a final stop in Darwin, the capital, and the seat of Aboriginal culture on the continent. With stops in Uluru -- aka Ayers Rock, and Alice Springs on the way to the top of Australia, I was able to visit several galleries, workshops, and informal presentations of fine art and crafts that represent the current output of artists in the region. Artists are now making their livings producing works for the steady stream of tourists from all over the world who are eager to buy them

Now I should add that in my meanderings around Alice Springs and Darwin I did see the expected smatterings of "Aboriginal art" in souvenir shops, gift shops, and variety goods stores. I couldn't avoid running into clutches of mass produced reproductions on a variety of materials that read 'made in China' - bringing a smile to my face. No matter what continent I visit, I encounter the same thing.

Some of the best presentations of contemporary Aboriginal art in Darwin were at the Museum and Art Gallery of the Northern Territory. This expansive contemporary exhibition space showcases the history of the region in well-designed multi level galleries, several with a focus on contemporary art. A juried exhibition of painting, photography, and mixed media works were hung in another large gallery space. Artists included were from the Northern Territory and represented emerging as well as seasoned artists from Darwin.

One gallery was hung with the works of Danie Mellor, a mixed heritage Australian artist who, with figurative representations of colonial period European settlers and Aboriginal natives. He presents sometimes disturbing scenarios of a co-habitation that is fraught with conflict and violence with each other and frequently with the creatures in the environments they occupied.

Sales of Aboriginal art continue to grow exponentially and now represent a significant percentage of art sales on the continent. The still widely applauded 'dot' paintings hold an important place in the Aboriginal art vocabulary representing ancient origin stories called Dreamtime. Today artists are using a palette of images, themes and materials that feature a more contemporary iconography of life in modern times.

I wonder what I will find when I return again to this arts driven country down under where Aboriginal artists find inspiration from the outback to the shining cities and are eager to share their creative bounties with the world where it is welcomed.