While flu season in the U.S. is typically at its worst in January and February, the beginnings of the virus typically start to appear as early as October. While we wouldn't wish the misery of the flu -- read: sneezing, sore throat, fever and general miserableness -- on anyone, if you are one of the unlucky ones to fall ill, there are some things you should know about what's happening inside your body. We talked to Gregory A. Poland, M.D., a professor of medicine and expert in vaccines and infectious disease at the Mayo Clinic, and John J. Treanor, M.D., chief of infectious diseases at the University of Rochester Medical Center, to find out what exactly happens in your body when you have the flu. 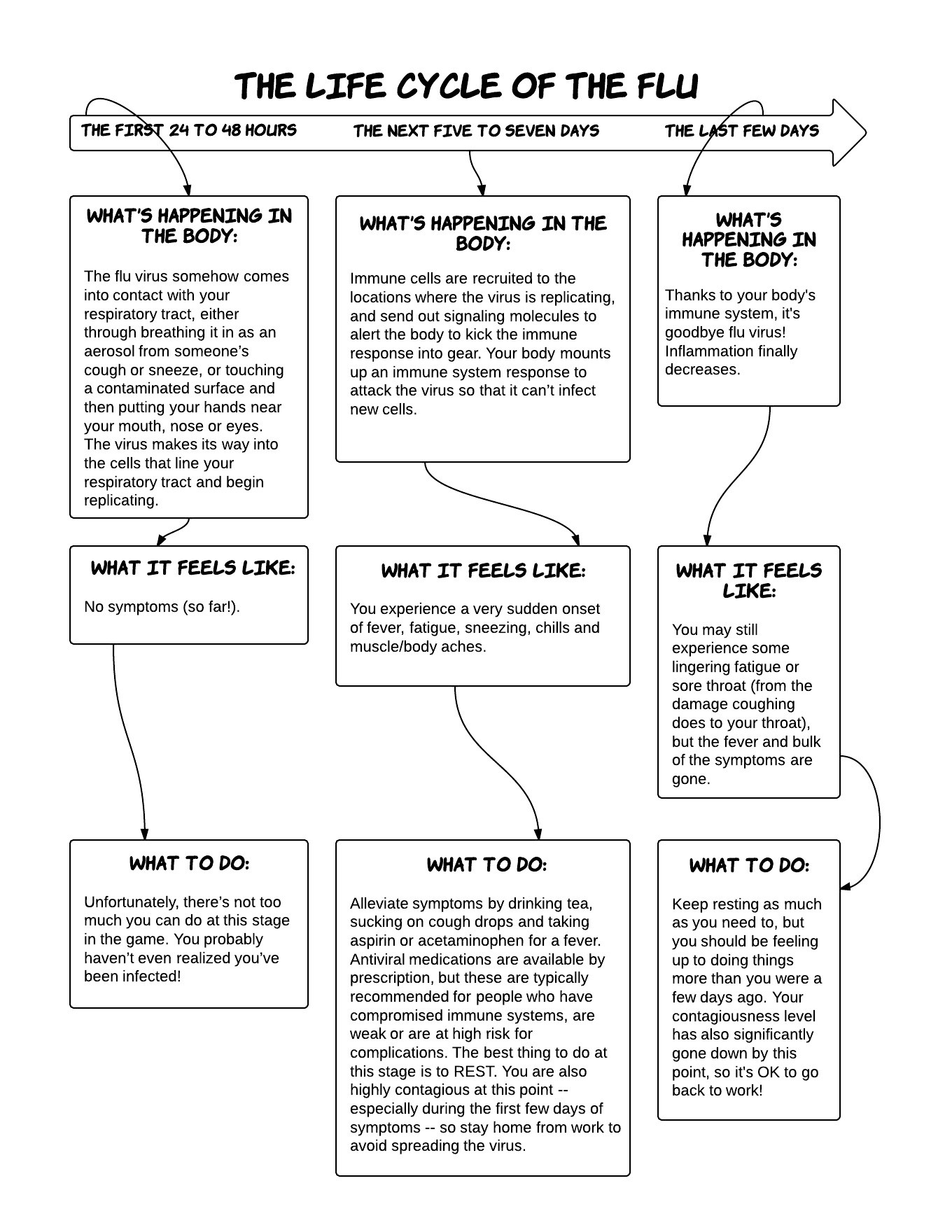 A word on contagiousness: You are contagious so long as you are experiencing symptoms (since symptoms often involve coughing and sneezing, which can spread the virus through water droplets). Fever is also a good indicator that you're still contagious: "When you have fever and fatigue, you're probably still contagious," Poland says. "You're no longer contagious when you're not febrile and you don't have the muscle and joint aches and pains, and severe fatigue."

However, Treanor notes, you are more contagious at the beginning of your illness than the end because you're shedding more of the virus.

In addition, children may experience flu symptoms for longer, and be more contagious for longer, than adults with the flu. That's because they haven't yet built up antibodies to the virus, "so the virus multiplies to a much higher concentration than it would in an adult," Poland says. So kids might be contagious for seven to 10 days, compared with the five-to-seven day window when an adult is contagious.

It's also important to note that these day estimates are just that -- estimates. The duration of the flu may differ from person to person. In addition, the flu life cycle may be significantly different for people who have compromised immune systems or chronic conditions, or who are more at risk for dangerous complications from the flu. For those groups, influenza can be extremely dangerous because it exacerbates current conditions or causes pneumonia and other illnesses.

Treanor adds that the life cycle of a cold caused by rhinovirus is typically similar, but that the onset of cold symptoms is often slower than those of the flu. In addition, cold symptoms are different from those of flu. Cold symptoms include sneezing, runny nose and nasal symptoms, while flu symptoms include fever, cough, muscle pain, fatigue and sore throat. And unlike colds, which have no cure and can't be definitively prevented, the flu can be prevented with a flu shot.