"The people are revolting", goes the classic gag in Mel Brook's History of the World Part I. Well, they are certainly angry, distrustful and fed up.

When the Open Government Partnership was founded five years ago, it seemed that a glorious new era of responsive government was upon us. Instead, government seems increasingly out of touch with its citizens. In Europe and Central Asia, one out of three people see corruption as a key problem facing government.

Yet, while political elites (rightly) panic and soul search, thousands of public servants are quietly toiling away to improve the basic functions of government, trying to modernize and update citizen services.

Their days aren't filled with drama or the sugar rush of 'post truth' politics. Rather they are thinking about the basic building blocks of the state and its provision of services, trying to work out the best way to spend government's often dwindling public resources.

Contracting with private companies comprises about a third of government spending, a whopping US$9.5 trillion every year. It may not be a topic to immediately set the pulse racing but it is where government spending either does, or does not, get converted into tangible benefits such as roads, schools or hospitals that we all rely on.

It is also government's number one corruption risk, as huge sums money, discretion and relative secrecy collide. Massive corruption scandals have rocked public procurement around the world: literally shattering schools in China, killing patients in Romania's hospitals; and seeing millions of dollars siphoned off to personal bank accounts rather than being used to educate Chicago's school kids.

Open contracting can revolutionise this public dealmaking by making documents and data throughout the contracting cycle 'open by default' based on a global best practice data schema, the Open Contracting Data Standard. This can make contracting information accessible and actionable to help business, citizens and journalists analyse, monitor and scrutinize the process to shape better outcomes.

Turning yellowing stacks of paper into actionable information provides a basic building block for broader public benefit such as better deals by governments, a level playing field for business, less fraud and corruption, and quality goods and services for citizens. 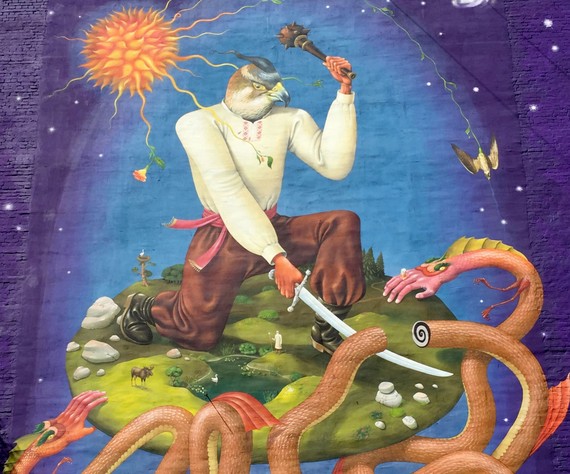 Photo: Behead the hydra of corruption: a mural in Kiev

Ukraine has seen just that when a group of government officials, civic activists, businesspeople and citizens came together after the Revolution of Dignity in the winter of 2014, to radically open up traditional public procurement and overthrow an opaque and corrupt system run by self-serving elites. They put open data and participation at the foundation of what is now known as ProZorro - a fitting allusion to the heroic defender of the unjust. Now everyone can see everything. This has helped government get better value for money and has saved a fortune - over 13% in savings. It has also helped rebuild trust of companies doing business with government. Dismantling the country's kleptocracy will take time but the first round has gone to the reformers and to open contracting.

In the UK, small business, often shut out of complex contracting processes will soon benefit from having better access to data on government opportunities. The government is relaunching its Contract Finder portal for publishing contracts opportunities. Based around the Open Contracting Data Standard, it will make the data accessible and actionable. Infomediary businesses like the Spend Network can then analyze and share that information aspirant contractors, and provide targeted visualizations that explain where and when opportunities open up. Better data on how governments spend their money also let companies know if and when it is worth the time and money to prepare an offer. This is fundamental to create fairer competition and leveling the playing field for companies.

In Slovakia, full publication of government contracts has helped expose wasteful spending and fraud. In 2007, the Ministry of Development posted a tender request for construction services of € 120 million hidden away on a small notice board in the hallway inside the ministry building. No surprise then that a firm known to have close ties to the head of the ruling party won the contract. People care: When Slovakia made it mandatory to publish contracts online, over 8% checked a public contract in the last year. Competition by businesses has doubled too.

But it can't be transparency for transparency's sake. What counts is real granular information that people can use, and ultimately check, that better works and services for citizens have been delivered. One great example is Budeshi, a Nigerian civil society collaboration that tracks public health and education budgets and contracts through to their delivery in remote villages. Open contracting needs to loop business, government and civil society into a virtuous circle if it is to succeed.

Momentum is building. At the London Anti-Corruption Summit this year, 40 countries have agreed that public contracts should be open by default - a cornerstone of open contracting. Fifteen of this year's 40 or so new action plans in the Open Government Partnership include a commitment to open contracting.

This is good news. But more contracts need to be opened up so that all of the benefits can kick-in. Feedback loops have to become much smarter in capturing citizens and business needs and integrating these into open government ideas right from the start. Think of this as shift from 'supply led' transparency where the government tells you something to 'demand led' where the users shape the terms according to their needs. Openness needs to convert into something of real, tangible value if it is to succeed and be sustainable, especially in the current political environment.

When his musicians get stuck, composer and producer extraordinaire Brian Eno advises them to make a brick rather than build a wall. That is good advice in these uncertain times.

For us, it is about focussing back down onto the bricks - and the mortar - of public benefit - namely public contracting and encouraging sustainable, strategic changes to make sure that it delivers great results for public money.

The dream of a responsive and just government is the dream of citizens everywhere: better, smarter, more open public contracting can help cement those ideals in policy and practice.

This post is part of a series produced by The Huffington Post and the Open Government Partnership, on the occasion of the 2016 OGP Global Summit in Paris . The Open Government Partnership is an international coalition of over 70 governments and thousands of civil society organizations working on open government initiatives. This series aims to highlight some key issues. For more information about OGP, visit http://www.opengovpartnership.org, #OGP16