An investigation by Larry Pynn at the Vancouver Sun has revealed a cruel underbelly to B.C.'s dairy industry--the province and ag sector that have historically been thought of as among the less inhumane for animals.

Under freedom of information legislation, Pynn obtained farm inspection documents from the provincial Milk Board (a public body created by statute to regulate the production and marketing of milk). The animal welfare inspection program started on Jan. 1, 2015.

Over the span of just 18 months, the documents reveal numerous shocking problems, including an inexcusably high number of severely lame cows (some so lame they needed to be euthanized), dirty and wet living quarters, insufficient access to food, such severe crowding there wasn't sufficient space for lying down, and careless barn design causing neck lesions and tails being torn off.

These conditions were found during announced inspections--the farmers knew someone would be coming to check up on the conditions of the farms and animals and that they'd possibly face sanctions for non-compliance. This is the best the farmers could do with time to prepare and be on their best behaviour. And on follow-up inspections with specific orders for what to improve, a tenth of all farms still weren't compliant with minimal animal welfare standards.

Such cruelty is illegal under animal welfare laws and perhaps even criminal anti-cruelty laws. So surely these heinous acts were prosecuted, right?

Wrong. According to the vice-chair of the Milk Board, Tom Hoogendoorn--himself a dairy farmer--they don't want to "wield a big heavy stick," instead favoring the time-honoured penalty of stink eye: "Believe me, if farmers are found to be a little off side, they feel the peer pressure." Yes, really. They won't even slap you on the wrist--disapproval should do it.

By law, the composition of the Milk Board is four dairy farmers, one non-farmer selected by a Milk Industry Advisory Committee, and a chair (whose qualifications, the job posting reveals, include involvement with the agriculture sector). In other words, the Milk Board is a milk industry body enforcing the rules it created with methods of its own choosing.

In doing so, the milk industry is effectively opting itself out of animal welfare laws, shutting out the public and governmental oversight, and relying on peer pressure within the insiders' club to (fingers crossed!) hope animals will stop enduring egregious and illegal suffering.

It's so obviously a conflict of interest--not to mention undemocratic--for the dairy industry to be policing itself while unilaterally exempting itself from animal welfare laws, and yet, this scheme is actually better than what's happening in the rest of the country.

Animal agriculture is an unregulated industry when it comes to animal welfare: no required standards, no independent inspections to ensure minimal animal welfare conditions are met, and no compliance mechanism to correct the behaviour of neglectful and abusive farmers or to get them out of the business.

Farmers are fond of saying they love animals, but it's not a form of "love" I'd wish on an enemy. Here's Hoogendoorn's explanation for why they use electric prods on gentle, grieving mother cows: "It's better than kicking her in the ribs 10 times -- and less painful." That's not love--it's an abusive, toxic relationship that the victim needs out of.

And anyway, as Pynn noted, cows used for milk "stick around for an average of 2.5 years before being shipped to the slaughterhouse for meat -- proving there is a financial limit to a farmer's love for his livestock."

Indeed. The entire industry is premised on impregnating cows, taking their babies away, and killing them for hamburgers at a young age when their bodies collapse from the back-to-back pregnancies, all in the name of profit. 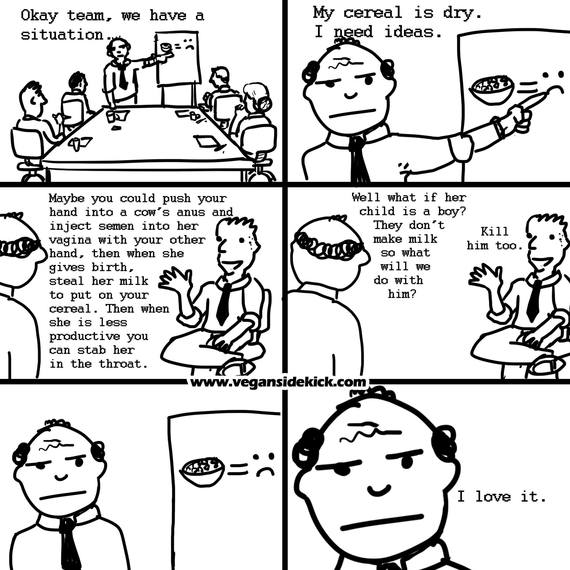