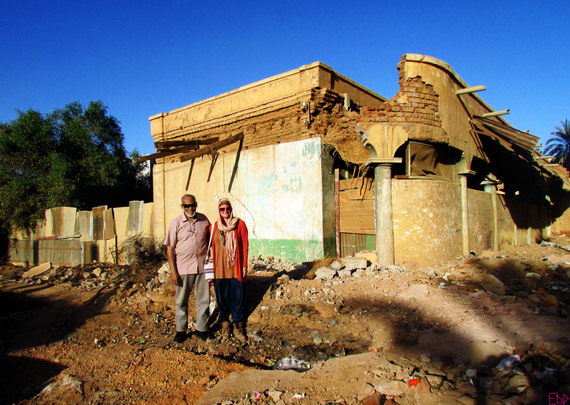 For the past year, I've been re-tracing the footsteps of Malcolm X in Beirut and Khartoum with his old friends from Lebanon and Sudan. Malcolm's travels in the Middle East and Africa put him in touch with the most progressive revolutionary movements of his time. His ongoing contacts with Sudanese students, scholars, and religious leaders in Lebanon, Sudan, and America helped transform his beliefs about religion and race.

In 1959, when Malcolm first traveled to Sudan as a spokesman for the Nation of Islam, his host was Malik Badri. Though at the time Malcolm was espousing none but Elijah Muhammad, he listened respectfully as Malik explained the pillars of Islam with a slideshow on the Nile, after having lunch in the house pictured above. Years later, Malcolm wrote: "I was impressed the most by the Muslims of the Sudan. Their religious piety and hospitality are unmatched anywhere. I really felt in heaven and at home there." 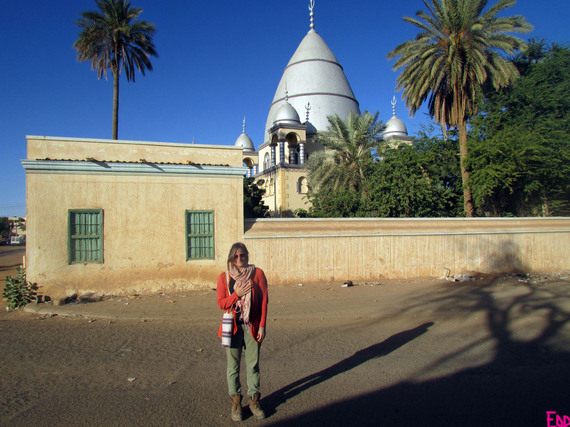 Malcolm, whose "alma mater was books," never let his lack of a formal education prevent him from studying historic struggles for justice to contextualize his own fight for "human rights." "When Malcolm arrived in Khartoum," Malik told me, "he was already well-read in the history of Sudan," and "fond of the Mahdi and his 19th century revolution--as a revolution at that time between the blacks and the whites, and the way that he had defeated the British in a number of battles."

Malcolm's relentless quest to expand his knowledge and sense of self led him to contemplate direct challenges to his beliefs. When Ahmed Osman, a Sudanese student from Dartmouth College, challenged Malcolm face-to-face in Mosque Number 7 in Harlem in 1963, Malcolm convinced the hostile crowd of hundreds to listen with an open mind to Osman's belief that Islam has no place for hatred based on race. The two men were so impressed with one another that they began corresponding by mail. After Malcolm left the Nation of Islam, he turned to Osman for spiritual advice. 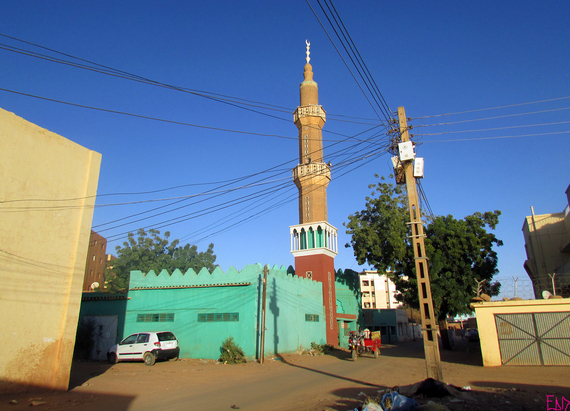 Malcolm's political and spiritual transformations were made possible in large part because of his radical humility in changing his earlier beliefs. In 1964, Malcolm met his Sudanese spiritual advisor, Sheikh Ahmad Hassoun, in Mecca--where Malcolm's views on race were challenged by the spirit of the hajj: "in the words and in the actions and in the deeds of the 'white' Muslims, I felt the same sincerity that I felt among the black African Muslims of Nigeria, Sudan and Ghana." The "overwhelming spirit of true brotherhood" that Malcolm experienced on hajj inspired him to write in a letter from Mecca: "I'm a human being first and foremost, and as such I'm for whoever and whatever benefits humanity as a whole."

When Malcolm traveled from Saudi Arabia to Lebanon, Malik tried to arrange for Malcolm to speak at the American University of Beirut, where Malik was teaching. After the university's President refused, calling Malcolm an "enemy of America" and "anti-American," Malcolm spoke instead at the Sudanese Cultural Center in Beirut. My Lebanese colleagues and Sudanese friends who were present remember vividly Malcolm's sharp sense of humor. Despite death threats at home, Malcolm deployed humor to diffuse heightened tensions, and bring people from different backgrounds together. Malcolm's Sudanese sheikh was also known for his strong sense of humor--even when giving talks in the mosque. When Malcolm brought Sheikh Hassoun back to Harlem to serve as the mufti of Muslim Mosque, Inc., they urged Muslims, Christians, and Jews to work together as "brothers." 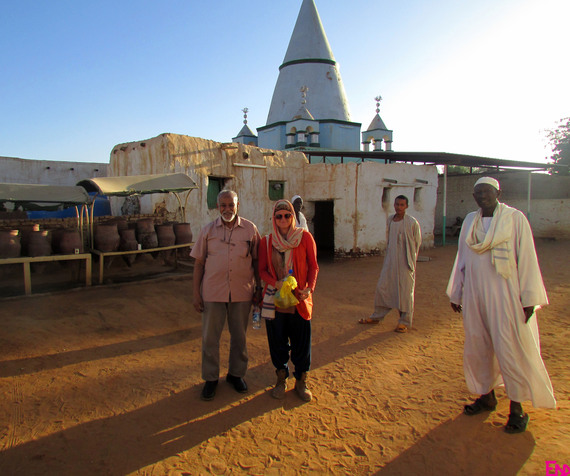 Before leaving Beirut, Malcolm told Malik that back in the United States, "he expected to be harassed by the followers of Elijah and that he might be murdered." Upon Malcolm's return, his house was firebombed, prompting him to return east to urge African heads of state to pass a UN resolution framing the plight of African Americans as an "international problem of the world" in violation of the United Nations Declaration of Human Rights and the United Nations Charter itself.

When Malcolm returned to America, Ahmed Osman arranged for him to speak at Dartmouth and Harvard on human rights, imperialism, and capitalism. The best hope for equality, Malcolm concluded at Dartmouth, rested with the "youth of the world" and the "humans of the world working together." 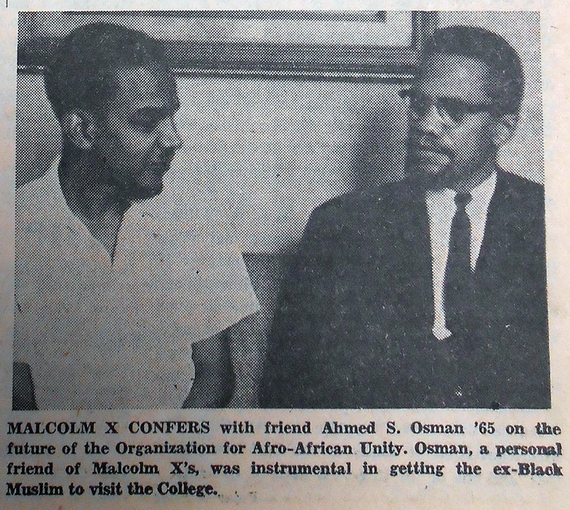 After Malcolm was assassinated on February 21, 1965, Sheikh Hassoun prepared his body for burial, and Ahmed Osman denounced the media's "distorted" memorialization of Malcolm. In the Dartmouth College newspaper, Osman wrote: "This was Malcolm as I had known him. They accused him of violence and he was never involved in any violence; private or public, overt or covert. They accused him of preaching segregation and being a racist, and he never advocated any of this since his return from the pilgrimage to Mecca."

I've very grateful for the time I've spent this year with Malcolm's old friends and acquaintances from Lebanon and Sudan--their memories of Malcolm have humbled and transformed me. Now when I'm marching for racial justice in New York or teaching Sudanese migrant workers in Beirut, I'm thinking about Malcolm's insistence on seeing all international struggles for justice, equality, and dignity as one. When I'm watching videos of terrorists killing in the name of Islam, I'm thinking about Malcolm's radical decision to transform his righteous anger into a universalist message of justice. And when I'm taking friends to visit the Audubon Ballroom in Harlem, I'm wondering how Malcolm would react to the Chase Bank branch occupying the building where he was killed. 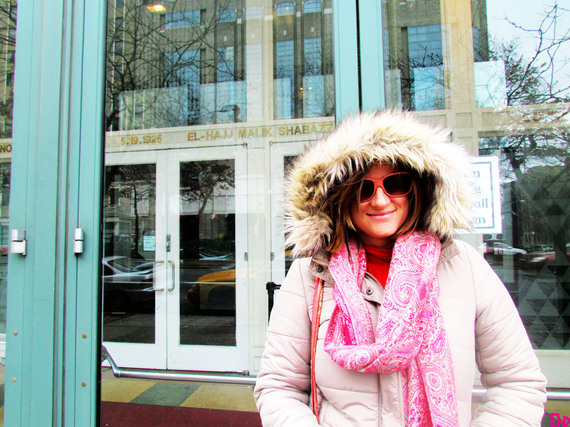 Following in the footsteps of Malcolm this year in Africa and the Middle East, I've learned that knowledge, humility, and humor make for great weapons in the fight for freedom. Though the struggle for justice can be messy and change slow to come, despair is best soothed and transformation inspired by far-reaching friendships forged in the fire. Any possibility for systemic change depends upon our commitment to challenging the structures of power that keep us divided at home and at war abroad--and our willingness to push beyond the boundaries of our self-knowledge and knowledge of one another.

In the words of Malcolm: "we need enlightenment. We need more light about each other. Light creates understanding, understanding creates love, love creates patience, and patience creates unity. Once we have more knowledge (light) about each other, we will stop condemning each other and a united front will be brought about." As the 50th anniversary of his assassination approaches, what better way to honor Malcolm's legacy than by seeking solace in solidarity and daring to unite in the light.