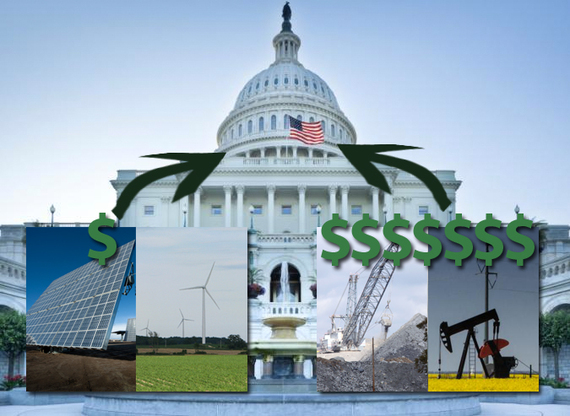 Is the alternative energy industry losing the influence-peddling war to fossil fuels?

Perhaps you caught the editorial in Sunday's New York Times taking "the Koch Brothers and their conservative allies" to task for "spending heavily to fight incentives for renewable energy." The editorial noted that such efforts are being spearheaded by the American Legislative Exchange Council a k a ALEC, a group that we’ve written about before and one that the Times describes as a

"conservative group that often dictates bills to Republican statehouses and receives financing from the utility industry and fossil-fuel producers, including the Kochs ... [who] see solar and wind energy as a long-term threat to their businesses."

As a result of their largess, the Koch brothers have reached the pinnacle of political infamy or glory, depending on your politics. Their pockets are unquestionably deep -- Forbes notes that David Koch, the richest resident of New York City, saw his net worth increase by $6 billion over the past year. His net worth and that of his brother Charles are each just north of $41 billion, according to Forbes, or in the $51 billion ballpark, according to Bloomberg News (whose Billionaire Index is not to be missed). Whatever the actual value, Charles and David Koch are apparently the "fifth- and sixth-richest people in the world" -- and the planet’s richest brothers.

And along with their deep pockets, the K Boys, as I affectionately like to call them, have the resolve to sway the political winds with some of their cash. Each year they throw what must be a mere pittance to them (but a fortune many times over for most of us) at people and groups (see also here) to advance any number of conservative political causes, including an agenda that supports and underwrites the fossil fuel industries while throwing roadblocks at alternative energy. And additional monies come from their corporation -- Wichita, Kansas-based Koch Industries -- which, as we now know courtesy of Citizens United, is the same as a person.

Of course the K Boys and their companies are but one of many, many individuals and corporations in the business of trying to use money to influence government energy policy. Some spend their funds on lobbyists, some on campaign contributions, and some on both. There are those like the Koch brothers who favor fossil fuels, but there are others who want to advance policies that favor alternative or renewable energy.

A Look at Energy Dollars at Work in Washington

Have you ever wondered what the relative mix is? How much money the various energy industries spend in Washington? How much goes to lobbying and how much to political campaigns? It turns out that such information is readily available at opensecrets.org. So I did a little poking around the site. Here's some of what I found out.

First of all, all of the energy sectors are active in both lobbying the federal government and in bankrolling political campaigns. But as you might expect, there are some significant differences.

Lobbying: Spending 7 to 1 in Favor of Fossil Fuels

In 2013, total dollars spent lobbying in Washington for:

Political Contributions: 30 to 1 in Favor of Fossil Fuels 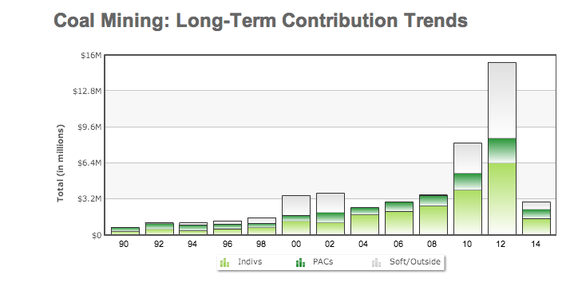 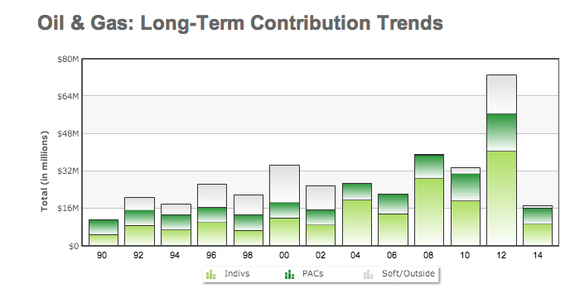 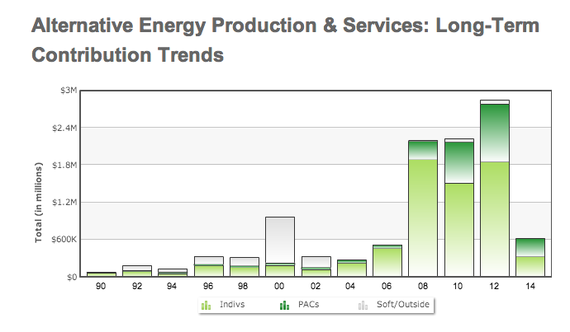 Total contributions during the 2011-12 campaign cycle:

In the case of oil and gas and coal, note the huge spike in political contributions in the 2012 election cycle. They were at least two times higher than they had ever been before -- leading to more than $40 million extra in the campaign coffers of by and large Republican candidates to influence the 2012 elections. What could have caused such a surge in campaign contributions? I would hazard that we are seeing the impact of the Citizens United decision on energy politics. Chalk one up for Republicans who choose to be friends of the fossil fuel industry.

The pattern is very different for the alternative energy sector. The largest spike in contributions is seen in the 2008 election cycle when contributions increased fourfold from the previous cycle, increasing from roughly $500,000 to $2.2 million.

Percentage-wise, it's a huge jump, but in total dollars not so much, especially when compared to the money flowing from fossil fuels. The post-Citizens United bump in the 2012 cycle for renewables is more like a hiccup -- increasing about 22 percent from $2.2 million in the 2010 cycle to $2.8 million in the 2012 cycle. And given the split between Democrats and Republicans, this increase in contributions, small as it was, was largely party neutral.

Alternative Energy Not out, Tho

If money is the name of the game, if dollars dictate the goings-on in DC, then the prognosis for alternative and renewable fuels looks bleak. The alternative energy industry is being buried under a mountain of greenbacks for lobbying and campaigns from the fossil fuel industry. If there were a penalty for "piling on" on Capitol Hill, the whistle would have been blown many times over.

But sometimes a small running back who's got the quicks and the moves can weave his way under and around and find his way into the end zone. And it's just possible that that will be the case for alternative energy -- it's hard to beat clean, abundant energy.

And that is where there's some good news. On the state front, take a look at Kansas. Despite a well-financed campaign to get the State Legislature to remove renewable energy mandates from the books, the effort has so far failed. A look at the bigger U.S. picture shows non-hydropower renewable electricity generation in the United States doubled between 2008 and 2013, and solar-energy generating capacity increased five times since 2010. Non-hydro renewable energy still makes up a very, very small part (6 percent) of our total energy portfolio though, so I'd characterize the march toward a low-carbon economy as more of a creep than a stampede.

But even so, it's apparently got the K Boys and their compatriots worried enough to pour a small fortune into stopping the creep. Could be, their dollars won't be able to cover all the holes that a fossil-fuel energy economy presents and low-carbon alternatives will pop right through.

Keep in mind that alternative doesn't necessarily mean renewable. Some of the money attributed to alternative energy looks a lot like fossil fuels. For example, Clean Energy Fuels Corp, owned by T. Boone Pickens, is one of the largest spenders in the OpenSecrets.org alternative energy sector. What is its business? Building infrastructure for natural gas-fueled cars.↩

The increase in the 2008 cycle is attributed to the growth of clean energy companies and their efforts to secure market share via activities like pushing for a national renewable electricity standard and the extension of tax credits.↩