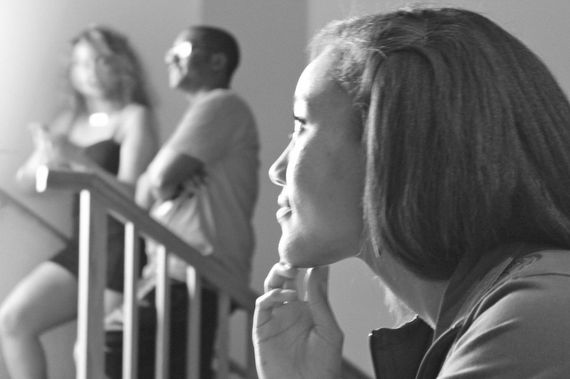 I made a big transition between graduating from college and going to graduate school this year. The switch to more studying wasn't the big change but more so my decision to study across the pond in the UK to pursue my masters at the University of Cambridge. The week before moving here I watched the Giants game with friends and coworkers at AT&T Park and was asked by a stranger what I would be studying while abroad. I answered excitedly, as I always do: "Gender Studies," and she responded, with a confused look on her face: "What does that mean?" I had to keep myself from being rude and saying what was really on my mind: "Have you not heard of gender?" or "Why are you even talking to me?" Because I knew she meant to ask something more like "Why will you be studying that?" "Why is that important?" "What will you do this degree?"

I've become accustomed to these questions by now, as a lot of my decisions have been... unconventional or what some might call strange. For instance, my undergraduate major was in Medical Anthropology (by the way, Anthropology has been deemed the worst degree to find a job several times by several sources, talk about a lack of "return on investment"). And while many of my other blogs are focused on the importance of gender, race and cultural studies, since I can go on and on for days about this... For now I want to talk about finding your own path/dream and steps for following it despite what I consider stupid, annoying and uninformed questions.

1. Be motivated by people's ignorance and lack of knowledge. Rather than being dissuaded from what I want to do and questioning myself when others question my decisions, I instead laugh to myself and say: "LOL. You're all the more reason why I will continue on my path. If you don't see the importance of this, you are a reminder of what the world is lacking and what I have to offer it." (As you are probably starting to notice, conversations go a lot differently in my mind then they do in reality sometimes). Fortunately, people unknowingly remind me of my value in the world each and every day and give me lots (like tons) of reasons to chuckle and keep pushing.

2. Operate as if you were the only thing in your way. I often see friends and family keep themselves from doing something by blaming another person, thing, circumstance for keeping them from their dreams. I'm guilty of this myself. For example, I used to say: "I want to start my own blog" and then say "I just don't have time to do this because I'm so busy and so tired." Who's too busy and too tired for their own dreams?? That's absolutely ridiculous! But the reality is, despite the circumstance, you can make your plan and follow your path if you trust yourself enough to do so. Does this make things easier? No. Does it make things more tangible? Yes. Does this become easier with certain privileges? Yes. Does it always require them? I don't think so. Plus, when you think of things this way, you don't really need anybody else's approval. It can be very liberating.

3. If you have a dream, follow it now rather than later. Don't delay yourself. Ask, what your dreams are and what are you doing right now to achieve them. If you can't think of anything you're currently doing, or if your automatic response is to say "I'm going to do _______ soon," you should fix this. Imagine, had you started a year ago, you'd be a year closer to your goals. So what if you start today, instead of tomorrow or next week?

4. Finally, just because it hasn't been done before, doesn't mean it cannot be done. This sounds like a very obvious one, but think to yourself how many times you didn't try something or even allow yourself to imagine doing something, instead saying, "I can't do that," because you didn't have a precedent. Or even worse, you say, "That's just not how things are done." Remember, a whole lot of things have been done the wrong way in the history of the universe and a lot of things are being done the wrong way right now. Just think, there was a time when ice cream wasn't a thing... When emails took hours to send. When women weren't allowed to vote, and when mixed marriages were illegal. The only way you could think things don't need changing now would be if...nope, I can't think of any reason why this would be the case.

To close, one of my Anthropology professors from college always tells this story to her students: When she was an undergad she was very interested in studying either sustainability, computer engineering, or some kind of combination of the two. Her advisors told her that these fields would be unsuccessful in the future, that she would have limited opportunities, and that she wouldn't make a lasting impact. She took their advice and followed a different road. Even though she is happy with her path, as life can take us all in several directions, her advisors were obviously wrong. Very very wrong... it's kind of hilarious how wrong they were. So if you see something in the world that many others don't, keep at it and reveal it to them. Get out of your own way, follow it now, and be the first to do/change something. For me, at least for right now, this meant moving and continuing my journey across the pond.

Writer and teacher based in the Bay Area. Stanford University BA, University of Cambridge MPhil - Specializes in Race and Gender.