It’s Friday night, you have no plans and you’re taking a break from binge-watching Netflix to scroll through your Instagram feed when you see it: a photo of your friends hanging out without you.

Why didn’t anyone invite you? Why does it look like they’re having so much fun? What are they doing later? Should you text them? What if no one responds?

FOMO, or “fear of missing out,” is a form of anxiety that causes people to feel like they’re missing out on something—a party, outing or social event. The Oxford English Dictionary defines it as, “Anxiety that an exciting or interesting event may currently be happening elsewhere, often aroused by posts seen on a social media website.”

And yes, the acronym was added to the publication last year. But just how serious is FOMO?

“I absolutely think that this is a significant issue for adolescents,” said Jonathan Pochyly, an adolescent psychiatrist at Lurie Children’s Hospital. “The concept of (FOMO) is something that I am familiar with and talk with kids about, no question about it.”

According to a study by JWTIntelligence, 47 percent of teen millennials (13-17 years old) feel uneasy or nervous when they learn friends or peers are doing something they’re not. Forty-one percent said they spread themselves too thin to avoid FOMO. Sixty-five percent said it’s important to keep up a certain image on social media outlets like Facebook and Twitter.

“FOMO doesn’t make me feel good because I see everyone else doing stuff and most of the time it’s my friends, and I’m just sitting at home doing nothing,” said Jones freshman Emmy Brewer.

The anxiety doesn’t just strike on the weekends. Patricia McAvoy, a social studies teacher at Mather, said the constant need to check social media is alarming—even in the classroom.

“Social media is an issue in class as (students) are constantly checking their phones for updates,” McAvoy said. “They feel a one hour class without being in contact is an issue, which I find a little over the top.”

Pochyly said the ease of today’s technology is both beneficial and hurtful to teens’ feelings.

“(Technology) is one of the things that makes life special for adolescents these days,” he explained. “There’s a lot of focus on what everyone else is doing. It became a trend and now that’s the thing to do, so there’s pressure to maintain that and keep up with it.”

As social media feeds constantly update with statuses about where friends are, what they’re doing and photos of them doing it, it’s easier than ever to feel left out.

But what about those rare instances when social media goes quiet—when even the most savvy Facebook users can’t figure out what their friends are doing? There’s a word for that, too: MOMO, or “mystery of missing out.”

MOMO is the hunch or feeling that you’re missing out on something, but you just don’t know what it is. Let’s say your best friend is “busy” on Friday night but doesn’t post a single photo, update or check-in on social media. There’s no hard proof that you missed out on anything, but the feeling of not knowing could cause anxiety.

“I constantly think that my friends are doing something without me when they don’t respond to a text or when I surf the Internet and they haven’t posted anything in a while,” said Riverside Brookfield senior Jake Lucas. “It’s a ridiculous feeling that I know I shouldn’t be having, but it still happens nonetheless.”

To combat FOMO and MOMO, Brewer said she uses a direct approach. If she starts feeling left out, she takes matters into her own hands.

“I usually just call people and talk to them,” she said. “I’d be upset for a bit, but then I realize that I should be reaching out to them.”

Oak Park and River Forest senior James Cullinane said he fights off FOMO by living in the now.

“If I’m hanging out with my friends around a bonfire, or even just sitting at home on my couch, I think it’s best to stay off social media and focus on what you’re doing in the moment,” Cullinane said.

There’s no doubt that FOMO and MOMO will continue to affect teens, but Pochyly said he believes these feelings are simply side effects of growing up.

“These types of interactions with people are, by their very nature, a function of kids being more independent, seeking out connections with other people, moving away from just being a child in a home, and moving toward adulthood,” he explained.

In other words, sometimes growing up means not being invited to the party of the year or not being allowed to go to the sleepover on Saturday.

“You have to have the mentality that who you are with and what you are currently doing is the most important thing to you at the moment,” Cullinane said. “Otherwise, you’re putting yourself in a state of mind you really don’t want to be in.”

FOMO (Fear of Missing Out) Seeing photos or posts on social media that make you feel like you’re missing out on fun.

MOMO (Mystery of Missing Out) Wondering what you’re missing out on when no one’s shared any photos or posts on social media. 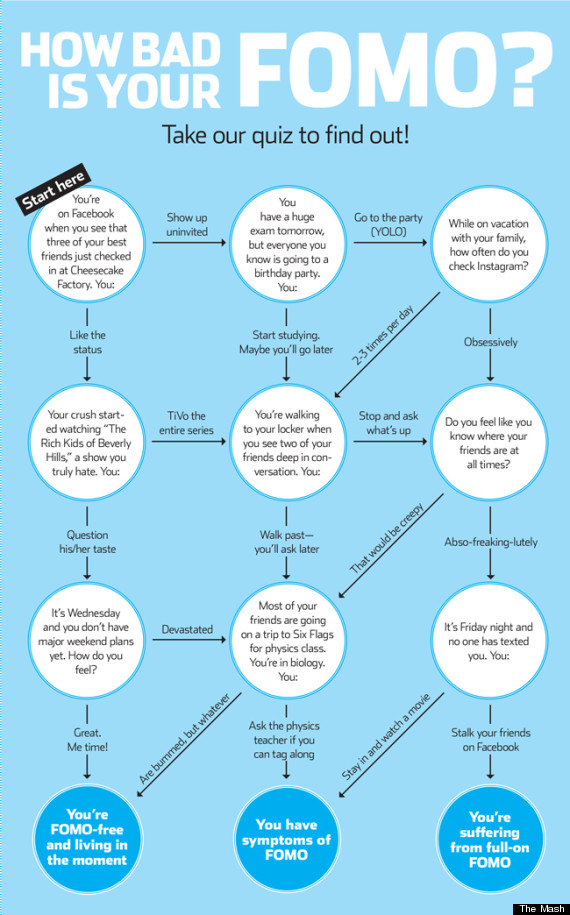 Why FOMO and MOMO Are Making You Feel Friendless
Best Teen TED Talks
1 / 10
Tavi Gevinson
<a href="https://www.huffpost.com/entry/tavi-gevinson-fashion-week-bow_n_2753370" target="_blank">Tavi Gevinson</a> -- author and editor of Rookie Magazine who got her start as a fashion blogger -- discusses how there really aren't any set of rules to feminism and growing up.