Peter Thum saw preteens carrying rifles while he was in Kenya and Tanzania. Disturbed by the sight, the social entrepreneur decided to become a catalyst for change.

And to use jewelry to do it.

Thum is a co-founder of Fonderie 47 -- a brand of watches, bracelets, rings and other accessories helping rid Central Africa of deadly weaponry. The brand's items are in part created with melted down and recycled metal from AK-47s seized through disarmament efforts in the region, according to NPR.

Although not everyone may be able to purchase Fonderie 47's high-end items, a portion of each sale helps support Mines Advisory Group -- an international organization that removes and destroys weapons that remain after conflict. For example, one $195,000 watch ensures the demolition of 1,000 weapons, according to Fast Track.

Thum is not new to the humanitarianism scene. About 13 years ago, he founded Ethos Water -- a bottled water brand that donated a share of its profits toward sanitation and clean water efforts in the developing world. Ethos Water was sold to Starbucks in 2005.

Thum's eye-opening experience in Africa occurred while the entrepreneur was visiting safe water projects in the region.

According to Mines Advisory Group, the Cold War created arms supply routes across the globe. As a result, many regions around the world are now home to surplus amounts of weaponry. The United Nations said illegal weapons in Central Africa increase cross-border crime and complicate international relations in the region, Voice of America reported.

"This is a very tangible action," Thum told NPR of supporters buying jewelry to help the cause. "It's not a peace conference. Let's take a device that makes people dead and get rid of it."

Because of Fonderie 47, more than 40,000 weapons have been confiscated through the Mines Advisory Group, Fast Track reported, with the majority being from Democratic Republic of the Congo.

Thum's success spurred him to bring his international idea home through Liberty United -- a jewelry company where "every purchase helps stop gun violence in America." The company, launched last year, uses jewelry sales to support local efforts curbing gun violence -- such as the City of Philadelphia Mural Arts Program, CeaseFirePA, and the Newburgh Armory Unity Center -- according to Fast Track.

On Oct. 16, Liberty United announced a partnership with Cook County, Illinois -- which encompasses Chicago -- allowing the company to repurpose illegal guns collected by law enforcement. A portion of profits will boost area nonprofit efforts fighting gun violence, according to a press release.

"Our gun violence epidemic is destroying communities and setting back an entire generation of young Chicagoans," Cook County Sheriff Thomas J. Dart said. "With this partnership, we're taking guns that would otherwise be incinerated and turning them into something beautiful, while benefiting a local organization working on the front lines to stop the bloodshed."

This Jewelry Brand Has Destroyed 40,000 Illegal Weapons Through Its Charitable Giving
Jewelry Made From Guns, Bullets From Liberty United 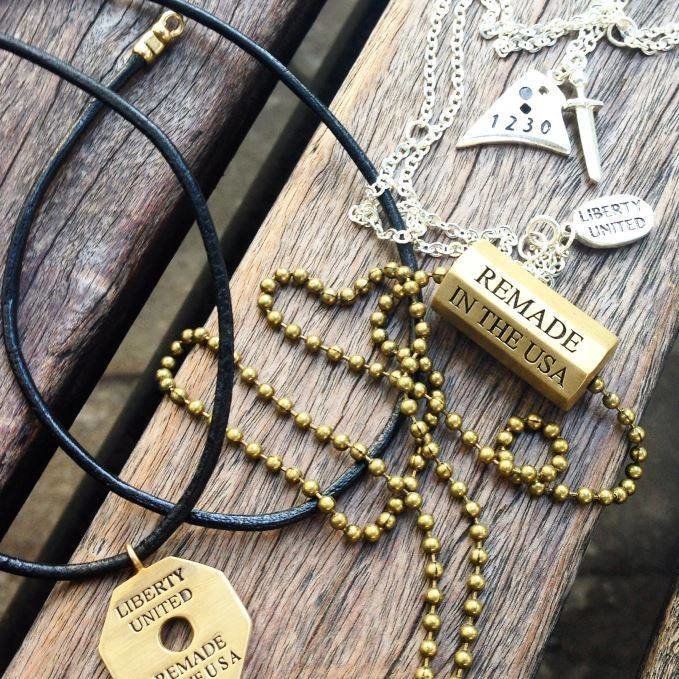