As the world economy collapses, the lifeline to already-impoverished Haiti has run thin.

One third of Haiti's economy flows through remittances -- through companies such as Western Union and Moneygram -- from overseas family members sending cash home.

Banks and micro-finance institutions such as Fonkoze also play a role. This amounts to 90% of Haiti's federal budget and three times the size of its exports.

A recent video conference linking Haitians in Port-au-Prince and across the U.S. -- the first such attempt to unite the Haitian Diaspora with sound and image -- discussed ways in which the community could work within the U.S. to improve the financial literacy of Haitian immigrants, many of whom contributed significantly to the US$1.8 billion sent back home in 2008.

With greater financial literacy, Haitian immigrants can be empowered to both increase and protect their assets, while identifying more cost effective and productive ways to send money home -- spurring the growth of Haiti's economy. 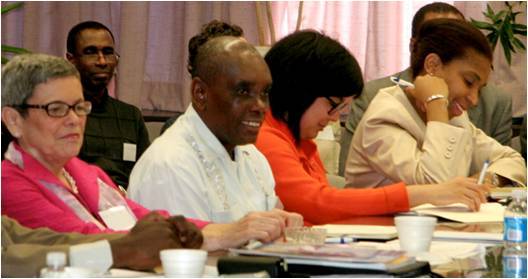 The conference was entitled "Dollars and Diaspora: A Haitian Community Financial Literacy Dialogue," and linked Haitians in New York, Miami, and Boston with the Ministry of Haitians Living Abroad in Port-au-Prince.

Bringing together the U.S.-based Haitian community with their counterparts in Haiti to tackle the issue of financial literacy, the conference challenged both communities to consider how helping Haitians in the U.S. to build their assets and become more savvy users of available financial products and services could contribute to the growth and development of Haiti's economy through the existing remittance channel.

"Immigrants arriving in the United States are faced with more choices" said Jennifer Ching, Director of New York's Office of Appleseed. Appleseed is a non-profit network of public interest justice centers in the U.S. that aim to overcome barriers to financial, educational and legal opportunities here, "but with more choices, they need better education to understand these choices." 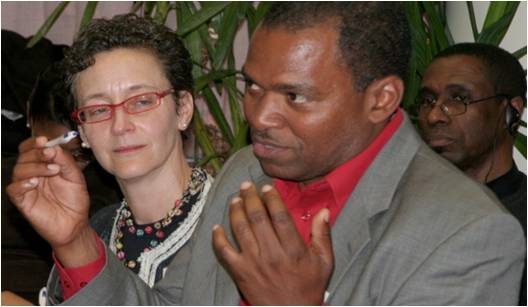 Steve Higgins from MoneyGram and Leslie Ehrlich from the Center for Consumer Debtor Education participated.

Young Haitian-Americans were present, including Jimmy Toussaint, a candidate for New York City Council. Such youth represent the future of the Haitian-American community and its potential to bring together new generations of Haitians to work toward a better Haiti.

Other participants were important leaders of the Haitian-American business community, including Jackson Rockingster, leader of the Haitian American Business Network, a Chamber of Commerce. These leaders stressed that Haitians here were deeply connected to their roots in Haiti and share a goal of helping their country prosper.

There have been limited vehicles available for the Diaspora, the leaders explained, that bring them together -- let alone that allow Haitians abroad to invest in their country's economic growth and development.

Hosted by Haiti's largest micro-finance agency, Fonkoze, with financing from the Inter-American Development Bank (IDB) and the International Fund for Agricultural Development (IFAD), the conference was lead by Fonkoze's team.

Father Joseph founded Fonkoze in 1994. He also founded the University of Fondwa, an educational institution committed to sustainable and integrated development in rural Haiti. He received his Masters of Divinity degree from Catholic Theological Union in Chicago.

Anne Hastings has directed Fonkoze -- "Haiti's alternative bank for the organized poor" -- since 1996. Under her leadership, the institution has grown from two volunteers in one location to over 750 full time staff in 40 branches, serving 190,000 clients -- including 55,000 borrowers.

Katleen Felix, of Haitian descent from Quebec, holds a Masters degree in financial and international business from HEC Montreal, the business school of the University of Montreal. She serves as Fonkoze's liaison with over 300 Haitian-American groups in North America.

Anne Hastings was an enormous help to me when I was founding OI Haiti in Jacmel. I met Father Joseph about five years ago as he visited New York, and Katleen has been a friend for several years. Good people, all. 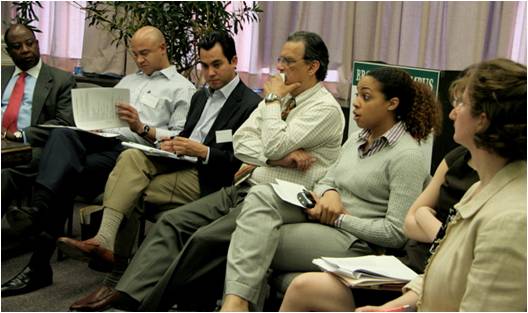 Today, Fonkoze is the largest micro-finance institution offering a full range of financial services to the rural-based poor in Haiti, committed to the economic and social improvement of the people of Haiti and to the reduction of poverty in the country.

Over the past two years, and with the support of the IDB and IFAD, Fonkoze has been exploring mechanisms to strengthen the ties between the Haitian Diaspora and their country, developing low-cost and convenient mechanisms to send money home; offering financial education and literacy; and creating spaces such as this conference, that connect the Diaspora to community organizations in Haiti.

"The Diaspora is the driving force for the economic development of the country," Father Joseph told me. "But in order to reach that objective, overseas Haitians need to be organized locally, state-wide, and nationally.

He added, "All of the Haitian organizations in New York must unite -- in every North America city from Miami to Montreal -- creating a network. This video conference is a step towards that."

Father Joseph told the participants that his goals were two-fold: to draft legislation for the Haitian government to allow for dual citizenship, and to include a $1 surcharge with all money transfers to Haiti to provide for public services and investment in Haiti.

Anne Hastings asked the group assembled, "How can we link the Diaspora with investment opportunities in Haiti?" This seemed to be the most important question raised by the conference.

Because the images of Haiti are often so desperate, many Americans assume Haitian-Americans too are destitute. Facts speak otherwise:

According to the World Bank, 82% of Haitians with a college education have left the country. Another study finds 88% of skilled workers have emigrated. It is estimated that 37% of Haitians in the U.S. have a university degree.

There are presently about 400,000 Haitians living in the New York area, with about the same number living in South Florida, and 100,000 in Boston. According to the 2000 U.S. Census, about 58% of Haitians work in a professional capacity.

An estimated one third of black doctors in New York State are Haitians and there are around 1,100 Haitian doctors in the New York Metropolitan area alone. There are over 2,000 Haitian-American engineers working for the MTA in New York City alone - more than the number of engineers in Port-au-Prince.

Almost 40% of Haitian-Americans own their own homes.

With an unprecedented four hurricanes devastating Haiti last fall, the country is more in need of assistance than at any time in recent memory. Fonkoze highlighted that many of their loan clients who were struck by this devastation received loan forgiveness from the institution, through the help of external funders.

This insurance protects clients so that upon a clients' death, their debt is not passed onto their family members. It also provides a cash payout to their beneficiaries much like traditional term life insurance. The next challenge will be to sell "micro-insurance" that offers additional coverage such as funeral and weather insurance to clients.

Anne Hastings summarized the conference by saying, "We have demonstrated that the Diaspora can be united electronically -- we achieved this here for the first time."

She noted that while the objective of the conference was to raise awareness of financial literacy needs of the Diaspora, it went beyond those objectives, showing a common interest and mission among the participants to contribute to Haiti's economic development.

All the sponsors present at the conference are committed to Corporate Social Responsibility. Each attempts to provide products and services that benefit the Haitian Diaspora while benefiting their companies.

A YouTube video sharing how one Haitian woman's life has been changed through Fonkoze's microcredit program, may be seen here. A slideshow of the conference has been posted on flickr.