In my last post I identified the single most important enduring nutrition principle: Eat mainly raw fruits and vegetables.[1] This should be no shocker; it has been the central message of academic nutritionists for more than 50 years. But what is often overlooked is the fact that raw fruits and vegetables only serve as the nutritional gold standard when they are fresh and whole. 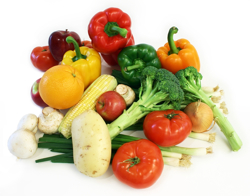 Because organic matter degrades over time, our most nutrient-rich foods are our freshest. More than half of nutrients can be lost within the first week after harvest. Processing foods, even minimally, further increases the rate at which nutrients degrade.

Unfortunately, the demands of our society require food to last. It needs to be able to travel long distances from farms to cities. Food needs to have the ability to be stored for days when we can't shop, and for emergencies when it might be scarce. And, lastly, businesses need food to last so that logistical errors, slow sales, or power outages don't cause major financial losses.

For these reasons and many more, our food system prioritizes shelf life over nutrition. The trouble is, old food doesn't taste as good as fresh food. Modern food science has discovered that by using chemical additives we can now make old food appear almost as good. As a result, additives are now used in nearly every packaged food. This trend lies at the heart of our health problems.

There are now more than 3,000 registered additives in food products in the United States alone. These increase shelf life, fight bacteria, offset color loss, enhance flavor, improve "mouth-feel," control acidity, retain moisture, maintain firmness, and so on. For the most part, each additive creates a single effect, so the most "vibrant" products use many additives together in chemical libraries that enhance every possible quality and consumer desire.

The question is, are additives safe to eat? Unfortunately, our current food system requires you, the consumer, to decide. Federal law allows an additive to be used in food until the FDA wins a strong legal case against it. This is nearly impossible because there are so many confounding factors involved in nutrition science. Even with widely researched additives, debates can carry on for more than 50 years without resolution.

Additives Have A Bad Track Record

Historically, we have reason to be cautious about additives. Toxins have accidentally been used as additives over and over, for thousands of years. The Romans used lead acetate to preserve and sweeten wine, causing widespread lead poisoning. However, this knowledge didn't stop us from using lead chromate (labeled as chrome yellow) to color custard through the 19th century. Thinking we knew better, in the 20th century we used toxic compounds containing arsenic (in Scheele's green) and benzene (in butter yellow) to color food instead.

Despite advances in chemistry and food science, it remains extremely challenging to determine the safety of additives. It's difficult to model even a fraction of the potential reactions that can occur, and we continue to make mistakes. Despite being used successfully to treat people with anemia, when cobalt chloride was added to beer as a foam stabilizer, it caused degeneration of heart tissue in drinkers and had to be taken off the market.

When many additives are used at once, it's nearly impossible to predict all of the potential health effects. Despite use for over 100 years, it wasn't until 2007 that we discovered that Yellow #5 (tartrazine) had been reacting dangerously with a common partner preservative. The potential interactions of additives are just too numerous to keep track of. For instance, the toxicity of benzene, a potent carcinogen and chemical solvent, is well known. However, the reactions between Vitamin C (ascorbic acid) and benzoic acids were overlooked, resulting in benzene formation in flavored waters and soft drinks.

Additives Are Indictors Of Less-Healthy Foods

Additives are so widespread today that consumers often trust them from familiarity alone. Don't be fooled. Food additives are largely unregulated, experimental chemicals that have a poor track record of health safety. The few additives that have undergone review have raised flags with academic nutritionists, public interest groups, and natural grocers.

Whether or not specific additives are proven to be dangerous, additives are one of the best indicators of less healthy food. Additives fool your senses into thinking older, nutritionally-inferior food looks and tastes like fresh food. You will eat healthier when you avoid foods that contain additives. The next part in this series, "Packaged Food is Mystery Food Part II: Contaminants," will outline how foods that use additives also harbor greater amounts of concealed food contaminants.

One of the best ways to avoid additives is to follow the enduring lesson of nutrition: eat mainly raw fruits and vegetables. Otherwise, choose perishable foods without additives -- the shorter the shelf life, the better. For shelf stable foods, choose ones that utilize simple, ancient preservation methods -- like drying and freezing. And, as you might guess, consume mystery foods sparingly.

[1] To clear up any confusion, "mainly" in this context means "greater than 50 percent." My research indicates that making sure you follow this rule is a lot more important than what you choose to eat the rest of the time.