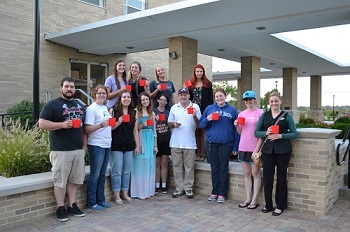 Last month I spoke to a unique class at the College of Mount St. Joseph in Ohio, one dedicated to ending hunger and poverty through the UN Development Goals. The class had attended Ban Ki-moon's Youth Day presentation at the General Assembly.

As I prepared for the class a surprise came to me via twitter! It was a letter from a child in Mali, a country in Africa that has suffered through conflict and drought. The UN World Food Programme (WFP), which is providing school meals in Mali, forwarded a translation of the letter:


Hello papa et maman. After 11 months of occupation in North Mali by armed bandits we're today on the path to school. Our parents are poor and tired.

Thank you WFP who gave us food so we could work hard in school. We always count on God and you. With WFP it's okay. The school in Barize thanks you.

These school meals take on even more urgency in Mali with recent findings that show three out of every four households in the northern part of the country suffer from hunger. Both WFP and Catholic Relief Services are providing food for schoolchildren in Mali. Funding though is always an issue.

Food and education for children is something that clearly does not get enough attention, yet it's one of our most important pathways to peace.

Ban Ki-moon told the Youth Day audience in August about his experiences growing up in war-time Korea. When it rained there were no classes because those were held outdoors. The school buildings had been destroyed during the fighting.

The Secretary General said the Korean children were hungry for food, but also hungry for knowledge. "It's not only bread and butter" he said, "you need to have knowledge and education." Getting children food and education is a top priority worldwide.

What better example than South Korea? During and after the war food was provided to children through the United Nations, CARE and other organizations. The U.S. Food for Peace program was founded after the Korean War. Millions of Korean children received school meals through Food for Peace.

History provides us even more advice. It was October 1st, 1947 when Secretary of State George Marshall said, "Hunger and insecurity are the worst enemies of peace." He knew that peace after World War II stood no chance unless the enemy of hunger was defeated. Europe's recovery was only possible under a foundation of food. School meals were a huge part of this recovery. That is a lesson we need to remember today.

It was a great opportunity to speak to the UN Development Goals class about food and education for children. Everyone in the class even received a Red Cup which is the World Food Programme's symbol of school meals.

The school meals mean a lot to every country, from the United States to Yemen. The United States has its own national school lunch program, building upon years of effort. Now the U.S. Congress ironically is trying to undo that by eliminating some free school meals as part of its food stamp cuts.

That is why it's so important that people advocate for what should be a basic right for children: school meals. The UN Development Goals class, with its emphasis on service learning, is well-equipped to carry on this message.

Next year Yemen will be starting their own national school lunch program with the help of WFP, a potential major turning point for a country mired in conflict and poverty.

Erin Koepke of the World Food Program USA said to me, "I love how there is a class dedicated to the Millennium Development Goals. If only all colleges and universities had a similar class." I agree.