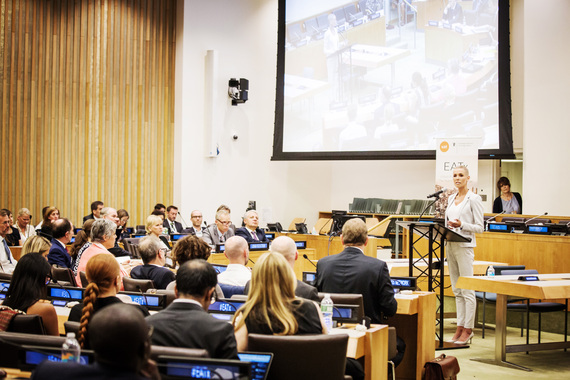 Four years ago, before I founded EAT, I was a part of the Norwegian government-appointed expert panel for Sustainable City Development. We discussed urban planning, infrastructure and transportation. And we gave advice on active transportation, green lungs and energy positive building. But we all overlooked the haunting challenges and huge possibilities sitting on a plate right in front of us: food!

Why food?
Our global food system is far beyond its expiration date. What we eat, and how it is produced, is driving some of the greatest challenges of our time. Both for people and planet. When we add up those suffering from under- and overnutrition as well as micronutrient deficiencies, almost half the world´s population can be classified as malnourished. While nearly 800 million still are going hungry, more than 2 billions are now overweight or obese, and unhealthy diets has become the biggest cause of early death - bigger than smoking. In the US, today´s children are expected to have a shorter life span than their parents, caused by poor diet and obesity-related diseases.

On top of this, food is also driving an environmental crisis: The global food system is the single most important contributor to climate change, accounting for up to one third of greenhouse gas emissions, as well as being a significant driver of deforestation, loss of biodiversity and the depletion of marine ecosystems.

Why cities?
Rapid and often unplanned city growth and urbanization is amplifying these challenges. Never before have so many people been dependent upon so few to produce their food. All over the world, people are leaving the countryside where food is grown to live out their lives in urban areas where food is eaten out of a can, a plastic bag or a Styrofoam box. Today, more than half the world's population live in cities. By 2050, 7 out of the expected 10 billion of us will live in urban areas.

Cities are responsible for more than 70 percent of global energy-related carbon dioxide emissions, and hence, represent the single greatest opportunity for tackling climate

And most of the food is consumed in the city. Urban city dwellers are increasingly surrounded and tempted by cheap calories in excess. On every corner, at every hour, there are fast food restaurants and food stands serving cheap and morbidly large portions of meat, sugary drinks and ultra-processed junk.

6.5 million American children are growing up in so-called "food deserts", where fresh fruits and vegetables are not just out of season, but out of stock, out of sight and out of mind completely. Our genetics haven't changed over these past decades, but the environment we live in has! Cities have become "obesogenic environments", with cars, escalators and elevators limiting daily physical activity to a minimum. Consequently, people end up making unhealthy and unsustainable choices and become sick and overweight almost by default.

Without careful planning, cities will struggle to sustainably feed and accommodate an expanding population in a healthy way. And without cities solving its pressing health and environmental challenges, the entire global sustainable development agenda will be threatened.

Three reasons to smile - and get to work
Current statistics may seem gloomy for multiple reasons. But there are also reasons to be optimistic (and start rolling up your sleeves). Here are three.

1: One meal - several goals
First, food is a great way to multitask for health and sustainability. Evidence show that certain food choices greatly benefit both our health and the environment. Eating more plants, less meat and dairy products and less ultraprocessed food, will not only make people healthier, but help cut emissions. Getting food right could be our fast track to reaching several of the Sustainable Development Goals. Instead of singling out individual challenges, it's time we start searching for synergies!

2: Where nations linger, cities act
Mayors, not presidents or prime ministers, are taking the lead on both public health and sustainability. Where nations see obstacles, cities seize opportunities. Cities attract talents and investments, change makers and influencers. And a city council is just small enough to connect different experts, leaders and agendas, instead of creating silos. All of this makes cities great platforms to test, learn, adapt and spread best practice that can later be scaled up to both national and international levels.

Leading up to the Paris Climate Conference (COP 21) in 2015, mayors from all over the world united to push for a global agreement. Among them, they shared not only ambitious targets, but also impressive transitions.

3: New urban food scene on the rise
Members of the C40 Network and the Nordic Council of Ministers have partnered with EAT to create Urban Food System Networks that help accelerate healthier and sustainable food systems solutions at a local level. The cities involved will not only place food on top of their agenda, but start creating a fully integrated and holistic food policy. When cities like New York, Milan, Accra, Wuhan and Curitiba change their default from fat and filthy to healthy, hearty and happy, the rest of the world will be anxious to copy their recipe.

Looking back, it is overwhelming how much our diets, eating habits and the food available to us has changed in just one generation. Going forward, we must envision transforming our food scene once again for our children.

The UN has named this coming period the "Decade of Action on Nutrition". Let's make sure that decade is celebrated in your city too. Cities have the autonomy, the organizations, the money, the ingenuity and the chefs to take a lead and create a menu for a healthy and sustainable future. Everyone has a vote and a voice. We just have to open our eyes to what may be right in front of us: a fresh, well-balanced meal for people and planet and 17 Global Goals within reach!

This post is part of a series produced by The Huffington Post and the EAT Foundation, in conjunction with the high-level side event, "Urban Food Systems: The Nutrition Challenge," during the 71st United Nations General Assembly in New York. The EATx at UNGA is a collaboration with the Norwegian Ministry of Foreign Affairs. Read all the blogg posts in the series here. #EATx #eatforum