Five years ago, the Food Chain Workers Alliance was founded as a national coalition of unions, workers centers, and non-profit organizations to work towards a sustainable food system that respects the rights of workers all along the food chain - production, processing, distribution, retail and food service. One of the reasons the nine founding organizations came together to create the Alliance was that they were witnessing the growth of the sustainable food movement around the country, but they didn't see much attention paid to workers in the food system. 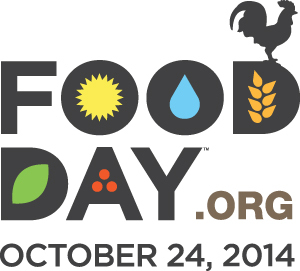 We set about to change that and work with the food movement for positive social change.

Now in 2014, we are celebrating Food Day in the U.S. on October 24, and one of the areas of focus for this Food Day is justice for food and farm workers. We've come a long way!

"Even five years ago, the sustainability conversation focused almost exclusively on animal welfare and agriculture; those things are obviously crucial, but you don't need to know anything about food to realize how backwards it is to be more concerned with the provenance of a tomato than the treatment of the worker that picked it. Not only is labor now firmly a part of the equation, but there is important work being done by food workers, NGOs, unions, and others surrounding the minimum wage, paid sick leave, and other key labor policies both nationally and locally."

So on Food Day 2014, we're excited to be co-sponsoring an amazing Food Justice Panel & Fair Food Fair at the National Press Club in Washington, D.C. with the national Food Day campaign. And we have an amazing line-up of speakers! 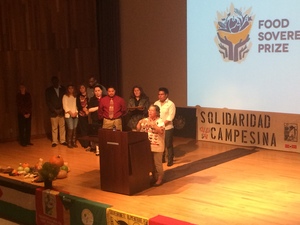 One of our panelists is Rosalinda Guillen, the executive director of Community to Community Development (C2C) in Bellingham, Washington. C2C is one of the two winners of this year's World Food Sovereignty Prize. C2C works with migrant farmworker communities in Washington State whose families are indigenous to Mexico with deep agricultural traditions. C2C was chosen as one of the winners because of its work to reclaim the human right to food through food sovereignty, the democratic recognition of full human rights, and for their commitment to the leadership of those most impacted by the policies that produce hunger. C2C is currently supporting farmworkers at Sakuma Brother Berry Farms, a supplier to Driscoll and Haagen Dazs, who have formed their own union. C2C is also a fellow founding member of the US Food Sovereignty Alliance, along with the Food Chain Workers Alliance (FCWA).

Our other great panelists include:
•Barry Estabrook, author of Tomatoland and a producer of the forthcoming farmworker documentary Food Chains about FCWA member group the Coalition of Immokalee Workers and its Campaign for Fair Food
•Jose Oliva, the FCWA's associate director and long-time worker and immigrant rights organizer
•Ricardo Salvador, director of the Food and Environment program at the Union of Concerned Scientists

And our moderator is Michael Jacobson, Food Day Founder and Executive Director of the Center for Science in the Public Interest.

If you're in D.C. on October 24, join us at the National Press Club. If not, find a Food Day activity in your area. And get ready for our 3rd Annual International Food Workers Week, November 23-29, 2014!