A growing percentage of Americans are struggling to put food on the table, but that's not stopping the House of Representatives from considering drastic cuts to the nation's food stamp program.

According to a new Gallup survey, 20 percent of Americans said in August that they have “lacked enough money to buy the food that they or their families needed during the past year.”

That figure is the highest percentage since late 2011, and it’s also closing in on the 20.4 percent peak reached in November 2008, at the height of the financial crisis: 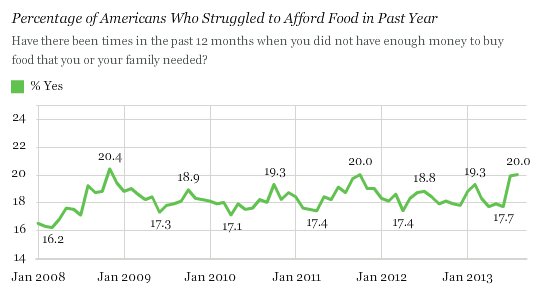 The negative trend is reflected as well by Gallup’s “Basic Access Index,” a measure of well-being that includes factors like housing and health care alongside food insecurity. That index is currently flirting with an all-time low:

The U.S. Department of Agriculture separately reported in September that their calculation of food insecurity was unchanged between 2011 and 2012 at 15 percent.

Meanwhile, the House of Representatives next week plans to vote on cutting the country’s food stamp program -- technically known as the Supplemental Nutrition Assistance Program (SNAP) -- by around 5 percent, or around $40 billion over 10 years.

Such a cut would take away food assistance from up to 6 million low-income Americans, according to an August calculation by the left-leaning Center on Budget and Policy Priorities.

But as The Huffington Post's Arthur Delaney noted this week, hard times are coming for SNAP-using families regardless of whether the House bill passes:

Any bill passed by the House will have to be reconciled with the Senate's farm bill, which cut SNAP by a relatively modest $4 billion over 10 years. Regardless of the legislative outcome, the average family of four enrolled in SNAP will see its monthly benefit decline by $36 in November, thanks to the expiration of a boost to benefits from the 2009 stimulus bill, as there is little support for legislation to avert the upcoming drop.

Enrollment in food stamps rose 70 percent between 2007 and 2011, according to the Wall Street Journal. Today, roughly one-sixth of the nation uses the program in some form.