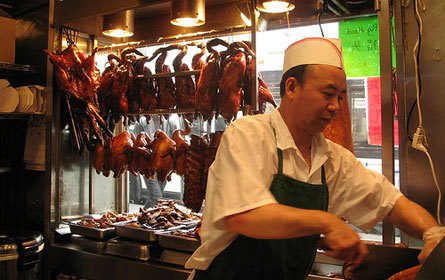 Photo source: Gotham Gazette
These days, it is impossible to tune out the heated debates and the raging controversies that surround the issue of immigration in the US. The presidential elections are only a few months away, and citizens are forced to reflect on what their vision of their own country is. As outrageous as the tones in this electoral cycle may appear, it is not the first time in the history of the US that migration takes center stage in the political landscape. The focus is usually on visible aspects such as the presence of undocumented immigrants, their role in the labor market, or their right to fully participate in the American projects as full citizens.
Attitudes and values about immigration are often shaped, if not determined, by everyday contacts and interactions among neighbors, fellow commuters and, let's not forget it, participants in the US food system. When it comes to what we eat, where food comes from, who prepares it for us, and who sits at our table, all bets are off. What we eat becomes us. Nothing is more straightforward, intimate, and visceral. Fear of the unknown is inevitable. As a consequence, the food of immigrants, redolent with peculiar aromas and bursting with unfamiliar flavors, easily becomes the object of deep ambivalence that goes beyond the gustatory and touches on the political. It stimulates attraction and revulsion, interest and refusal.
Two recent books provide useful insights into how these issues have played out-and still play out - in American culture. Melanie DuPuis's Dangerous Digestion: The Politics of American Dietary Advice explores the connection of the two fundamental questions "What to eat?" and "How to Govern?" in the development of American democracy. DuPuis notices how reformers such as Sylvester Graham and Ellen G. White, shared the goal of controlling and organizing "both physical and political bodies." They considered diet and nutrition as central for the moral integrity of the nation, echoing "the bifurcated view of Western society as a free and intact body that defines 'us' against a threatening and dangerous controlled 'them'".
However, the need for self-discipline to police boundaries and cleanse what's inside, eliminating anything that could be experienced as an invasive element, does not quench the apparently contradictory desire to project purity and authenticity in what's outside, which then becomes an idealized beacon of salvation. DuPuis points to the success of the Mediterranean Diet as an example of these dynamics. Why not recognize the nutritional benefits of "the bean-and-corn centered Mexican cuisine," though? The author indicates that there is more at play than just the healthiness of ingredients. In fact, she reminds us how social workers in the early twentieth century actually tried to convince Italians to eat more meat and dairy in the attempt to make them more American, almost to neutralize their foreignness.
In American history, migrants' dishes and food customs, at first targeted as alien and symbolic of other cultures' backwardness, have in time been integrated into the American diet. The case of Italian culinary traditions, now counted among the most popular cuisines in the US, is a perfect example of how foreign food can become "ethnic," turning into an important entryway for immigrant to access the American dream of success and full citizenship. In The Ethnic Restaurateur, Krishnendu Ray delves into the ethnic food industry from the point of view of the immigrant entrepreneur, the foreign cook and - to a certain extent - the possibly undocumented dishwasher.
Ray tries to understand how discussions of taste take place around ethnic foods and, above all, the immigrant working bodies that produce them. The author argues that "through these transactions there is a desperate search for authenticity by consumers... it is the craving for touch - its magic and its intimacy - in an increasingly , ocular, and aural world." The same bodies that can be read as threats are also the harbingers of a more direct and pleasurable relationship with the world around us. Nevertheless, not all ethnic cuisines are equal: Italian and Japanese cuisine now enjoy higher status compared to Mexican or Chinese, directly reflected in the prices that they can command. Ray looks at the possible reasons behind these differences in appreciation, observing that "proximity to poor ethnics undermines the prestige of a cuisine (as measured by price, although cheap ethnic food often acquires value as authentic)." In other words, too many immigrants can make their cuisine too close for comfort, undermining its potential for commercial success.
Both books bring the theme of immigrant integration - or lack thereof - into the fabric of everyday life, and in particular into food, often excluded from political discussions. Nevertheless, it is precisely at the level of daily experiences that important negotiations between American and foreigners, "us" and "them," take place. We can't forget that meals unite and divide, connecting those who share them and excluding those who are not entitled to participate.